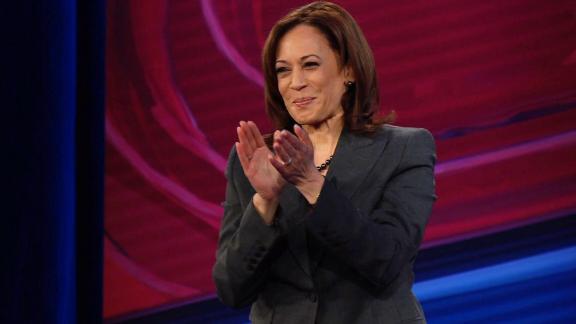 During a CNN town hall in Iowa, Democratic presidential contender Kamala Harris discussed not needing a male Democratic candidate to challenge and win against President Donald Trump in the 2020 presidential election.

There's a long way to go before the Democratic Party picks its nominee for the presidency. But this week, it's Kamala Harris' race.

The senator from California's performance at a CNN town hall Monday night solidified her standing as a leading contender. She was fluid and engaging, striking that always-tough balance (for women, at least) of being both authoritative and warm. She also took solidly left positions on a slew of important topics. Still, there were moments where Harris didn't quite clear the bar -- most notably her comments on her own history as a prosecutor, which is shaping up to be a weakness for an otherwise resolutely progressive candidate.

Politics, for better or worse (usually worse), is about style over substance, and Harris was an ace. She hit all the right notes: cool, collected and poised when answering weighty policy questions and somewhat silly queries about the #MeToo movement dividing men and women, impassioned when defending DACA beneficiaries.

After a young woman stood up and identified herself as an undocumented immigrant who was brought to the United States as a child, and who was sick of seeing her life used as a political football, Harris commended her "courage" and then continued, "I will say to you that I stand with you. There are so many who do, and we should not be trading on your life for the sake of the political games that this President is playing in trying to vilify young people like you, who are doing nothing except being productive and believing in and living the American dream."

Harris also brought her straight-shooter style. In response to a question about gun control, her answer was jarring (and necessary): "Here's what I think," she said. "I think that somebody should have required -- and this is going to sound very harsh -- I think somebody should have required all those members of Congress to go in a locked room -- no press, no one else -- and look at the autopsy photographs of those babies. And then you vote your conscience. This has become a political issue."

When was the last time you heard a politician speak in such raw and powerful terms about one of the most divisive and deadly political issues of our time?

Harris was disciplined and on message, even when faced with questions about her record as a prosecutor, a potential liability among progressives. On race, always a complicated issue in America, she struck an Obama-ish tone, recognizing the historic nature of her campaign without making the case that her candidacy hinges on her being a "first." (Among her firsts, Harris, who is the daughter of Jamaican and Indian immigrants, is also the first woman of color, first woman and first Asian-American to become attorney general of California.) She quoted her mother: "You may be the first to do many things, but make sure you're not the last." It's a savvy way of addressing identity in a country where open discussion of race brings discomfort to a lot of white people.

But that doesn't mean she was light on the substance. Harris took positions on a series of issues that would have been radical even a few years ago: backing Medicaid for all, a "Green New Deal," and even doing away with private insurance entirely (a claim she may have to walk back). Harris is a serious contender, and it is to the credit of the progressive left, often inspired by Sen. Bernie Sanders, that these positions are now mainstream among Democrats. Political discourse and, hopefully, our policies will be better for it.

Where many on the left, myself included, still want clarity from Harris: criminal justice. She did answer a question about her history as a prosecutor, and had a message that no doubt appeals to most Americans: that "as a prosecutor, my duty was to seek and make sure that the most vulnerable and voiceless among us are protected," that she was also a reformer of a broken system. These are claims that have been called into question by many progressives in the criminal justice space, most notably Lara Bazelon in The New York Times.

According to Bazelon and other critics, Harris wasn't as progressive a prosecutor as she now claims; her office, they say, withheld evidence from defense teams that could have tipped the scales of justice. (In her article, Bazelon sought a response: "Harris says that as a career prosecutor, she takes allegations of misconduct very seriously. 'My office evaluates each case based on the facts and the evidence,' she told me.")

Harris' answer at the town hall will likely be the one she sticks to going forward -- and it's one that will resonate for many. It's also one that will surely be deemed insufficient for those who have a particular focus on our broken justice system, given that Harris didn't really answer for her own history. Harris should take the time to address criminal justice groups directly and speak to the issues where they are demanding answers, including on her record and her plans going forward.

Whether Harris is the nominee or not, the fact that she, Elizabeth Warren and Kirsten Gillibrand are all in the race is heartening for all of us who want to see a strong challenge to Donald Trump.

The Democratic bench is deep, and this primary will be a contentious one for the best reason: because there are so many excellent, qualified candidates. The primary is a long way away, and there will no doubt be significant ebbs and flows as some candidates surge and others retreat. But on Monday night, Harris pushed to the front of the pack.

People vaccinated against Covid-19 can go without masks indoors and outdoors, CDC says

Eugene boy who fell out of window remains in hospital

Planning an outdoor gathering? Here's what you need to know