C.J. Anderson was helping children before Rams called him for Super Bowl run 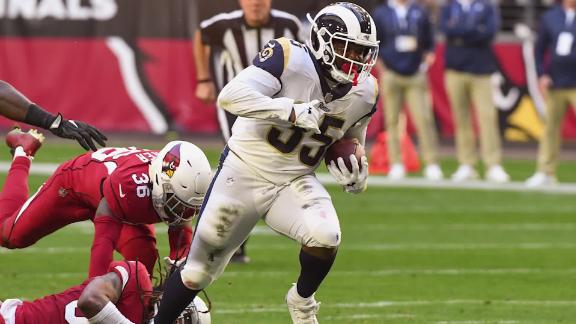 He was cut by three teams in the year 2018, yet here is Los Angeles Rams running back C.J. Anderson, trying to win another Super Bowl.

It feels a bit surreal that he will be facing the New England Patriots in Super Bowl LIII. Just over a month ago, Anderson -- who won Super Bowl 50 when he was with the Denver Broncos -- wasn't on a football team.

He figured his season was over. He was moving out of his house, and he decided to shift his work toward his foundation, which helps inner-city kids in Vallejo, California, where he grew up.

But then the Rams called. Their starting running back, Todd Gurley, had a knee injury, and they needed some help.

All of a sudden, Anderson, 27, was heading to Los Angeles. He signed with the team on December 18 and has been living in a Los Angeles hotel since.

"I couldn't believe they called. ... I just think it was the perfect opportunity," Anderson said in an interview with CNN's Coy Wire.

"You know, I think the timing was a fit there -- the veteran and the leadership that I bring. This will be my third Super Bowl that I'm playing in, (as well as) playing in plenty of playoff games and big games."

Anderson was raised by his mom and grandmother in the Bay Area. He still doesn't know his dad, "which I'm fine with," Anderson said. "I'm at peace with that."

He won't reveal who was involved, but when he was young, he saw drug raids in his house, which he thought was normal.

"I thought athletics was a way out," he said.

After starting his college career at Laney College in Oakland, Anderson went to the University of California at Berkeley, majoring in interdisciplinary studies, and played for two seasons.

Anderson went undrafted, signing with the Broncos as a free agent on April 27, 2013. He appeared in two Super Bowls with Denver, winning Super Bowl 50 in Santa Clara in 2016.

After he was cut by the Broncos in April, Anderson started the season with the Carolina Panthers, but he was released November 12. He found another team in the Oakland Raiders, signing on December 5. However, he was released less than a week later.

At that point, teams were preparing for playoff runs or looking ahead to 2019. As a free agent, Anderson figured he was done playing until next season.

So, his focus shifted away from football to his Dreams Never Die Foundation, which he started in 2016.

The foundation has partnerships with tech companies, and its purpose is to provide inner-city youth in his hometown with resources outside athletics and entertainment "because that's all kids in my neighborhood and I grew up (with)," Anderson said.

His life-after-football plan is taking shape. But that will have to be on hold for at least a few more days.

Anderson acknowledges that this is Gurley's team. But his veteran presence could be key. The Patriots have 36 players who have played in a Super Bowl. The Rams have four. Anderson's advice: Even though it's the biggest game of the year, it's still the same game they've played all season.

Governor Brown outlines what Phase II will look like; county plans 'under review'

Child under age of 5 among new Lane County cases