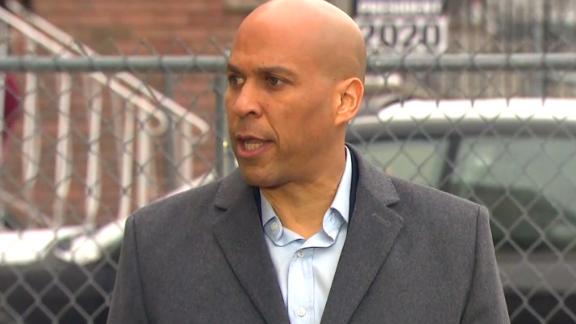 After announcing his 2020 candidacy for president, Sen. Cory Booker (D-NJ) spoke to reporters about a need for unity and a leader who understands patriotism.

Sen. Cory Booker's announcement Friday that he will run for president is not only another sign of the historic diversity of the Democratic Party as it heads into the 2020 presidential primaries. It is a demonstration of the power of former President Barack Obama's legacy in American politics.

On the night of Obama's election victory over John McCain in 2008, there were celebrations all over the country among Americans who sensed the significance of the moment. A nation born at a time of slavery had just elected an African-American to the highest position of power. Gallup reported that more than two-thirds of the country believed the election was one of the top three moments of progress for African-Americans in the past hundred years.

In Chicago, about 200,000 people crowded into Grant Park to watch Obama deliver his victory speech. Crowds gathered in the streets all over the country, and all around the world, to chant "O-Bama! O-Bama!" Oprah Winfrey, who was at the celebration in Chicago, captured the sentiment that night when she explained: "It feels like hope won. It feels like it's not just victory for ... Barack Obama. It feels like America did the right thing."

Then the cynicism set in. Democrats as well as Republicans raised questions about the meaning of Obama's historic election victory.

The euphoria that was felt all over the world that November evening has been replaced with a hard-edged skepticism, because certain events can't be forgotten -- like a series of controversial police shootings of African- American men, a racist "birther" movement that gained airtime in the national media falsely questioning Obama's legitimacy, the election of Donald Trump, as well as the horror of neo-Nazis marching down the streets of Charlottesville chanting vile anti-Semitic and racist comments.

By the time that President Trump unleashed his full-throated midterm campaign message last October that stoked nativist fears about a caravan of migrants trying to "invade" the US, Obama's presidential election seemed a world away.

But Obama's election night was in fact historic and we are starting to witness its impact on mainstream party politics. The Democratic primaries are already showing how his success transformed the political playing field.

As the nation celebrates the first day of Black History Month on Friday, it is stunning to watch the the diversity of Democrats who are running or considering running in the primaries: four women (Sens. Elizabeth Warren, Kamala Harris and Kirsten Gillibrand, and Rep. Tulsi Gabbard), one who is an African-American and another who is Hindu; one gay married man (South Bend, Indiana, Mayor Pete Buttigieg); the son of Taiwanese immigrants (Andrew Yang); a Latino who is the son of immigrants (Julian Castro); and now an African- American man (Cory Booker).

While there will be a number of white men in the race, the level of diversity is already remarkable by historical standards. What's more, many of these candidates, such as Sens. Booker, Harris and Warren, are considered potential front-rank contenders.

This year's presidential primaries add to the historic events in 2016 when a female candidate, Hillary Clinton -- who secured the nomination -- faced off against Bernie Sanders, a Jewish American.

The diversity of the candidates complements the new class of Democrats in Congress. Within the cohort of women entering Capitol Hill, the new members include the first Muslim women in Congress (Rashida Tlaib and Ilhan Omar), the first Native American women elected to Congress (Deb Haaland and Sharice Davids), Massachusetts' first black congresswoman (Ayanna Pressley), and the first woman whom Iowa has sent to the House (Abby Finkenauer).

And the most prominent new member is Alexandria Ocasio-Cortez, who comes from a Puerto Rican family and is the youngest woman ever to be elected to Congress. In her first few weeks, she shook up Washington with talk of progressive taxation and a Green New Deal. Many Republicans have not liked the fact that when they criticize her, she hits back hard.

Of course, it would be naïve to think that the Democratic presidential candidates won't face enormous obstacles because of the social biases that are still deeply rooted in our country over matters such as race and gender.

Yet it would be an equally bad mistake to ignore the reality that this is not your grandfather's Democratic Party anymore. In fact, it is Obama's party.

Having diversity among our political leaders matters a great deal, because it helps to shape expectations for the next generation as to who can legitimately think they can lead this country one day. It will also produce new sensitivities in our political debates to questions that keep getting left off the agenda.

While there is still a great deal of work to be done to make progress on the policy failures that allow for social injustice and hierarchy to survive in the daily lives of Americans, it is vital to acknowledge the historic changes that we are seeing before our eyes as the 2020 election gets underway.