Kickers sometimes are an afterthought, but they are key to Super Bowl success 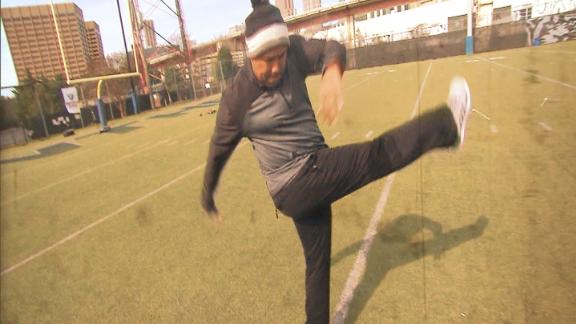 Football fans see it almost every year: A team's season coming to an end because of a missed field goal by its kicker.

An NFL-record 73 games were decided by three points or fewer this season. In this season's NFL playoffs, the Chicago Bears' season ended on a kick by Cody Parkey that bounced off the upright.

But a kicker has also been the source of other fans' euphoria, like when Los Angeles Rams kicker Greg Zuerlein made a 57-yarder in overtime against the New Orleans Saints to reach Super Bowl LIII. It was the longest game-winning field goal in postseason history. Zuerlein also converted a game-tying 48-yard field goal in the fourth quarter.

"We wouldn't be here if it wasn't for him," Rams head coach Sean McVay said.

They aren't the league's highest paid players. In fact, many make close to the league minimum, but there's a chance that the hero -- or the failure -- of Super Bowl LIII on Sunday at Mercedes-Benz Stadium could be New England Patriots kicker Stephen Gostkowski or Zuerlein.

Both kickers in this Sunday's Super Bowl agree that kicking is more cerebral than anything.

"Probably 90-10 I would say mental to physical," Zuerlein said. "I think a lot of kickers have the mental and physical abilities. It's just that upper, upper top percent, whatever that may be, that separates college kickers from NFL kickers."

Said Gostkowski: "I mean, obviously you need the physical tools to do it. If you can't kick, you can't kick. But once you have those done, it's 95 percent mental for sure."

The first two Super Bowl wins for Patriots quarterback Tom Brady and head coach Bill Belichick came on field goals from their kicker at the time, Adam Vinatieri, in the final seconds: in 2002 against the then-St. Louis Rams and 2004 against the Carolina Panthers.

Their kicker for the past 13 seasons is a guy who is about as steady as they come in Gostkowski. He's played for the Patriots since 2006, helping them win two Super Bowls. This will be his sixth appearance, tying Mike Lodish for second-most Super Bowl appearances in NFL history behind Brady, who is heading into his ninth.

Gostkowski is second all-time in postseason points with 198, behind Vinatieri's 238. His 37 career postseason field goals are tied for the third most in the postseason.

"To me I like to be in the games where they're close, and I just think it makes it easy to focus when the kicks really matter," Gostkowski said.

But even he is vulnerable to the rare miss. Last year, early in the second quarter in Super Bowl LII in Minneapolis, Gostkowski missed a 26-yard field goal. Even though it came from a low and bobbled snap, the miss was surprising. He also missed an extra point in that loss to the Philadelphia Eagles.

According to Thursday's pool report, Zuerlein did not kick in practice, which was held at the Atlanta Falcons practice facility in Flowery Branch, Georgia. He was a full participant on Friday. The Rams had been cautious with him this week, as he previously had suffered a strain in his left foot, which is his plant foot.

McVay previously has said that he doesn't anticipate it would be anything that would prevent him from being able to play Sunday. The injury, which occurred while warming up at halftime of the NFC title game, has healed.

"He felt good," McVay said Friday. "He hit the ball well. He hit the kickoffs and his field goals really well. That's kind of what we expected; that's what we hoped, and he'll be ready to go."

Meanwhile, the Patriots reviewed all the kicking situations -- field goal, kickoff and punt -- in between the periods when the offense and defense were working Thursday at the team's practice at Georgia Tech. Per the pool report, specialists did not kick in the walk-through. They kicked Wednesday at Mercedes-Benz Stadium, and were scheduled to do so Friday as well.

This Super Bowl could come down to the leg of either Zuerlein or Gostkowski, and as Rams special teams coordinator John Fassel puts it: "When you got a big kick, you gotta make it."

"You go out there, you don't get another chance," Zuerlein said.

When can you be around others? CDC updates coronavirus guidance