What Trump does during his 'executive time' 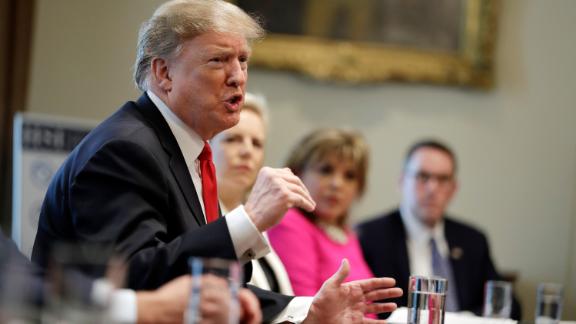 Since the day after the 2018 midterm elections, President Donald Trump has spent around 60% of his scheduled time in unstructured "executive time," according to a report from Axios.

Someone who is close enough to possess President Donald Trump's personal schedules, and wise enough to be appalled, has offered the world a new view of the Narcissus of 1600 Pennsylvania Avenue: 51 private schedules provided by an unnamed White House source — an accounting of "nearly every working day since the midterms."

Filled with hours of so-called "executive time," the calendars reveal a President devoted to studying himself in the reflecting pool of the media and poll numbers, but not so engaged in the business of the American people.

First published by the inside-Washington website Axios, the leaked calendars suggest Trump is generally so busy with personal matters -- styling his hair, maybe? applying self-tanner? watching "Fox and Friends"? -- that he doesn't get to the office before 11 a.m. Once there he meets frequently with press aides -- who, it is safe to assume -- will help him study his own image and polish it for political and personal purposes.

Axios reporters Alexi McCammond and Jonathan Swan note — and say White House sources confirm -- that the President could be busy in ways that aren't noted on his calendar. He may be holding meetings off-schedule to avoid leaks from West Wing staffers. However, even with these considerations, Trump seems to keep an exceedingly light White House schedule, especially compared with President Barack Obama, who sometimes worked to the early morning. And George W. Bush typically was in the Oval Office before 7 a.m., had his first meeting at 8:15 a.m. and scheduled his days in 10-minute blocks, until quitting time at 5:30 or 6 p.m.

Presidential travel days aren't quite so relaxed, but generally speaking, if his schedule is actually what the Axios documents suggest, then it is less crowded than a first grader's. Consider the first calendar in the Axios file. Three full hours of something called "executive time" -- let's call it ET -- started Trump's day on November 7. He finally held a single Oval Office meeting at 11 a.m., according to the schedule published by Axios. This was followed by lunch, and then three more hours of ET. Like a lazy student's term paper, the schedule is typed with big margins and lots of double spacing, but even then doesn't fill half a page.

The calendar for November 8 looked busier but still included more than four hours of alone time and called for less than three hours of serious in-office work. The rest of the day, as scheduled, was devoted to ceremonies. A week later, on November 15, the Axios documents indicate nearly four hours blocked out for ET before Trump was scheduled to get to the office. By 5 p.m., said the schedule, he would have snagged nearly two more hours of alone time.

DJT sure likes his ET.

And the way his staffers talk about executive time would suggest it's normal for top-level leaders to block out great swathes of the day for unorganized activity.

In fact, the term was coined by the White House and given meaning by spokeswomen Sarah Sanders, who has suggested the President uses these periods for high-level consulting. That would apparently include the time the President uses to conduct spontaneous tours of the West Wing, including -- according to a new book by ex-White House aide Cliff Sims -- directing visitors to the place where President Bill Clinton and Monica Lewinsky may have had sex.

In "Team of Vipers," Sims wrote that Trump explained to one visitor, "I'm told this is where Bill and Monica" but didn't finish the sentence. Sanders hasn't commented on that particular nugget but has said that "the president is proud of the White House and its rich history" -- and has pushed back against the idea that Trump's executive time indicates he is disengaged.

This argument hasn't won the day. The BBC, in a recent article, calls ET a new euphemism—thanks to the Trump administration coinage-- for more common types of dawdling including "social media use, calling friends and napping."

We do know the President is devoted to tapping out messages for his followers on Twitter and that he enjoys calling longtime friends on his personal phone. As recently as October, intelligence experts warned that foreign powers were almost certainly listening in on Trump's calls, which involve lots of gossip, advice-seeking, and requests for feedback on his performance. The President apparently uses his interlocutors as a mirror. In December some of his friends told The New York Times that the President seems more isolated and still "views the presidency through the lens of a television showman."

The showman in Trump is the one who speaks of a candidates' announcement of a presidential bid as an "opening act" and posts an old video of himself singing in a farmer's costume to note the recent signing of a farm bill. Ever eager to spin criticism, Trump's defenders, including Newt Gingrich, used news of the President's light work schedule to compare him to Winston Churchill and Ronald Reagan, who led their countries while getting plenty of rest.

On the day of George H.W. Bush's state funeral, Trump attended -- working until about 1 p.m. -- and then appeared to take the rest of the day off: four hours and 55 minutes of ET were blocked out for the remainder of the afternoon, according to the Axios documents. Another president might have invited his predecessors back to the White House. But Trump, who functions as an insult-o-matic when he speaks of other presidents, is the odd man out in this exclusive ex-presidents club. It's possible his ego couldn't abide more time with the other presidents, who had generally ignored him at the service.

But don't take my word for all this. Peruse the documents released by Axios and you see the schedule of a man about as engaged in the presidency as an actor trying to create the impression he really is the commander in chief.

On one level this is disconcerting. One wants to ask: Shouldn't he be paying more attention to the job? But on the other hand, it may be a good thing that he's not fully engaged. As a part-time President, Trump has just given us a painful, longest-ever government shutdown. He has given us fruitless negotiations with North Korea, craven kowtowing to Vladimir Putin and high levels of public division and anxiety.

Imagine the problems he could create if he really applied himself.

UO students on edge after multiple suspicious incidents near campus

Man accused of looting, smashing windshield in May riot

GameStop's stock is going through some stuff. You can thank Reddit