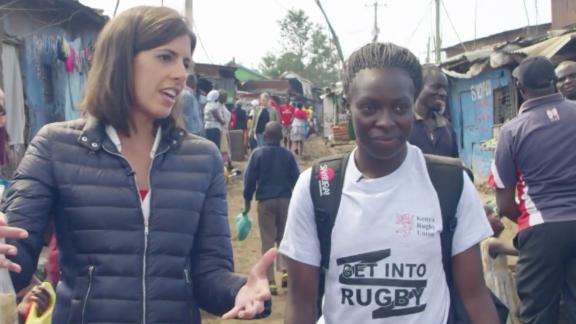 The Kibera slum outside Nairobi seems an unlikely place to find an international athlete, but for Kenya rugby sevens star Diana Awino it's the place she calls home.

Unemployment levels in Kibera, Africa's largest urban slum, are 50 percent, and only 20 percent of the houses -- largely shacks with mud walls and corrugated iron roofs -- have electricity.

There's one toilet for every 50 houses and only recently have two mains water pipes been installed.

"In order to survive there, number one you have to have a job, a paying job because you need to pay your rent," Awino tells CNN World Rugby. "You need to feed your family. It's really hard."

Needless to say, Awino, part of the Kenyan squad that last year won the Africa Women's Sevens title in Botswana, is something of an anomaly in the 2.5 million-strong population of Kibera.

She lives with her nine-year-old son and family. To realize her dream of playing for her country, she's had to make sacrifices.

"I normally see my son in the evening," she says. "Or maybe in the afternoons. I have to go to their school to see him because if I'm training in the evening at my club, when I go back I find him asleep.

"It's really hard ... I want to change where I live. I want to move to somewhere maybe better than where I am."

Bringing out the 'beast mode'

The Kenyan women's team, nicknamed the Lionesses, were crowned African champions and played in the Commonwealth Games -- finishing sixth -- and now they hope to qualify for the World Rugby Sevens Series. That would mean more funding, as well as regular tournaments against the best teams in the world.

The men's side offer a vision of how far Kenyan teams can go in rugby's shortened format after winning its first World Series title in Singapore in 2016.

The search for new female recruits, however, can be difficult, and changing the perception of rugby can be a challenge.

"Some people think, 'Oh, I don't want my daughter to play this game. It's very physical and very rough for the ladies,'" explains captain Philadelphia Olando.

"But once you get there, you feel the impact, the physicality -- it's very addictive. It makes you more competitive and it brings out the beast mode in you as a woman."

A Kenya women's league has recently been established, which has helped to grow talent, especially outside Nairobi.

Players come from different backgrounds, but Olando, part of the Kenya team that competed at the 2016 Olympic Games, insists that once an individual is part of the Lionesses squad, they become part of a much bigger family.

"We all wear the same jersey, the same boots, we play with the same ball," she says. "It doesn't make you feel like, 'I'm from the slums and I cannot fit in this game.' It's all about talent at the end of the day.

"The teamwork, the togetherness -- we fight for each other through thick and thin. If somebody has a problem ... maybe they are stranded in terms of paying their rent, we come together and fund raise for them because we need them on the field. We cannot just allow them to struggle alone."

READ: Why Georgia has rugby on its mind ahead of the World Cup

Kevin Wambua has coached the Lionesses for nearly seven years, in which time he's overseen a remarkable period of progress.

Teams like New Zealand, Australia and England are able to offer their sevens players full time contracts and state-of-the-art training facilities, but Wambua thinks his side can more than match its more prosperous rivals.

"I've seen them grow leaps and bounds since 2012 when some of them could not even catch a rugby ball to now actually becoming world beaters," he says.

"These players sacrifice a lot. Some of them come from very far away and wake up as early as 4:00am to come to training ... some of them even walk to training.

"Some of them have to leave their kids at home, some have to balance school and work. It's that resilience and that sacrifice that makes them one of a kind."