Matt Kuchar says he'll apologize to caddie and pay remainder of the $50,000 he requested 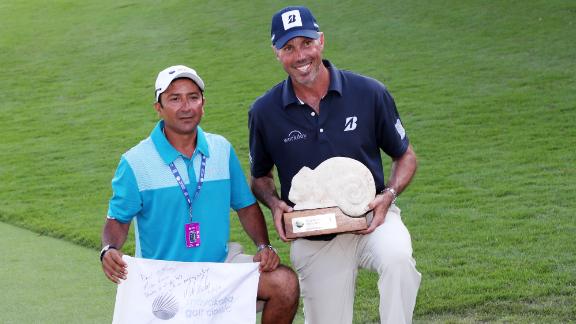 Pro golfer Matt Kuchar originally defended the $5,000 he paid his fill-in caddie after winning $1,296,000 at the Mayakoba Classic in Mexico, but issued a new statement saying he'll make the rest of the $50,000 payment that caddie David Ortiz requested.

Earlier this week, pro golfer Matt Kuchar defended the $5,000 he paid his fill-in caddie after winning $1,296,000 at the Mayakoba Classic in Mexico, his first PGA tournament victory in four years.

But on Friday, Kuchar issued a statement saying he'll pay the rest of the $50,000 that caddie David Ortiz requested.

"This week, I made comments that were out of touch and insensitive, making a bad situation worse," the statement said. "They made it seem like I was marginalizing David Ortiz and his financial situation, which was not my intention. I read them again and cringed. That is not who I am and not what I want to represent. My entire Tour career, I have tried to show respect and positivity. I let myself, my family, my partners and those close to me down, but I also let David down. I plan to call David tonight, something that is long overdue, to apologize for the situation he has been put in, and I have made sure he has received the full total that he has requested."

Kuchar also said he'll donate money back to the event to be distributed to charities.

"For my fans, as well as fans of the game, I want to apologize to you for not representing the values instilled in this incredible sport. Golf is a game where we call penalties on penalties. I should have done that long ago and not let this situation escalate."

The caddie of a winning golfer on the PGA Tour can expect to receive about 10% of his earnings. Ortiz knew that because he wasn't Kuchar's regular caddy he wouldn't receive that much, but he wanted more than the $5,000 Kuchar paid him.

After Ortiz, known locally as "El Tucan," had complained, Kuchar pushed back.

"I kind of think someone got in his ear," Kuchar told GOLF.com on Wednesday. "I was very clear and very upfront on Tuesday [the first day of the tournament] and he said 'OK.'

"Those were the terms. He was in agreement with those terms. That's where I struggle. I don't know what happened," Kuchar said.

Ortiz told GOLF.com that Kuchar's camp eventually offered him an extra $15,000 -- taking his total to $20,000 -- but Ortiz turned it down as he felt it didn't match his own valuation.

Ortiz typically makes up to $200 a day as a caddie at El Camaleon Golf Club, Playa del Carmen, where November's Mayakoba Classic was held.