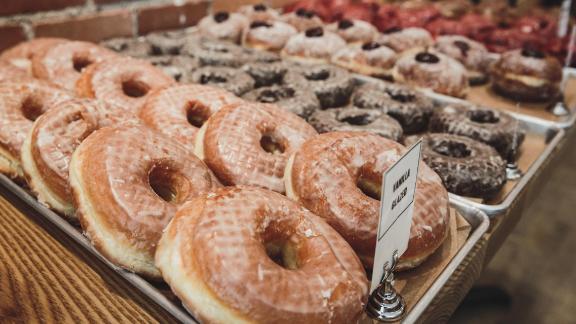 In our 'Fall in Love' series, explore all that Providence, Rhode Island has to offer including great Italian restaurants, a Water Fire festival and lots of art to see and buy. Learn even more about the city here.

Providence, Rhode Island, is the biggest city in America's smallest state, and it often gets lost between two of its neighbors, bustling Boston and elegant Newport. But coming to New England and skipping this city is a major travel mistake.

First things first: Providence is home to several incredible universities and colleges, most famously Brown University. Thanks to that, prices are affordable -- except sometimes during parents' weekend -- and the community close-knit.

The Rhode Island of School of Design (aka RISD, pronounced "Rizz-dee") counts some of the world's best artists and designers among its grads, while Johnson & Wales culinary school pumps out incredible chefs.

That rich culture makes Providence one of the USA's most impressive cities for people who love the arts, which is even more significant considering its relatively small size.

While Lil' Rhodey (the state's loving nickname) doesn't have a major opera or ballet company to call its own, the per-capita rate of art students, brilliant professors and champions of literature, public art and design in its capital city all add up to one hell of an experience.

Your biggest problem in Providence might be narrowing down the sheer number of places where you want to eat.

That said, you won't go wrong beginning a day at Knead Doughnuts in the downtown business district. The spot is classic when it comes to design (it's in a former bank building) and styles (jelly doughnuts, fritters) but utterly modern when it comes to flavors and techniques. The brown butter-pecan and pistachio flavors are both musts, and there are lots of vegan and gluten-free options.

If you want to linger for your morning meal, check out The Duck & Bunny, a "snuggery" (the cafe's word for place that is adorable and cozy) in the trendy Fox Point neighborhood.

There's an emphasis on cupcakes and other sweet treats, but during the day, it's a great option for settling in with a laptop or a good book. (Sad side note: there are no ducks. Or bunnies.)

On the somewhat healthier side, check out Yoleni's, a Greek market-and-cafe concept inspired by Eataly. You can pick up freshly made baklava, blocks of feta or bottles of olive oil to go or settle in for a yummy Greek-yogurt parfait in the airy downtown space.

While Scorsese movies make it seem as if Italian-American communities have stuck to big cities such as Boston and New York City, there is a vibrant and well-established community in Providence.

To see the community in action, head to Federal Hill, where more than a dozen restaurants are lined up along the main drag of Atwells Avenue. The options can be a bit overwhelming, so keep an eye out for the upscale Enoteca Umberto's, classic red sauce at Angelo's and pizza at Caserta's.

For dinner, try to get a table at Persimmon, the James Beard Award-nominated New American spot on the aptly named Hope Street.

While the menu changes often based on seasons and availability, there's not a single bum note here. Persimmon has the best of New England's farms -- from sunchokes and onions to duck and Maine lamb -- but is still cozy enough that you can ask what a menu item is without feeling embarrassed.

Providence's best hotel is The Dean, and even if you're not staying there, you should make the trip simply to eat at North.

This too-cool-for-school spot doesn't have a phone number or take reservations, but if you can muscle your way in, the reward is Asian-inspired small plates such as sake-glazed bok choy, spicy "dragon wings" and oysters with nori mignonette.

Making a night of it? If you can find Courtland Club, which is inside an unassuming building on a residential street, you'll be happily rewarded. The speakeasy-style bar has some of the most inventive cocktails in the country, with ingredients such as beet juice and basil foam somehow feeling accessible and delicious.

If your travels bring you through Providence regularly, consider investing in an annual membership -- besides having the option to leave a beloved bottle of booze in a locker so you never have to haul it over yourself, there are periodic tasting nights and the one-off dinners with a guest chef.

One note: if it's warm out in Rhode Island, you are contractually obligated to try a Del's, which is a New England brand of frozen slushy lemonade. The green and white striped stands pop up throughout the state once it's hot out, and some will sell peach or watermelon-flavored lemonades, too.

To truly feel like a local, you also can't leave without a stop at one of the outposts of Newport Creamery, which is famous for its Awful Awful milkshake with sprinkles inside it.

I came, I saw, I shopped

Get your first taste of the art and design scene in Providence at the RISD Museum, which has a huge collection of work from around the world, from Rembrandt drawings and Chinese lacquerware to an Eames chair and couture dresses by designers such as Balenciaga and McQueen.

Beyond the art, which could keep you busy all day, the building is also home to an outpost of locally beloved Bolt Coffee (the other is in The Dean) and a store that sells products made by RISD graduates, such as striped backpacks and totes from indie brand Baggu.

However, don't let that be your only shopping stop. Along Westminster Street, there are several local boutiques, notably Craftland, which sells jewelry, home goods, stationery and more from local producers and designers, and light-filled Symposium Books, where you can stock up on new and vintage records and books.

Providence is home to two breathtaking libraries, the Fleet Library at RISD and the nearby Providence Athenaeum, which is public.

The Fleet is in a stunning former bank building and is not only notable for its architecture but for its collection of rare art and architecture books, while the Athenaeum pays homage to writers with Rhode Island roots such as HP Lovecraft and Edgar Allan Poe.

To keep the theme of architecture and history going, head to the Rhode Island State House. This Neoclassical building was designed by the New York City firm of McKim, Mead & White, who are also known for the Boston Public Library and the Washington Square Arch in New York City.

There are free public tours of the building every hour during the week, although you should make a reservation if you are traveling in a group.

Among the must-sees are a Royal Charter from when Rhode Island was one of the 13 British colonies and the iconic Gilbert Stuart portrait of President George Washington. (You may recognize it from the one-dollar bill.)

The State House and Capitol are across the street from Providence's central train station, making it super convenient as your first or last stop in town.

It's not just arts and culture that make Providence so utterly livable. There are also green spaces that help balance out the city-to-country proportions.

First up: the 472-acre Roger Williams Park, which is known as "the people's park" in Providence. Besides being, well, a park, the area is home to plenty of warm and cold weather options, including the Roger Williams Zoo, a botanic garden, a carousel, a planetarium and the Museum of Natural History.

During the warmer months, you can enjoy Providence's waterways in two different, but both worthy, fashions. First is by taking a cruise along the Providence River, which provides not only an alternate viewpoint of the city's best-known structures but also some necessary history and context, from Rhode Island's colonial days through the World Wars to the present.

This art show and public spectacle takes place along the city's waterfront, where dozens of small fires are tended by "braziers," creating a thrilling effect that makes it look like -- you may have guessed -- the water is on fire.

The only drawback? You may have to fight locals for the best spot to view it -- even if they've been before, it feels new every time.

No charges for Elk Horn protesters; city declines to prosecute