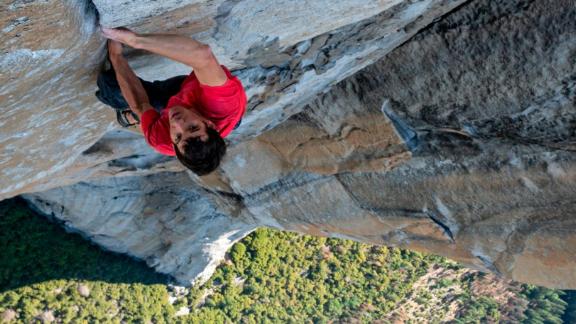 Alex Honnold was the first man to ever scale El Capitan without ropes. Now, his achievement is featured in the 2019 Oscar-winning documentary, "Free Solo."

Any doubts as to whether Alex Honnold was the greatest rock climber of all time were doused when the American did something that no one thought was humanly possible.

In June 2017, the 33-year-old became the first person to climb Californian granite monolith El Capitan without any ropes -- a skill known as free soloing.

There is simply no room for error. If he slips, he falls. If he falls, he dies.

"When I know what I'm doing and I'm climbing well, then it feels meditative, kind of relaxing and beautiful," Honnold told CNN Sport.

His achievement has since been immortalized in a breathtaking BAFTA-winning National Geographic documentary "Free Solo," which won Best Documentary at this year's Oscars.

READ: Ross Edgley -- 'It was goosebumps upon tears, upon smiles'

Free solo climbing is a high-stakes game. It's either death or perfection.

But in moments of such risk, adrenaline is often the enemy.

"For me to look up at the wall and to think I'm just going to climb this like I usually climb this, even though I don't have a rope on."

Honnold's seemingly blase approach to such death-defying challenges can be disconcerting at first but scratch under the surface and you understand it's an attitude built on a foundation of hard-work and preparation.

"If I don't know what I'm doing and I hesitate then it can be a nightmare," he warned.

The truth is that every move is choreographed. Each foot hold has been mapped out months in advance, every thumb grip visualized hundreds of times.

The trick to not falling, is not leaving anything to chance and training your mind for every possible outcome.

"It's definitely a bigger mental challenge than it is physical," he said, explaining that he and many others have climbed the rock face multiple times with harnesses attached.

"But the idea of doing it without a rope is a step further it seems."

Honnold chose to climb the southwest face of the wall, a familiar route known as Freerider, which is split into 30 different pitches.

But this particular route included a perilous sequence which spooked the seemingly unflappable Honnold -- the Boulder Problem.

The section involves a number of intricate movements with Honnold clinging onto pea-sized ledges 2,000 feet above the meadow below.

It culminates in a vertigo-inducing karate kick to an opposing wall, where his life depends on whether he makes contact with a toe-sized ledge.

READ: Kilian Jornet -- 'It's like meditation. It's beautiful to feel that small."

"I think if that section of the route hadn't existed [...], I probably would have soloed El Cap several years sooner," said Honnold, who had practiced that particular section 60 times with ropes -- falling on a number of occasions.

However, the very thing that made this section so daunting turned out to be an advantage because by the time Honnold had reached it he had found his rhythm. He was confident.

"I had done so much climbing, I was so deeply in the zone," he said, talking through the delicate sequence of moves.

"I was performing so well that by the time I got there I felt incredible and I just executed it perfectly."

After successfully navigating the near impossible Boulder Problem, Honnold started to breathe a little easier but he still had a long way to go.

The final stretch represented one of the hardest climbs Honnold had ever attempted, but nothing was going to stop him now.

"My confidence was soaring, I felt great," he said. "Conditions were perfect and I kind of knew I had it."

As he approached the summit, the realization of what he was about to achieve started to break through his steely-eyed focus.

The final stages of El Cap got easier and easier. What to many would seem terrifying became a "beautiful experience" for Honnold, who sprinted toward the finish, lifting himself over the summit after just three hours and 56 minutes of climbing.

"It was incredible," he laughed.

The unfathomable climb was nearly 20 years in the making.

Growing up in the Californian suburbs, Honnold had started scaling indoor climbing walls at a local gym as a child. In many ways, it was a sanctuary.

Honnold struggled with socializing as a youngster but was able to express himself through climbing, gradually transitioning to outdoor climbing as he sought out new challenges. Moving on to free soloing -- climbing without ropes -- was a natural progression.

"It was an important part of rock climbing for me," he said. "It wasn't all of climbing and never has been to me. It's just one part of climbing but it's free soloing, it's awesome, it's fun."

READ: Anna Gasser -- 'As I took off I knew there was no way back,' says snowboarder

Living and traveling in a small van, Honnold spent his days climbing -- getting better and more confident with each step.

He started completing increasingly impressive feats but El Cap was always at the back of his mind.

Ascending the monolith is regarded as the pinnacle of rock climbing, so making history by becoming the first person to scale it without ropes certainly appealed, but he also simply wanted to experience it.

"I'm sure every astronaut wants the opportunity to walk on the moon but if you're the first human to ever go to the moon, it's an incredible thing," he said.

"But I'm sure the tenth astronaut is just as excited in their own way." Some of Honnold's friends have died tackling lesser challenges.

It's a stark reality that doesn't sit well with his girlfriend, Sanni McCandless, who left Honnold alone in the days running up to the climb.

"It just seemed like the right call for both of us. We never really had to talk about it," he said.

"It was useful for me to have empty time to just lay around by myself and visualize or imagine and just emotionally process what was to come."

When you consider the mental fortitude required, it's easy to ignore the physical strain such a climb puts on a body.

On one section of the wall, the Monster Offwidth, Honnold squeezes his body into a vertical crack and wriggles his way up a 200-foot-tall crevice. No flashy gym or high-tech equipment can ever prepare you for such a task.

Instead, Honnold's physique has been etched by thousands of hours of climbing and his hands strengthened by days clinging onto rock faces.

Standing at a little under 6 feet tall, and powered by a mainly vegetarian diet, Honnold's body is conditioned solely for climbing.

His mind has also adapted accordingly.

During the documentary, Honnold undergoes an MRI scan which shows his amygdala -- the part of the brain which processes fear -- is not stimulated in the usual way.

Honnold believes he's become desensitized after so many years of climbing but is open to the suggestion that he's innately less susceptible to fear.

"I found free soloing scary when I first started but I also found it exhilarating in the right way," he said.

"Possibly, other people find it way scarier and less satisfying so they are never really willing to put the time and effort into it because the ratio is not right."

He likens it to his previous fear of public speaking. As a young man, Honnold struggled in front of large groups and the thought of doing a media tour would have previously "horrified" him.

Directed by award-winning film-makers Elizabeth Chai Vasarhelyi and Jimmy Chin, "Free Solo" follows Honnold for more than two years as he prepares for the climb of his life.

However, keeping the cameras at a distance was imperative in order to keep Honnold safe and allow him to have the experience he was craving.

"When I passed the cameramen on the wall, it was just really nice to be able to see my friends up there and celebrate with them," he said.

"Most of the filming is up high on the route so I had already finished most of the harder sections. It really did feel like a celebration."

Despite the global success of the film, the achievement will always be a personal one.

"When I'm an old man and I sit in El Cap meadow, below the wall and I look up at the wall, I'm going to feel the same satisfaction knowing that I've had a dream for so many years, put a tonne of work into it and eventually was able to accomplish it," he said.

DMV services to resume through appointment only