'Just crazy': How it felt to win the Mexico ePrix on the line 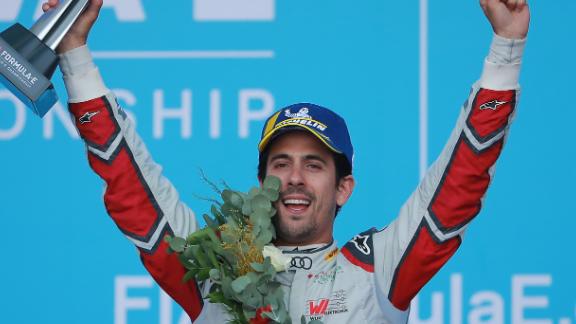 We don't know the energy levels of everyone at any time. Just sometimes you have these numbers from TV.

But that still does not mean that you can overtake. You can defend quite easily in Mexico, so the situation was that I was putting pressure on Wehrlein during the last few laps to make sure he was also under pressure to use energy -- and then in the last lap just run out of it.

So that was actually a perfectly executed strategy!

I didn't know Wehrlein was going to be penalized [for cutting the chicane], but I knew that move was not correct from what we agreed on at the drivers' briefing.

He's saying that he didn't gain position but he gained energy because if you have to stop and re-accelerate, you have to use a lot of energy to accelerate a car.

He just coasted straight, so he gained a lot of energy compared to me because I had to stop the car, do the chicane and accelerate again.

So it might have been the case if did that chicane, he does not finish the race.

I cannot even describe it ... it was was so dramatic. I had so much adrenaline! I really wanted to win that race so much that when I did it in the last few meters, I could not believe it myself!

When I crossed the line and realized I'd won, I could hear the crowd on the straight shouting. I was just super pumped and was shouting on the radio to thank the team.

And it was just crazy after, I had more adrenaline than usual. For example, you could dominate a race from the beginning, kind of expecting to win so the last like three laps you're building up to say: 'Okay, the race is under control, I'm going to win it, I'm going to win it.'

So if you dominate, you have a gap. But that moment I didn't know I was going to win it until like the last second, so the adrenaline was just ... a burst of emotions when I crossed the line.

I couldn't even celebrate that hard because we had testing the next day! Still I went for dinner with some friends and had a chilled night but I was super happy.

We had good fun at the dinner and the next day I had to wake up again at seven to go to testing.

But my family flew back from Brazil to our home in Monaco so now I have my small baby, who is seven months old, and my wife at home with me all the time -- I'm going to celebrate these little things.

I don't get nervous at all. I think I sometimes get slightly excited about the race and if you're fighting for a championship of course you stay a little bit more tense, but that does not change my approach at all.

Trying to eat well is very important. In some countries, like in Mexico, it is quite tricky, so you try not to eat raw stuff, salad and sushi and fish, this type of stuff which it's easy to get a bad stomach from.

I don't have alcohol at all when we are at a race location! Normal breakfast I would have eggs with avocado and dinner probably a steak and potatoes, or pasta depending on what you feel like.

It's not really a very, very specific meal that I need to eat. During the race day we eat very light meals -- you cannot have a steak during lunch time during racing!

Normally I just have quinoa with vegetables and little bit of chicken.

For the flights when the time zone is more than five hours, we try to arrive Wednesday lunchtime, Wednesday morning, so three days before the race.

Wednesday is our chill out day, so we do some sightseeing to try and get used to the time zone, go to the gym and in the afternoon if you're tired try to sleep at the right time and wake up at the right time to get the cycle correct.

Then Thursday normally we have our PR activities during the day, so in the morning we shoot some videos for Audi, then in the afternoon we have a lot of interviews and some other PR to do.

Then Friday is the day that we go to the track and spend the whole day on the track, do the track walk. So pretty much technical stuff.

We have the meeting in the morning to decide what we will do for the whole weekend. So it's very structured technical analysis on Friday and then Saturday ... just like madness.

We wake up super early, six in the morning, and then ... I don't sleep very well during a race weekend but that has been normal in my career.

I sleep five, six hours a day and especially with the time zone it's even worse than that. Sometimes you have no sleep, but because you rested the whole week, it's not a problem to have one bad night of sleep.

After free practice you need the time to watch the data very closely, then you have practice 2 and then have qualifying.

For me this is probably the most tense moment of the day -- just before qualifying. Qualy is so important and it's so critical that you don't make any mistakes ... you basically have one lap.

If you miss or anything happens, yeah, your day is pretty much over! So that lap in qualifying is probably the most stressful, important moment of the day -- even more important than the race itself.

I try to not use my energy in stuff that you don't need to, you're just focused on stuff that matters. Saying hello to everybody and trying to make conversation, people often come up to you and want to talk during the race day -- but that's part of the game.

Sometimes you just try to hide yourself in a corner, stay within your zone, try to focus on what you need to do in the race.

Chinook returns in Columbia River could be near-record low