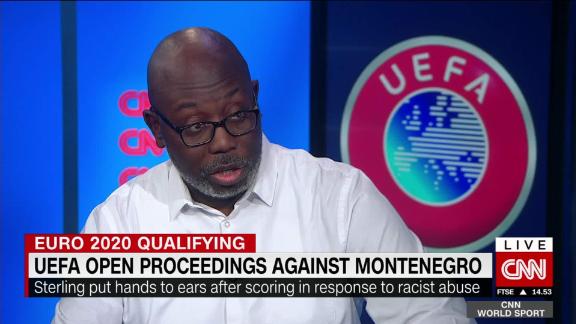 Football journalist Darren Lewis is "not shocked" by the racist chanting directed at England during its Euro 2020 qualifying win in Montenegro.

England star Raheem Sterling has called on football's authorities to do more to tackle racism after he and his teammates were subjected to racist abuse during England's 5-1 Euro 2020 qualifying win in Montenegro.

Racists chants were reportedly directed at a number of England players, with defender Danny Rose subjected to monkey chants towards the end of the match, when the Tottenham player was being shown a yellow card.

After scoring his country's fifth goal in a resounding win in Podgorica, Montenegro's capital, Sterling cupped his ears towards a section of the home support and later posted a picture of his celebration on Instagram with the caption: "Best way to silence the haters (yeah I mean racists)."

The Manchester City forward, who has scored six goals in his last three internationals, has said he wants football's authorities to take a "proper stance" on racism.

Speaking to Sky Sports in the mixed zone after the match, Sterling said: "All of us know what skin color we are so they're not saying anything new.

"It's 2019, I keep saying it, and it's a shame to see this keeps going on. We can only bring awareness and light to the situation. It's now time for the people in charge to put a real stamp on it. You've got to punish people a bit harder, you've gotta do something that makes them think twice.

"If you can't play in front of fans then that's going to make them think harder. Me and the FA can only do so much, we've got to leave it to the people in charge to make a proper stance on it."

Later on Tuesday, European football's governing body UEFA said it had opened disciplinary proceedings against the Football Association of Montenegro for five charges, including racist behavior, crowd disturbances, setting off of fireworks and throwing objects. The case won't be heard until May 16.

"We had an excellent performance and have an 18-year-old [Callum Hudson-Odoi] being interviewed after the game having to respond to what's happened when his evening should be about the joy of his full debut.

"I didn't hear during the early part, but I'm told there were things in the early part of the game as well. I certainly heard when Danny Rose was booked. It was clear to everybody. It's unacceptable.

"I've spoken to our players individually. We've got to support them. We will report it. That reporting is already in place because so many people in other areas of the ground heard it. I believe the UEFA delegate also heard it.

"The players in the dressing room know that as a group of staff and organization, we're there for them. That's the most important thing."

Speaking to BeIN sports, the teenager said: "I don't think discrimination should be anywhere.

"As I said, we're equal, we have to play a fair game and enjoy the moment but when you're hearing stuff like that from the fans it's not right, it's unacceptable and hopefully UEFA deal with it properly because when I went over there and heard it, they were saying monkey stuff.

"We just have to keep our heads and a strong mentality and obviously, hopefully, [Danny Rose] Rosey is okay as well and if anything we will have a chat and discuss what happened. He's got a strong mentality, he's a strong guy."

Hudson-Odoi went on to say that teammate Sterling had spoken to him about racism in football.

Sterling the 'measured voice for good'

Sterling has developed into not only England's most influential player on the pitch -- scoring a hat-trick in the team's comprehensive win over the Czech Republic at the weekend -- but a powerful voice off the field, too.

As former England striker Gary Lineker posted on Twitter: "He's not only one of our most important players but @sterling7 has become an intelligent, assured and measured voice for good in our game and our society."

In a powerful column for the Players' Tribune last year, Sterling called out sections of the English media for their constant criticisms of his lifestyle, saying "they hate what they don't even know."

Last December, the former Liverpool player was the victim of alleged racist abuse during an English Premier League match at Chelsea and afterwards accused some sections of the media of helping to "fuel racism" with their portrayal of young black footballers.

In an Instagram post, Sterling highlighted how young black footballers were being treated differently, screen-grabbing a MailOnline article about young City player, Tosin Adarabioyo, and comparing it with an article on another young City player, Phil Foden.

Both players had bought multi-million dollar homes for their mums. The headline for Adarabioyo read: "Young Manchester City footballer, 20, on £25,000 a week splashes out on market for £2.25m despite having never started a Premier League match," while the story on Foden published a few months earlier read: "Foden buys new £2m home for his mum."

Sterling wrote on Instagram: "The young black kid is looked at in a bad light. Which helps fuel racism an[d] aggressive behavior. So for all the newspapers that don't understand why people are racist in this day and age all I have to say is have a second thought about fair publicity an[d] give all players an equal chance."

There have been several incidents of racists abuse in English football this season with Lord Ouseley, founder of the anti-discrimination body Kick It Out, saying earlier this year that English football's way of tackling racism was "dysfunctional."

In a Twitter post after the England match, Kick It Out said: "As we've argued countless times, it's time for @UEFA to take strong, decisive action -- fines won't do. Extended stadium bans or tournament expulsion are what's needed."

In the past UEFA has been criticized for a lack of strong punishments for football associations whose fans have chanted racist abuse.

In May 2018, the Russian Football Association was fined $29,000 for racist chanting whilst Turkish club Besitkas was fined $39,400 for a pitch invasion after a cat made it onto the playing surface during a Champions League game in the same season.

The Montenegro Football Association has said it will not comment on the allegations made by the English FA but will, instead, wait for the outcome of UEFA's investigation.

In a statement, Montenegro's FA did say that if the investigation concluded that there had been racists incidents at the match "all necessary measures" would be made to identify and then ban the responsible individuals from all football matches organized by the association.

The statement continued that Montenegro's FA had always been a "committed partner to international football organizations in combating all forms of discrimination on and off the pitch."

"At the matches played by our respective national teams until now, we have not had any incidents related to religious, gender or racial discrimination and we are fully convinced that there will not be any such incidents in the future," the statement read.

"In a multicultural and multiethnical society as Montenegro is, there is not any space for such conduct."