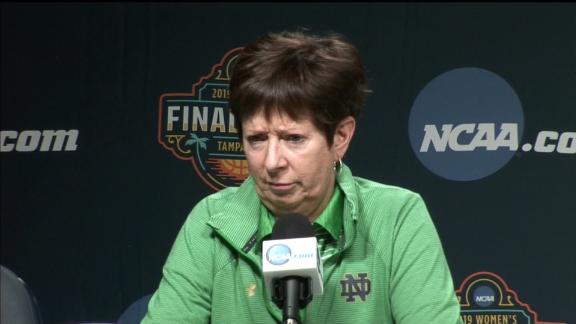 Muffet McGraw is in her ninth Final Four as Notre Dame's head women's basketball coach. She has won two national championships, including a thriller last season. On Thursday in Tampa, she spoke about much more than basketball, talking at length about women's issues.

"Girls are socialized to know when they come out, gender rules are already set. Men run the world. Men have the power. Men make the decisions. It's always the man that is the stronger one."

McGraw, in her 32nd season as head coach of the Fighting Irish, was later asked why she was coming forward and speaking up so strongly now.

"Enough," she replied. "I think women across the country in the last few years have just said enough. Time's up. Time's up. It is our turn. If it's going to happen, we have to do something about it. You see women marching in record numbers across the country. Women are coming out and being more active politically.

"I've never watched CNN as much in the past two years as I am now. We have the Equal Pay Act. Women are making 77 cents on the dollar. That's just white women. Women of color are lagging way further behind. I'm not talking about white women being coaches. We need more diversity in our game, as well."

A No. 1 seed, Notre Dame (34-3) faces a familiar foe in the national semifinal on Friday. The Irish will take on the No. 2 seed Connecticut Huskies (35-2), who are back in the Final Four for a record 12th consecutive time. It will be the 50th meeting between the storied programs.

The Irish are 4-3 against the Huskies in the NCAA tournament, including a 4-1 record against them in the Final Four. In the last 11 years, Notre Dame has defeated UConn eight times, while all other Division I teams have combined for eight wins. UConn has the most titles in Division I women's basketball with 11.