The Stephen Miller purge of DHS 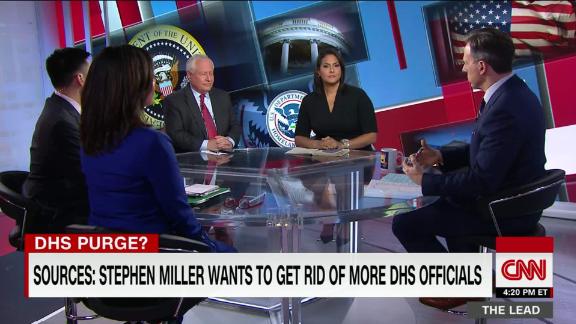 In a move better befitting an episode of "Game of Thrones" than the management of our government, White House senior adviser Stephen Miller is reportedly ushering a "wholesale decapitation" of the Department of Homeland Security's leadership.

This week started with the ouster of Department of Homeland Security Secretary Kirstjen Nielsen. Her having presided over the Trump administration's too-sinister-to-be-true practice of deterring people from coming to the country by separating them from their toddlers clearly was not enough for President Trump and Miller. Her sacking also comes days after the withdrawal of the nominee to lead Immigration and Customs Enforcement, citing a need to go in a "tougher direction." More firings are on the way.

Their fate is an object lesson in why we need to get immigration out of DHS and reset how we think and talk about immigration policy in America.

Ironically, despite the DHS' role in immigration policy, the agency's mandate goes far beyond immigration. Before using even the word "immigration," Nielsen's resignation letter references "enemies and adversaries," "cyberspace" and "emerging threats from new technologies." (This is striking, given that even a quick glance at the DHS website could lead most people to wonder whether DHS actually does anything other than immigration.)

All this highlights the enormous problems with how the United States government approaches immigration. By housing most of the agencies that deal with immigration in DHS, the US government wrongly suggests that immigration is exclusively a function of securing the homeland, of keeping the public safe. The President has capitalized on this, spending a tremendous amount of political energy on making immigration about crime and threat. Regardless of the merits of Trump's approach, we have a huge problem with how we approach immigration.

For starters, there is no reason that immigration as a government function could not be reconceived and housed in a new standalone Cabinet department. Quick civics lesson: The Constitution lays out very few exclusive powers to the federal government. A number of the jobs it identifies -- "to raise and support Armies" and "to regulate Commerce" to name two -- are, at least today, overseen by Cabinet secretaries who report directly to the President. None of this is required; in setting up the Departments of Defense and Commerce, Congress made policy choices reflecting how important each of these issues is to our success or failure as a country.

Congress could do the same when it comes to immigration. Right now, DHS is a behemoth that is impossible for any one person to manage effectively. It was formed in a rush to reform government after 9/11 and resulted in the merger of 22 agencies (among them ICE, which I helped lead for more than four years in the Obama administration) -- overseen by over 100 congressional committees -- that had little to do with each other beyond sharing a loose nexus to public safety. As a result, the secretary of Homeland Security is now responsible for overseeing everything from airport screening to helping Americans recover from tornadoes.

This structure benefits nobody. For starters, today, what would happen in the event of another major natural disaster or -- heaven forbid -- major terror attack? The leadership of DHS would certainly have to shift its energy and resources away from addressing immigration crises that aren't going anywhere any time soon. Even under the best of circumstances, nobody should be in the position of having to manage one entity with such a diffuse mandate. Moreover, putting so much on the DHS head's plate only leaves more room for immigration hardliners like Miller to swoop in, dictate our immigration policy, and force us deeper into believing that immigrants represent as grave a threat to the United States as cyberattackers do.

Ironically, even the President seems to recognize that we need to reconceive how we approach immigration. His latest solution -- creating a position of "border czar" to coordinate government efforts -- necessarily implies that our immigration system could use more tailored leadership. Of course, his proposal is more likely to score him political points than actually fix anything; he has proposed two immigration hard-liners who would further entrench the notion that immigrants make us less safe. But something needs to change.

Based on how the system is set up, Nielsen could never have succeeded. She served a President who benefits from instability. Any number of his major actions on immigration -- declaring a national emergency based on border security; threatening to close the border to all traffic from the south; manufacturing support for a border wall we largely don't need -- all fuel a political narrative that we ought to be scared, and that the President can live true to his campaign promise that "[he] alone can fix it." No DHS secretary, short of one committed to ending all immigrant border crossings, would ever have satisfied the President. I'm certain that incoming acting DHS Secretary Kevin McAleenan, a former colleague of whom I am fond, will not either.

When the structure of our government treats immigrants as a threat, government personnel are going to keep being fired for failing to stop all immigration. And immigrants will continue to be vilified.

It can't happen overnight, but it is time for a major reset. Congress has the power to hold hearings and restructure the system. That process should take into account every aspect of immigration -- its impacts on all labor sectors, on foreign relations, and on our identity as a welcoming nation just to name a few -- and not just on how much immigrants should frighten us.

No tsunami threat at Oregon Coast after New Zealand earthquake