Boxing 'shooting itself in the foot', says Dana White 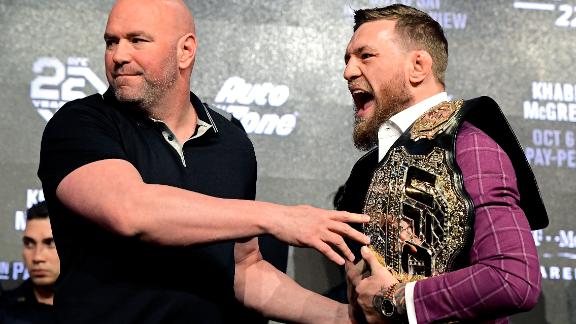 Dana White is a man of many passions.

From a love of grocery shopping and Tom Brady, to his hope of a thawing in relations between Conor McGregor and Khabib Nurmagomedov, the president of the Ultimate Fighting Championship (UFC) was an open book as he spoke to CNN's Patrick Snell.

But White was at his most revealing as he discussed boxing's heavyweight division -- an arena resplendent with talent and fronted by a trio of superstars in Anthony Joshua, Deontay Wilder and Tyson Fury.

White has never been quiet about his interest in the sport; of course, he played a major part in facilitating McGregor's one-off bout with Floyd Mayweather in 2017, while he has been linked with an expansion of his promotional portfolio into the ring.

Yet, boxing, he says, is "shooting itself in the foot." Speaking before the news that Jarrell Miller returned adverse results to a drugs test, White points to Joshua's lack of superstar status in the US as evidence of the sport's strategic flaws.

Could he be the man to change this? White suggests all will become clear come the end of summer.

Oregonians to receive more than $200M in COVID-19 relief

Moving of American flag was not a protest, Cottage Grove business says

OSP investigating string of shootings on I-5

Fire crews successfully put out fire on I-5