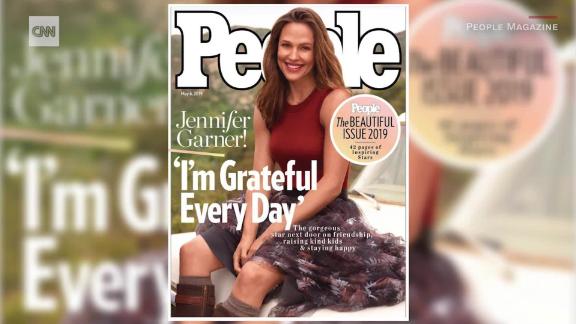 Jennifer Garner's response to being selected as the cover person for People magazine's Beautiful issue was so typically Jennifer Garner.

"This is so embarrassing, I mean seriously," the actress said after her selection was announced Tuesday on "The Ellen DeGeneres Show."

The "Love, Simon" actress said it was her first time seeing the cover, which features her dressed in a sleeveless top, skirt and boots while sitting on the hood of a car.

"I can't look at it," the 47-year-old said, shielding her eyes. "People is now a magazine for AARP."

Garner said she had to keep the news from everyone, including her family.

DeGeneres joked that she believed the magazine got the idea to select Garner after seeing the selfie the pair did on an earlier episode of her talk show.

Garner said it was flattering, but she didn't seem super comfortable with the honor.

"I have never been more nervous than I am today," she said. "I don't know, I guess I just thought you guys would boo."