Pita Taufatofua, known as the shirtless Tongan, is aiming for his 3rd Olympics in 2020 -- this time in 2 sports 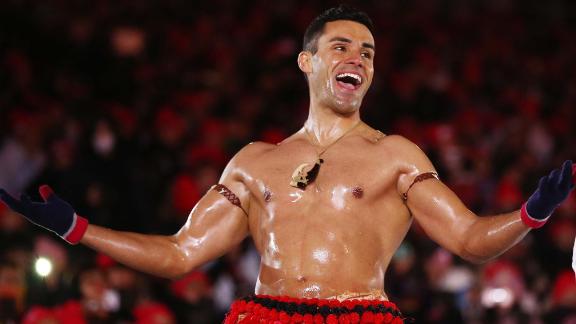 Pita Taufatofua, is aiming to qualify for the 2020 Summer Games in Tokyo in a new sport, as he told CNN World Sport's Amanda Davies

Pita Taufatofua, the Tongan man who gained immediate fame when he went shirtless during the Parade of Nations in the past two Olympics, is aiming to qualify for the 2020 Summer Games in Tokyo.

And he hopes to make history twice in this attempt alone.

In addition to trying to make a second appearance in taekwondo, Taufatofua, 35, is attempting to also qualify in sprint kayak, which he says he took up about three months ago.

"The aim in 2020 is to be the first person in the modern era to compete in three unrelated Olympic sports, and to do two sports in one Olympics in taekwondo and kayaking," Taufatofua said in an interview with CNN's Amanda Davies.

Taufatofua represented Tonga in taekwondo at the 2016 Summer Olympics in Rio de Janeiro and in cross-country skiing at the PyeongChang Winter Olympics in 2018.

What made him go viral, though, were the images of him at the 2016 opening ceremony, shirtless, oiled up and wearing a traditional Tongan mat around his waist while waving his country's flag. In South Korea, braving the cold, Taufatofua did it again.

Taufatofua said he added kayaking to his training as a nod to his ancestors, as well as attention for the planet.

"I want to bring awareness to the oceans, to our planet and make people see that what's happening to our planet is something that we all need to be aware of," Taufatofua said. "I just love being out on the ocean, being out at sea. It's a sport that excites me. I haven't learned it yet, but it excites me at the same time."

Taufatofua is learning that the kayak is quite challenging. Is he any good at it?

"I'll tell you once the kayak stops falling over, because it keeps spinning," Taufatofua said. "But once I get to that point where it's balancing well, then hopefully I'll be faster than those other guys."

Taufatofua has surprised before, however, when he qualified for the 2018 Winter Games in cross-country skiing with only about three months' experience on snow.

"A medal isn't realistic, but that's why it excites me," Taufatofua said. "None of this has been realistic. There was no way we were going to qualify in a year in cross-country skiing, but the impossible dream is what drives us."