Claressa Shields: Boxing champion on Flint, food, and being the 'greatest woman' 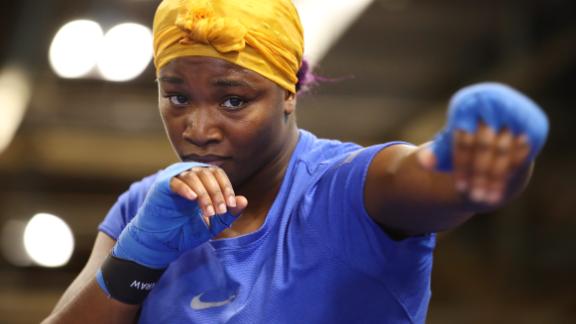 Claressa Shields, recently crowned the undisputed middleweight world champion, reflects on her rise to the top and how she aims to inspire other women

She is just 24, but Claressa Shields isn't afraid to describe herself as the "greatest woman of all time."

Bold perhaps, but there's plenty of supporting evidence behind the braggadocio of Shields, whose nickname is "T-Rex."

Shields is only the second woman after Cecilia Brækhus to hold the IBF, WBA, WBC, and WBO belts in a single weight category, and just the sixth person ever. None, however, did it as quickly as Shields, who reached the pinnacle of her sport in just nine fights.

"There's not a woman in this world that can beat me if we put on a pair of gloves and we fight. I've accomplished so much," Shields, who also won gold at the 2012 and 2016 Olympic Games, tells CNN.

"I'm just the undisputed champion -- I am great as I think I am and I've been able to prove it by taking on these big challenges and beating these girls who they say cannot be beaten."

Of her nine professional victories, Shields has won two by knockout and the rest by unanimous decision. In defeating Hammer, she conquered her toughest opponent to date, an undefeated fighter with 11 knockouts to her name.

READ: Dana White on why boxing is 'shooting itself in the foot'

'Make your own life'

To achieve her current status, Shields has had to overcome formidable hardship. She grew up in Flint, Michigan, a city beset by economic troubles that became the subject of international headlines following the water crisis of 2012.

She has opened up about the sexual abuse she suffered from the age of five, and how it was through her father, himself an amateur boxer, that she was inspired to take up the sport as a young girl.

For many of the people in Flint, Shields is a symbol of hope.

"[I want] to let those know who are going through the same thing or something similar, that you don't let the abuser, or you don't let the people who hurt you, win. You just continue to be great and you make your own life.

Shields has never shied away from speaking her mind, and vows, inside and outside the ring, to keep fighting for what she believes in.

It's an attitude she says she's inherited from boxing great Muhammad Ali, who was famously suspended for three years after protesting against the Vietnam war. Shields, meanwhile, wants to use her voice to promote women's boxing, which only gained Olympic status in 2012.

"I love boxing, I love fighting, I love hurting people inside the ring. That's what I love to do and when I first started boxing, they were saying that women can't talk like that," she says.

"I believe that women should have equal rights, equal pay, equal promotion and that we should be treated fairly.

"I'm a lot more outspoken than all the other women in boxing and I just try to back up my word with my action and then hopefully move the sport forward and just get us to where tennis is. With women's tennis and men's tennis it's kind of equal, so I want to get back into the same place."

Diet of a champion

Shields admits that doubts arise ahead of big fights, but has faith her rigorous training regime will come good in the end.

"Whatever is the worst thing that can happen, I think about it and I just do everything in my power to not make it happen," says Shields.

That involves training for two to three hours twice a day, living off a strict diet that includes boiled eggs, grilled meat and fish, brown nice, heaps of vegetables, and a daily gallon of water.

Sundays, however, are for rest.

"Sunday is my cheat day," Shields explains. "I have a cheat day every week in camp at least once ... I don't care if I have some Doritos, if it's a donut, if it was a cream cheese filled pretzel. I have my cheat days, but for my [main] diet it's very, very strict."

Then there's also her secret weapon: "The spinach and watermelon drink is just good," adds Shields.

"People think oh spinach is nasty and watermelon is nasty. No, you put them together, you put little water in there, you mix it up, you let the blender do its thing. It gives you a lot of energy and it helps clean yourself out."

This recipe, you expect, will be fueling plenty more success in the future.