Beto O'Rourke made things personal in his CNN town hall 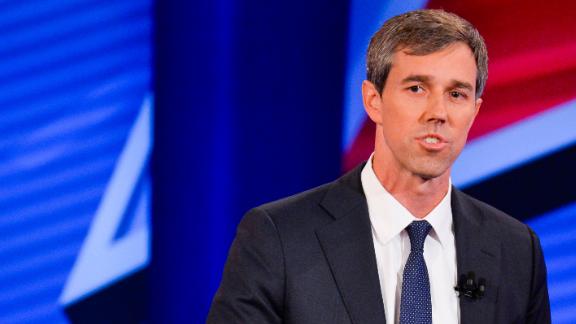 Beto O'Rourke showcased the natural charisma that helped make him a national figure during a losing Senate campaign in Texas last year during his CNN Town Hall Tuesday night.

After his campaign stumbled out of the gate with a Vanity Fair interview that found critics, and even potential supporters, accusing him of basking in unearned racial and class privilege, O'Rourke swung for the rhetorical fences in his town hall in Des Moines, Iowa.

The theme of his message was two-fold: investment and engagement.

O'Rourke touted investments in everything from health care and crumbling infrastructure to legal and legislative protections for American workers, immigrants, college students and underdogs of all stripes.

His investment ideas were not purely budgetary but took the form of progressive policy proposals that would invest our national efforts in goals like winning the trade war with China and revamping health care in a realistic way that builds upon the system we already have in place.

He spoke movingly about investing effort in a solution to the national plague of gun violence, vowing to ensure that "weapons of war" designed for conflict zones would no longer be sold domestically. O'Rourke notably stopped short of supporting fellow Democratic candidate and New Jersey Sen. Cory Booker's plan for mandatory federal licensing of every gun owner in America.

But woven through every policy idea he put forth was the notion that we must engage with our fellow Americans to create solutions that acknowledge the humanity of all.

O'Rourke urged that we view victims of the opioid crisis and African Americans who are incarcerated as part of the same extended kinship network. "Let's end the war on drugs," said O'Rourke, including expunging the arrest records of those caught smoking marijuana.

He pushed for making sure we are mindful of the consequences of slavery and Jim Crow that have shaped the American criminal justice system as we repair longstanding racial wounds.

On health care, O'Rourke detailed his "Medicare for America" plan as a system that would allow every American to get access to high-quality care. And he took the idea of engagement to the next level by speaking directly with members of the audience about their health care struggles and applauding their bravery in sharing their stories.

When questions turned to family separation, O'Rourke took a firm stance, arguing that no family should ever be separated again and no one seeking asylum should be sent back to a country where they would face a terrible fate. "I would never again separate another family when they come here at their most vulnerable and desperate moment," O'Rourke said to a round of applause. On this issue, he advocated citizenship for the Dreamers and a more expansive and open visa process.

Perhaps his best answer came to a question about the racial division that has swelled nationally since the 2016 presidential election. O'Rourke spoke of the hatred and violence against immigrants, Muslims and people of color, and the problematic political rhetoric of President Trump, harkening back to when Trump said that there were "very fine people on both sides" of the events that took place in Charlottesville.

O'Rourke drew a clear line between himself and the President and made certain there were no doubts about which side each stood on. His passion for the issue seemed clearly sincere.

Near the end of the town hall, O'Rourke made a generational appeal. Utilizing his youth and ability to relate to millennials and Generation Z Americans, O'Rourke spoke about feeling optimistic about the future of the nation because of the young people who have helped energize his campaign in Texas and nationally. He clearly understands that to win the party nomination, he must appeal to the new voters who cast ballots with their futures in mind.

In a seemingly enormous Democratic field, O'Rourke initially distinguished himself through an underdog Senate campaign against Ted Cruz that raised record sums of money and got him within three points of pulling off a stunning upset. He galvanized enough first-time voters for Democrats to make surprising inroads in Houston and other local races statewide.

O'Rourke launched his presidential bid after a well-publicized month on the road, where he livestreamed dental cleanings and haircuts in a way that might have been considered folksy, but often was interpreted as quintessential Generation X narcissism. Some of the damage has been self-inflicted, including the Vanity Fair interview where he characterized himself as being "born to be in it," and made joking comments about his wife doing most of the child care.

Nonetheless, Beto emulates some of the spirit that Barack Obama showed championing the fight for "hope and change." He speaks eloquently about pragmatic policies that would help close the rising inequality gap between the haves and have-nots threatening to tear apart the very fabric of American democracy.

Now, O'Rourke's daunting challenge is convincing Americans to take another chance on a charismatic but untested young presidential candidate in a moment of national uncertainty and soul searching. But his personal approach may be just convincing enough to do so.

Hiker rescued after falling from cliff on the Oregon Coast