Nico Rosberg: 'When Mercedes come, they come to win' 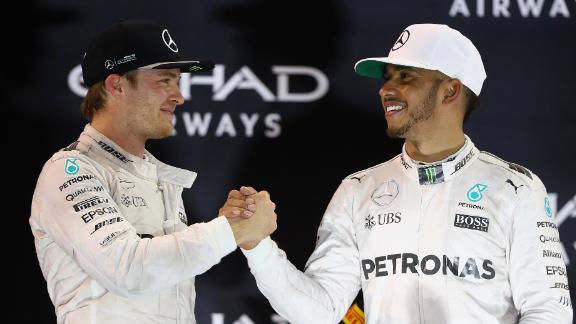 Mercedes will join Formula E from next season -- and they're coming to win.

Nico Rosberg's current life is a world away from the career he enjoyed as a Formula One world champion, piloting gas-guzzling race cars to victory at circuits around the world.

The German has transformed not only his professional lifestyle but his personal one, too, promoting a sustainable future with the help of his latest venture.

In Berlin, the site of this weekend's E-Prix, Rosberg has returned with his Greentech Festival, a platform for green companies from around the world to showcase the renewable technology of the future.

Since its inception five years ago, Formula E has been at the forefront of promoting the possibilities of green travel in a fun and exciting way.

Some of the world's most prestigious manufacturers have already joined the rapidly-growing series, with one more big name set to be thrown into an already thrilling mix from next season in the shape of Mercedes.

"It's so awesome what is happening in Formula E and all these manufacturers coming in," Rosberg told CNN in Berlin. "From a German perspective, Mercedes against BMW against Audi against Porsche.

"Wow, that will be thrilling -- and when Mercedes come, they come to win. Second is not good enough for them. They are already racing at the moment, just under a different name (HWA) and you can see it's not an easy one, so they will need some time as well.

"The other manufacturers have had a head start so will be interesting to see how quickly they get up to speed."

Under affiliate HWA Team, Mercedes has been testing the water in Formula E ahead of the team's launch next season.

It's been a difficult start to life in the all-electric racing series, with drivers Stoffel Vandoorne and Gary Paffett languishing in 15th and 18th place, respectively, in the championship.

HWA finds itself in ninth place with 28 points in the team standings, propped up by the Geox and Nio teams.

Mercedes wants to avoid the ignominy of finishing in last place in its first season in a championship which technically and financially it will not be able to dominate like it has in Formula One.

The German manufacturer is building a true F1 dynasty having been triumphant in the previous five seasons. It is already in pole position to win six championships in a row and will not want to tarnish the reputation of excellence it has cultivated by performing poorly in Formula E.

Mercedes F1 team principle Toto Wolff, who Rosberg had a close relationship with in his time in F1, will play an active role in selecting the two drivers to represent the team in its debut season.

But Rosberg says a return to racing in Formula E, either as a driver in another capacity, is not something that is currently on his mind.

"No, that's not really something that I'm going for at the moment," he admitted. "If I were a team principal, it would require the same dedication that I had to give as a driver and I am not ready for that level of commitment again -- every day traveling the world.

"I am quite happy with the freedom the way it is now in my life."

Number of structures lost in Holiday Farm Fire up to 723