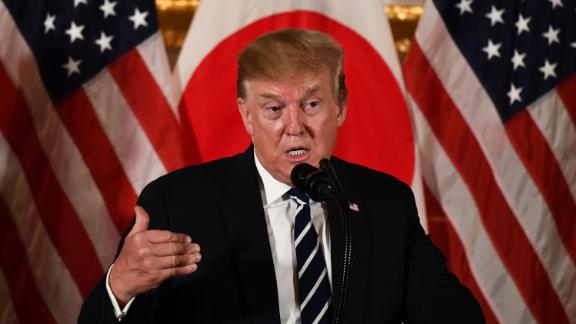 Amid heightened tensions at home, President Donald Trump arrived Saturday in Japan seemingly in need of a vacation from the battles he has chosen to fight with Democrats, the intelligence community and just about everyone else who hasn't agreed to do his bidding.

While his time in Japan promises to be filled with fun and games, it's also an opportunity to make real progress on some key national security issues. Bromancing a US ally such as Japan is important, but the President's perceived dislike for any preparatory work -- and his desire to focus more on feting himself than on difficult policy discussions -- means that his four days in Japan may largely be a waste of Air Force One jet fuel.

Instead of berating domestic enemies from abroad, or simply enjoying the pageantry in store, Trump should make the most of his time with Japanese Prime Minister Shinzo Abe and focus on trade, North Korea and other security issues.

While Abe understands that Trump's got a soft spot for being treated like a king, there are complex issues for the two leaders to work through. As national security adviser John Bolton stated publicly from Japan, North Korea's short-range missile tests earlier this month violate UN Security Council resolutions -- and threaten the region. Kim Jong Un is likely to respond to these latest statements -- and continued US sanctions -- by ratcheting up tensions. Trump should prioritize a coordinated response with Abe if there's time this weekend to squeeze a policy talk in between golf and a sumo wrestling tournament.

South Korea -- another US ally -- has been drinking some of the "Kim Kool-Aid" and trying to convince Trump to stay engaged in diplomacy with North Korea's leader despite a lack of progress on denuclearization and Kim's increasingly menacing behavior since the Hanoi summit collapsed.

Abe, on the other hand, has been consistently focused on ensuring that Trump doesn't go soft on North Korea. Japan is in striking range of Kim's rockets (as are the tens of thousands of American service members and their families stationed in Japan), some of which have flown over Japan before and landed in Japanese territorial waters.

While the Trump administration was reluctant to punish Kim for his recent missile launches, Abe took a hard line and said the tests violated UN resolutions long before Bolton publicly agreed.

Kim is a menace in Abe's neighborhood, and the Japanese Prime Minister will be looking for reassurance from Trump that the United States won't sacrifice its alliance with Japan to maintain ties to North Korea. After all, Trump's relationship with Kim has been a short-lived affair, while our close ties to Japan have stretched back 70 years.

Friends can have disagreements, and Japan and the United States do disagree on Iran. Japan was against the US withdrawal from the Iran nuclear deal, and Japan and Iran have maintained good relations. Abe recently welcomed Iranian Foreign Minister Javad Zarif and may visit Iran this summer.

Japan has halted imports of Iranian oil due to US sanctions, but because of its historically close ties to both Iran and the United States, Abe could try to mediate tensions between the two. Four days is ample time for the President to share sensitive intelligence with Abe regarding the reasoning behind his decisions to deploy more US military assets to the Middle East and the State Department's decision to withdraw personnel from Iraq. If the President decides to consider actual diplomacy with Iran -- which doesn't happen by tweet -- Abe could share some key messages with the Iranians. But that would require Trump briefing him, in full, on his intentions, including whether he's actually willing to talk.

Abe's also probably wary of Trump asking him to foot more of the bill for US forces stationed in Japan. Trump has bullied South Korea regarding its financial contribution to US forces stationed there (and we all know how Trump has criticized our NATO allies for their contributions to that alliance). Abe is likely worried that Trump will publicly call for more of a financial commitment from Japan as well despite the fact it is in the US interest for American forces to be stationed there.

As evidenced by the recent military drill we did with Australia, South Korea and Japan, threats in Asia-Pacific are rising -- especially from China and North Korea.

During Abe's visit last month to the United States, the White House said that both sides remain committed to working on a bilateral trade agreement. On Saturday, Trump said that he's optimistic about a trade deal.

Trump has been on a trade tear since taking office -- including when he withdrew from the Trans-Pacific Partnership, which includes Japan -- and this time around, he needs a win more than ever. With the US-China trade war hanging over his head and bad economic news associated with the tariffs he has imposed, Trump is likely more open to doing what it takes to clinching a deal with Japan because he's come up empty on all other fronts.

If Abe is going to go out on a limb and sign a bilateral pact with Trump, he's probably expecting a tariff truce for the foreseeable future. Abe has his own politics to worry about -- the Japanese auto lobby, among other constituencies, is dismayed by Trump's tariffs.

The Prime Minister is focused on winning Trump's approval, probably because he thinks it could mean better security for Japan and some kind of immunity from Trump's tariffs. Doing so will require consistent obsequiousness -- which Abe seems willing to adopt as long as the rewards outweigh the political risks of being Trump's No. 1 fan.

Abe has already invested a lot of time and effort in his relationship with the US President. In total, Abe has visited and spoken with Trump more than 40 times.

It's clear that Abe understands that keeping Trump happy means a lot of face time, flattery (Trump claims Abe nominated him for a Nobel Prize) and gold-plated gifts.

While Abe is pulling out all the stops for Trump, he is also aware that the President faces several domestic battles. With Trump holding progress on key issues such as infrastructure hostage in a long-standing showdown with Democrats over oversight investigations, Abe knows that Trump will be distracted by issues at home. Abe is likely nervous that the focus of this visit will be overshadowed by Trump's domestic fights rather than the mutual challenges that the United States and Japan are supposed to confront together.

Abe is on comfortable footing at home for now, but he's probably looking for a return on his investment in Trump when it comes to a stronger security alliance and some guarantees on tariffs. Only 30% of Japanese express faith in Trump -- the third-lowest confidence in an American leader in 13 years.

With snap elections potentially on Abe's agenda, a Trump tirade in Japan could hurt the Prime Minister domestically. Abe has likely set a low bar for Trump's visit -- his ultimate aim is to keep him happy so that Trump doesn't sell him out in favor of Kim or hit him with politically motivated tariffs.

Trump's visit to Japan couldn't come at a more crucial time. The stakes are high.

His talks with North Korea have stalled, and trade negotiations with China collapsed. This is a prime opportunity for the President to advance a proactive policy agenda with Japan. But without extensive preparation, Trump is more likely to use his time on the trip lapping up the hospitality and celebrating himself.