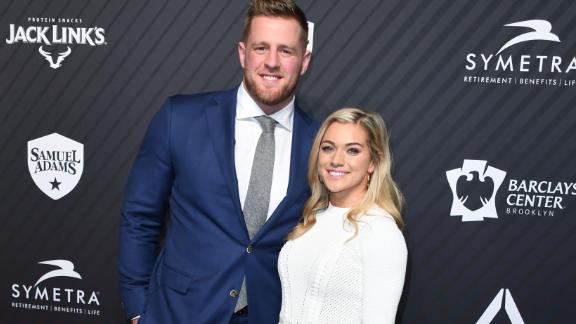 The couple, from their respective accounts, tweeted pictures of Watt proposing to Ohai.

"I'm the luckiest man in the world. #SheSaidYes," Watt tweeted.

"I love you @JJWatt," Ohai tweeted.

Ohai was the No. 2 overall pick in the 2014 National Women's Soccer League College Draft, according to her profile on the Dash's website. Prior to the draft, the Draper, Utah, native played at the University of North Carolina at Chapel Hill. Her profile on the school's 2013 roster says she was a journalism and mass communications major.

Watt has been playing in the NFL since 2011 and has played his entire career with the Texans.

Watt is also known for his philanthropy. After Hurricane Harvey devastated areas around Houston and the Gulf Coast in August 2017, Watt raised more than $37 million for victims of the floods and damage the storm left behind.

He was awarded the 2017 Walter Payton NFL Man of the Year Award for his efforts. The award honors a player's charity and volunteer work.