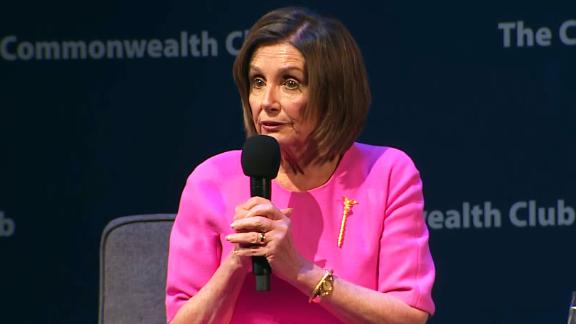 House Speaker Nancy Pelosi shared her thoughts on special counsel Robert Mueller's comments after a two-year-long silence, saying "nothing is off the table" for Congress as they pursue justice and accountability for the country.

If you follow Robert Mueller's words, offered in a surprise speech to the Justice Department press corps Wednesday, they lead to one conclusion: House Speaker Nancy Pelosi has no choice but to begin the process of impeaching President Donald Trump.

The basis for impeachment can be found in Volume 2 of the special counsel's report, which outlined 11 ways in which investigators probed whether Trump hindered Mueller's work and intentionally obstructed justice.

With his brief address, Mueller drew attention to these findings and to the fact that he could do nothing about them as he said "... if we had had confidence that the President clearly did not commit a crime, we would have said so."

That Trump wasn't indicted was a matter not of the evidence but of Department of Justice policy, which prohibits prosecuting a president. "Charging the president with a crime was, therefore, not an option we could consider," explained Mueller.

Answering questions hours after Mueller spoke, Pelosi said "nothing is off the table" but reiterated that for now the House would continue to "investigate" and "litigate" in pursuit of the truth.

House Judiciary Committee Chairman Jerry Nadler also stopped short of saying impeachment was imminent but said, "given that Special Counsel Mueller was unable to pursue criminal charges against the President, it falls to Congress to respond to the crimes, lies and other wrongdoing of President Trump -- and we will do so."

Although Mueller believed he was barred from indicting Trump, he said his office was aware that it should act while witnesses and documents were still available, and because it was possible that others would be charged. He said that where Trump was concerned, ultimately, "the Constitution requires a process other than the criminal justice system to formally accuse a sitting president of wrongdoing."

The process -- impeachment -- would likely begin with committees of Congress investigating the election, Russia's attacks, and Trump's apparent efforts at cover-up and obstruction. Much of this activity involved Trump's allegedly coercive interactions with then-FBI director James Comey.

Early in his tenure, Trump asked Comey to go easy on then-national security adviser Michael Flynn, who was being investigated for lying about his contacts with Russians. ("I hope you can let this go," was what Trump said, according to Comey) Later, when he fired Comey, Trump publicly confessed he did it because of the FBI's investigation into the Russian election interference.

If Trump's behavior with Comey isn't enough to persuade members of Congress that impeachment must be on the table, then they need only read Robert Mueller's report and pay close attention to Volume Two. There, as Congressman Justin Amash has noted, they'll see a "consistent effort by the president to use his office to obstruct or otherwise corruptly impede the Russian election interference investigation because it put his interests at risk."

The incidents from the report referenced by Amash, who, like Trump, is a Republican, include the President allegedly pressuring his former White House counsel, Don McGahn, to lie about Trump's demand that McGahn act to remove Mueller.

Whether they would be considered "high crimes and misdemeanors" of the kind that could lead to impeachment, they likely offend anyone with a serious view of the President's duties as a public servant and defender or America's democratic ideals.

That Mueller is offended by the facts uncovered by his investigation and the President's behavior came through loud and clear in his report and in his surprise appearance before the press.

For years, the President has conducted an escalating campaign of character assassination against Mueller's team, the FBI and the larger intelligence community.

A man of few public words, Mueller devoted some of them Wednesday to defending these very same people. "I want to thank the attorneys, the FBI agents, and analysts, the professional staff who helped us conduct this investigation in a fair and independent manner," he said. "These individuals who spent nearly two years with the special counsel's office were of the highest integrity."

Not a word generally attached to Donald Trump, "integrity" has been a byword for Mueller throughout his career. With his work as special counsel complete, the question of integrity must now be focused on the House of Representatives, which can restore the dignity of the presidency by taking up the work Mueller suggests.

With his report, and his speech, he called them to their duty and offered them direction on how to fulfill it.

Traffic was at a standstill on Franklin Boulevard on Thursday