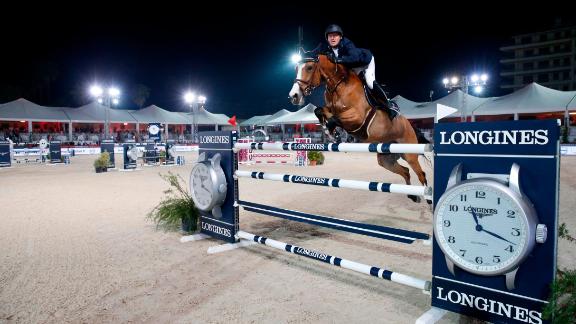 Bruynseels and his mare Gancia de Muze won a nine-horse jump-off with a clear round in a time of 34.69 seconds on the French Riviera to clinch the latest leg of prestigious series for the world's top show jumpers. Britain's Brash was second at 0.97 seconds back, while overall leader Daniel Deusser of Germany finished third, at 1.28 seconds back.

"I have to thank my horse, because she was in great form, not only this weekend. It is one of the best horses I have had in my life."

READ: Danielle Goldstein on the secrets of her success

His first victory on the world's richest showjumping circuit earned Bruynseels a spot in the season-ending GC Prague Playoffs from November 21-24, which will see all individual LGCT winners compete against each other in the season finale.

"To get something like this in your career, is something great," said Bruynseels, the son of a horse trader.

After Shane Breen and Ipswich van de Wolfsakker had set the pace as the second pair to go in the jump-off with a clear round in 38.10 seconds, Deusser and Calisto Blue obliterated the Irishman's time by 2.13 seconds to take the lead with a high-octane round in 35.97 seconds.

Although rider No. 8, Pieter Devos of Belgium and Espoir had a clear round, the pair were almost 1.5 seconds slower than Deusser, and eventually finished in fourth place.

The crowd cheered when the only Frenchman in the jump-off, Olivier Perreau, entered the ring with Venizia d'Aiguilly, only for home hopes to be dashed when the horse struck a pole coming into the double at the halfway point.

With two more riders to go, Bruynseels and his athletic mare went full throttle, charging at the last vertical to take the lead by 1.28 seconds.

"I knew I had to take some risks, I saw the round of Daniel and I knew he was very fast," Bruynseels said. "Luckily, I had some helpers...and they told me I should take some risks, and I did."

Could Brash, a gold medal winner at the 2012 London Games, ruin the party for Bruynseels?

Riding the big-striding Hello Mr President, Brash was unable to catch the Belgian pair, as he finished in a time of 35.66 seconds.

"I have a superfast horse, and when I can do the same lines as the others, I know she is just faster," Bruynseels said.

READ: Jessica Springsteen on the secrets of her success

It was a family affair in the Global Champions League for teams, with the father-and-son combination of Eric and Maikel van der Vleuten of the Netherlands clinching the Cannes trophy for Madrid in Motion as they made no mistakes in two rounds each over two days.

"On Thursday the horses felt very good, and the horse from my father jumped two amazing rounds," Maikel van der Vleuten told the GCL website. "It's an honor to win here the League competition. My father has always been my trainer and it's good he can compete still, so we're very happy with our win today."

Dutch veteran Eric van der Vleuten, 56, thanked team owner Marta Ortega. "It's with thanks to Marta that we are able to do this together in our family, so it's a nice win. It's a combination of both of us - we're good together, it's amazing to win this competition at this level."

The Swans remain the overall GCL leaders with 145 points, followed by Miami Celtics with 137 points and St Tropez Pirates with 136 points.

The next event on the 20-stop Global Champions Tour is in Stockholm, Sweden on June 15.