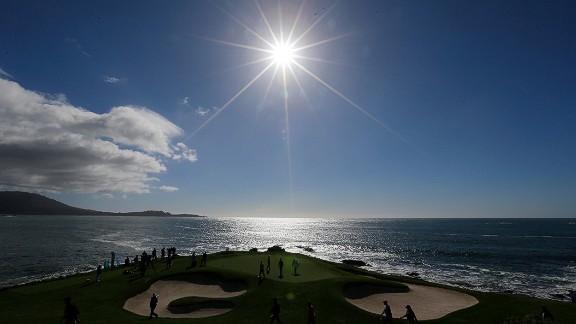 The 119th U.S Open tees off at one of the most iconic courses anywhere in the world. Players say "it's more beautiful in person than I could've imagined."

Tiger Woods returns to the scene of arguably his greatest victory this week, intent on proving that his recent Masters win was the beginning of a major renaissance.

Woods won the US Open by a record 15 shots at Pebble Beach in 2000, described Tuesday by this year's defending champion Brooks Koepka as "probably the greatest golf performance we're going to see."

It sparked an unprecedented stretch of four straight major victories for Woods -- dubbed the "Tiger Slam" -- and he is back in his national championship on California's Monterey Peninsula as a resurgent 15-time major champion following that remarkable Augusta triumph, his first major title in 11 years.

But his missed cut at the ensuing PGA Championship at Bethpage left questions marks over which is the new normal -- Woods back as a major force after career-saving spinal fusion surgery? Or Woods the bit-part player with a penchant for Augusta?

The 43-year-old told reporters at Pebble Beach Tuesday he was in "rough shape" ahead of last month's PGA without expanding on his ailments, but said he was "trending in the right direction" ahead of the US Open at a venue which holds fond memories.

"It's crazy. It's been 19 years. I still remember most of the shots I hit that week," said Woods.

He added: "There's nothing like playing a US Open setup here in Pebble Beach.

"The golf course is not overly long. It's not big in that regard, but man, it's tricky. The greens are all slanted, very small targets. And if they ever firm up, then we have a totally different ballgame."

Time on his side

Woods' Masters triumph reignited his quest to beat Jack Nicklaus' record of 18 major titles, and despite the Bethpage blip he believes time is still on his side.

"Hypothetically, let's say I give myself 10 years. That's 40 major championships. That's a lot of majors," said Woods, who finished a promising ninth in his latest outing at the Memorial Tournament earlier this month.

"The trick is now can I keep myself healthy enough and strong enough and fast enough to endure all that, considering what my body has gone through. And that's where I need help with all my trainers and physios and workout regimes, and hopefully I can make that happen."

One obstacle in Woods' way -- this week and for the foreseeable future -- is the daunting figure of world No. 1 Koepka, whose four titles in his last eight majors has drawn many comparisons with his illustrious countryman.

The 29-year-old Floridian has won the last two US Opens and is bidding to become the first player since Scotland's Willie Anderson in 1905 to win the tournament three times in a row. Only one player has won the same major three times in a row since the Masters was introduced in 1934 -- Australian Peter Thomson won the Open from 1954-1956.

Koepka admits history is not on his side, but acknowledged victory at Pebble Beach would be a unique feat in its own right.

"You look at the guys that have won here at Pebble, all Hall of Famers, some of the greatest players that have ever played the game," he said. "How can you not like the views? It's a cool place just to play golf and just to be here. It really is special."

READ: Woods' Masters win has Nicklaus 'shaking in my boots'

The powerful Koepka has become the most dominant player in the game through a combination of physical prowess, pin-point iron play, a deft short game and impressive mental fortitude.

But he admits he is driven, in part, by a self-confessed chip on his shoulder.

"I mean, why wouldn't you? You've always got to find something to give you a little bit of extra motivation," he said Tuesday. "Sometimes it's blatantly obvious."

Koepka pointed to a US Open preview segment running on TV in the US which neglected to include him.

"There's a couple of things where it's just mind boggling how -- it's like, really? Like, how do you forget that?" he said.

He recalled a tale ahead of last year's US Open at Shinnecock Hills when he was working out in a gym and all eyes were on his close friend Dustin Johnson, even though he was the defending champion. He said it happened again in Canada last week.

"I was working out next to some guy, and he was talking about how Dustin was just in there and how cool it was," said Koepka Tuesday.

"And I was with my trainer, Barrett, and we were just kind of laughing."

The flip side is that Koepka still coming to terms with his growing fame.

"I view myself completely differently than people view me," he said. "I still think it's weird when I walk into a place and I can see eyes are on me just for dinner. And I'm like, 'What's everybody staring at?'

"I just view myself as a regular guy. I just happen to be really good at golf. I just want to be just like everybody else, just a normal person."

Despite Koepka's deadpan demeanour on the golf course, his compatriot Jordan Spieth, who has known him since amateur golf days, says he is "light and fun, and fun to be around."

"He's a guy's guy," added former world No.1 Spieth. "He's a good hang always. And he may be stoic on the golf course. I think that's his level of confidence that he has and his level of focus that he's been on."

Alongside Woods and Koepka, the narratives at Pebble Beach this week are as tangled as the kelp in Carmel Bay.

Veteran Phil Mickelson just needs the US Open to complete the career grand slam of all four major titles, but has finished runner-up a record six times in the tournament. However, the 48-year-old left hander won at Pebble Beach earlier this season for his fifth victory over the celebrated California course.

World No. 2 Johnson also has previous at Pebble, and some deep scars from past US Opens. Following two PGA Tour wins at Pebble Beach, he led by three going into the final round of the US Open in 2010, but amassed a closing 82 to finish tied eighth behind Northern Ireland's Graeme McDowell.

Johnson also three-putted from 12 feet on the final green to hand Jordan Spieth the 2015 US Open at Chambers Bay. And after his sole major win at the 2016 US Open at Oakmont, he led by four at halfway 12 months ago at Shinnecock before ending two behind Koepka.

At Bethpage last month, Johnson took the fight to long-time leader Koepka with a final-round charge before falling short at the end.

"It seems like he steps up and plays really well in big events. That's a sign of a really good player," said Johnson of his friend.

Third-ranked Rory McIlroy, who won the US Open in 2011, clinched the last of his four majors in 2014 but has hit form at just the right time with a final-round 61 to win in Canada Sunday.

Then there's Spieth, who is only the second player alongside Nicklaus to have won three legs of the career grand slam before the age of 24.

Spieth, however, has struggled since his 2017 Open Championship win but has shown glimpses of better days ahead with third at the US PGA and two other top 10s since.

"This one should provide a really cool challenge just given where it is in the setting and the history of this tournament here," he told reporters at Pebble Beach.

"We have four Super Bowls a year; this is one of them so it means a lot."