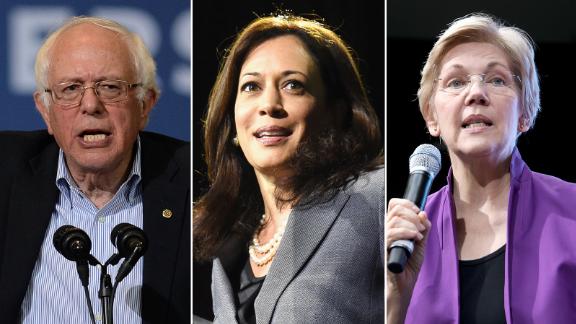 A new poll shows former Vice President Joe Biden as the frontrunner among Democrats running for president in 2020, while Sen. Bernie Sanders (D-VT) and Sen. Elizabeth Warren (D-MA) are tied for second place.

It's like Biden's been cryogenically frozen for the past few years and someone just woke him up to find his party — and the ground underneath him — has completely changed.

The latest anachronism he rolled out — at a Tuesday Manhattan fundraiser, where he lamented long-dead notions of civility and longer dead white supremacist, Southern Democrat friends — puts him once again outside the perimeters of his own party and modern politics.

Joe Biden hasn't really been in the Democratic trenches in over a decade. In the years since becoming Barack Obama's vice president, he's enjoyed an almost transcendental status, hovering over the party, rather than walking amongst it.

That 30,000-foot view allowed for some occasional prescience — for example he astutely gauged where gay rights were headed even before Obama and Hillary Clinton did.

But it also kept him insulated from the fights that were happening on the ground — fights over newfangled terms like intersectionality -- and fresh minefields like a new economic socialism, the #MeToo movement, a debate over slavery reparations, an illiberal crackdown on "triggering" speech, and a growing anti-Israel hostility.

And so, Biden is so unfamiliar with the new progressive erogenous zones that his nascent campaign has been clumsier than a teenager on a first date.

There was his retrograde defense of the 1994 crime bill, which most liberals — and even plenty of conservatives — now see as largely ineffective if not deleterious, and disproportionately targeted against people of color.

There was his flip-flop-flip on the Hyde Amendment, a restriction against federal funding of abortion that is still popular among a majority of Americans but suddenly a new progressive litmus test.

He has regularly joked on the campaign trail about his own penchant for inappropriately touching women and young girls. This is an instinct many septuagenarians who know they're not actually predators might possess, but one that is nonetheless highly incompatible with the new world order, where joking about NOT doing something can be nearly as bad as actually doing it.

Well, once again Biden has woken up to find himself in the wrong century. Riffing on civility, Biden told an audience of about 100 people Tuesday night that he is uniquely able to bring people together.

It was which people that raised eyebrows, though.

As some have noted, this is an odd thing to draw attention to, given Biden's own awkward history of opposing busing to desegregated schools while he was a senator in 1975.

It's even odder to bring it up, given that Biden is running for president as a Democrat in 2019.

"We got things done," he boasted of seemingly being able to compartmentalize the Dixiecrat racism of white supremacist legislators so as to work together in Congress.

Of course, "we got things done" is a fine musing, as is the idea of comity. But waxing nostalgic for the good old times, when racists and non-racists could work together sounds eerily close to the idea of there being "very fine people" on both sides of a white supremacist protest.

For a presidential candidacy in its third iteration, and a man who has had years to prepare for this very moment, this recurring lack of awareness gives credence to his opponents' jabs that he's an antique.

This latest and sharpest example of Biden's 19th century petrification makes it clear he's not running a modern campaign, but has instead dusted off an old playbook, one in which his support of mass incarceration, his grilling of Anita Hill, his defense of the Hyde Amendment, maybe even his winking affection for Old Southern Dixiecrats, would have been overlooked -- acceptable even -- instead of disqualifying.

But times have changed. It's too bad no one bothered to tell ol' Joe.