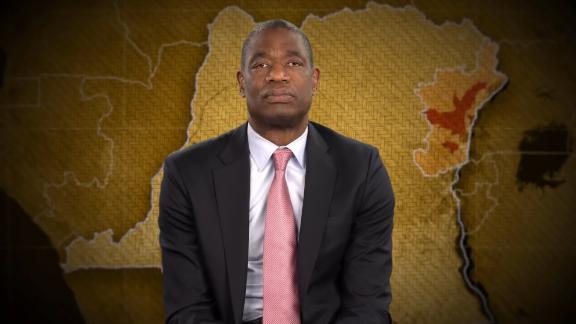 Dikeme Mutombo made this video to help stop the spread of Ebola in his home country, the Democratic Republic of the Congo.

Having spent 18 years in the NBA and standing at 7 feet, 2 inches, former basketball star Dikembe Mutombo is highly recognizable. But he perhaps is just as well known for his humanitarian work away from the court.

Now Mutombo has teamed up with the US Centers for Disease Control and Prevention to help spread communication about Ebola with the people of the Democratic Republic of Congo.

"I care deeply about our country, and I need your help to stop the Ebola outbreak in the north part of the country," Mutombo, who is Congolese, said in a public service announcement. "Ebola is real. The current outbreak is the country's largest ever. It is causing great harm to our families, our homes, and our communities.

"Ebola has sickened too many Congolese people, and this number is increasing every day. More than 6 of every 10 of our brothers and sisters sick with Ebola have died, including many of our children. There is widespread community concern and mistrust about the attempts to control the outbreak, and many people believe their voices are not being heard."

Mutombo, an eight-time All-Star and four-time NBA defensive player of the year, played for six teams in his NBA career, retiring in 2009. He was inducted into the Naismith Memorial Basketball Hall of Fame in 2015.

Civic Park will hold its grand opening on June 6