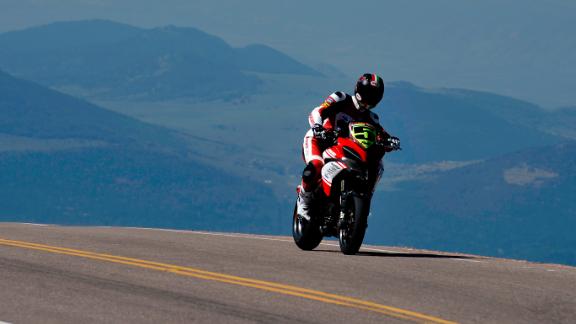 It's a motorbike race like no other. Sometimes there are animals on the road, sometimes lightning at the start line and sometimes hail at the finish. And in between a 12.42-mile public toll-road comprised of 156 turns to negotiate as competitors climb 4,720 feet, from the 9,390 feet start line to the 14,115 feet finish line at the mountain's summit.

Arguably nobody knows the twists and turn of the Pikes Peak International Hill Climb as well as Carlin Dunne, who has won the legendary race -- also known as the "Race to the Clouds" -- four times and will defend his title on Saturday.

"After the race, it can take weeks to come down," Dunne told CNN Sport's Don Riddell of the emotion of winning. "The experience is second to none."

The Ducati racer -- who is also a stuntman -- has been riding two-wheelers almost since he could walk. His father was a professional rider, while Dunne started his career as a bike salesman.

The 36-year-old Dunne says he allocates at least six months to prepare for the race.

"It really is something else to work so hard throughout the year to come to this," he told CNN Sport. "Because it's not just like you just load the truck up and come out here.

"And to get to the finish line at 14,000 feet, to be standing at what seems to be the top of the world, it's very hard to explain, it's hard to put into words."

It takes just under 10 minutes to complete the race, but Dunne's preparation is as much psychological as it is physical.

"For me personally, I meditate, I practice, I run the course through my head and I definitely try to leave a little bit on the table for that X-Factor when you come around the corner and there's a giant marmot or something in the middle of the racecourse.

"A couple times, I've even got caught out. I thought I knew where I was at, I came around the corner and it was a completely different corner.

"You can never take it for granted here. You have to be very humble."

Not to be taken lightly

Pikes Peak is the second oldest motorsport race in the USA, dating back to 1916 -- the oldest being the Indy 500 which began in 1911. Staged in Colorado, if the race takes just under 10 minutes to completes it's notorious for demanding high skill levels if you're going to win.

The race has been won by an American every time except in 2016, when French rider Bruno Langlois sped to victory.

And for Dunne -- who will be racing in the hill climb for the fifth time at the 97th edition of the race -- he must take the utmost care if he wants to make it to the finish line, let alone win.

"It can be dangerous if you don't take it seriously," said Dunne. "There's so many variables in a racecourse like this, everything from animals to the weather.

"It's almost like it's a living, breathing organism, this mountain, and you have to take it seriously.

"When you're sitting at the start line and you're looking up and potentially it's lightning strikes and hail at the finish line, it really plays with the racer's minds."

According to Dunne, it those 156 corners that are particularly challenging.

"Every corner is so different than the other one and it's really easy to get lost up there. You really have to do your homework. And you can never take it for granted.

He set the course record back in 2012, but that was eventually broken in 2017 by Chris Fillmore.

In an interview with Cycle World, Dunne revealed he took a break from professional racing to focus on his love of film -- from 2014 till December 2017, he worked on the "Dust to Glory 2" film -- before being invited back to race at Pikes Peak by Ducati.

"We all know that motorcycle racing can be dangerous, but you take the necessary precautions," Dunne outlined.

"Many people look at it -- who are not familiar with it -- they think it might be with reckless abandon, just a bunch of guys twisting a throttle, riding into oblivion.

"But we take it very, very seriously. Everything from wiring each and every bolt on the motorcycle, we have tire technicians out here making sure our tires are perfect and the temperatures are correct every single time."