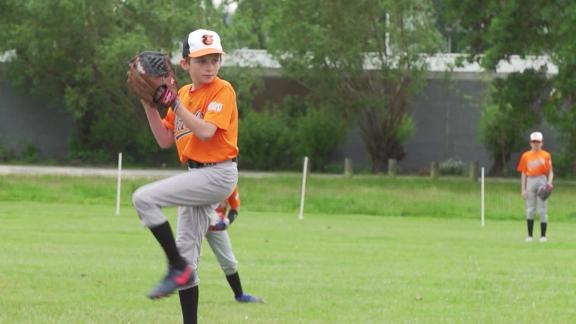 As the MLB comes to London with the Yankees and Red Sox, CNN takes a look at the burgeoning baseball scene in the most unlikely of locales: Britain.

In the grand history of the New York Yankees and Boston Red Sox rivalry, there are few people better placed to discuss its inner workings than David Wells.

Like his hero, the larger-than-life baseball legend Babe Ruth, Wells donned the uniforms of both clubs -- even wearing an authentic Ruth cap during a game -- and tasted World Series victory with the Yankees.

"A fight was ready to break out pretty much anytime and anywhere when those two teams played," Wells, who was also involved in some of the rivalry's fiercest battles during his three stints with the clubs between 1998 and 2006, tells CNN Sport.

"That's what made it so great. Everything was under a microscope because anything could set light to that fuse."

Wells was at the scene of one of the most well-known fracases of the 117-year old rivalry, and limped away with a freakish injury as a result.

Wells, who was conservatively listed at 250-pounds and rested that day, charged onto the field towards Martinez in defense of his coach -- only to pull a groin muscle a few steps into his sprint.

"I'm limping over there and I almost had Pedro. I almost had him. I was going to beat the (heck) out of him," he recalls, using a colorful expletive. "You don't throw Zimmer down on the ground like that; he was an old man."

Changing of the guard

This weekend, Londoners will experience a pair of Yankees-Red Sox matchups featuring a crop of far more congenial stars than those of Wells' era, led by the Yankees' Aaron Judge and Red Sox's Mookie Betts.

The games will take place a few miles from the north London soccer enclave of the city's most comparable rivals, Arsenal FC and Tottenham Hotspur.

Like Arsenal, the Yankees held the upper hand for decades -- 86 years to be precise -- before the Red Sox beat their nemesis in the playoffs en route to winning the World Series in 2004. Since then, Boston has won three more, including last year's title.

'Whatever happens is going to stick'

After that bench-clearing brawl in 2003, the Yankees eked out the series win on a seventh game, 11th inning home run by Aaron Boone -- the current Yankees manager.

But Wells, the winning pitcher in a pivotal Game 5, nearly cost his team dearly with his impulsive act.

"During the rest of the game, I'm in the training room getting treatment because I can't even pick my leg up," he says. "Thank God that injury didn't get in the way."

Teammate Bernie Williams chuckles upon learning of the incident. "He did that in true David Wells fashion," he says, shaking his head.

The 16-year Yankee center fielder was on the field during the Zimmer takedown. While it was frightening at the time, he was amused to see Zimmer -- who had previously managed the Red Sox, and died in 2014 -- receiving treatment for his wounds the next day, still pumped about the fight.

"Bernie, I apologize," Williams recalls Zimmer telling him. "You know, if I was still in the same (shape) as I was 25 years ago, I would have kicked his ass."

Martinez, who was not available for an interview for this story, has called the incident the biggest regret of his playing days.

"He throws a punch ... I had no choice but to defend myself," the Hall of Famer said last year to the Maine radio show The Ticket. "I regret it only because of his age. It's the only blemish I have, and something that I would like to take away from my career.

"But I would never get away, because it happened between the Yankees and the Red Sox, and whatever happens there, I'm sorry but it's going to stick."

In a storied career that saw his number retired by the Yankees, Williams played in 203 games against the Red Sox and belted 27 home runs. In the opening home game against Boston in his second season, he realized the matchups took on a different meaning.

"I was just a young pup coming into the league," he says. "This was the first day of the season ... It felt like the seventh game of the World Series. It was just pandemonium. It was insane."

Back then, Williams explains, the rivalry was more fan-driven, but tensions flared between the players beginning with the Yankees' record-setting 1998 championship run.

"In that five-year period, it became more personal, because we were facing each other (in crucial games) every year," he says. "At that point you start getting a lot of bad blood."

"How do you deal with this?" Williams would ask Yankees legend Yogi Berra, who won 10 World Series as a catcher in the post-World War II era. "Relax," Berra told him, "they've been playing us for 80 years. They can't beat us yet."

Berra was referring to the fabled Curse of the Bambino that plagued the Red Sox after selling Ruth to the Yankees in 1919 for $100,000.

But that curse was dramatically broken in the ALCS rematch in 2004. The Yankees became the first -- and still only -- team in MLB history to blow a 3-0 lead in a seven-game series.

Earlier in the season, Arroyo hit Rodriguez's left shoulder with a pitch, igniting a brawl that resulted in Boston catcher Jason Varitek shoving his mitt in Rodriguez's face -- a moment enshrined on the walls of Boston sports bars ever since.

With the season on the line, Arroyo was brought on in relief to preserve Boston's lead going into the 8th inning. Rodriguez hit a grounder back to Arroyo, then awkwardly slapped the ball out of his glove as he tried to tag him out, to score Derek Jeter from first base.

After a delay, the umpires called Rodriguez out for interference and nullified the run. The Bronx crowd pelted the field with trash, while helmeted police were called in as protection. On the next at-bat Yankees slugger Gary Sheffield popped out to end the inning, and Arroyo completed a career highlight.

"If I give up a run there the season's over, because you're on death's door," he reflects. "In Red Sox mythology, those were two of the biggest plays that year. It just happened that I was in the middle of both of them."

Rodriguez has a hazier recollection of those clashes with the Red Sox.

"Oh, it was a long time ago," he told CNN during a promotional tour for the MLB last year. "I mean they were just plays that were full of a lot of intensity, and in the heat of the moment you get into it, you are competing, and that's about it. That's all I remember."

Weeks before the Yankees acquired him in 2004, Rodriguez was courted by the Red Sox in a secret meeting with then-general manager Theo Epstein, he recently revealed.

The reigning American League MVP became irate when his trade from Texas to Boston was blocked by the MLB Players' Association over a voluntary salary cut.

"I was trying to give away tens of millions of dollars and the union did not let me," he explained on the Pardon My Take podcast. "It was like this (freaking) big buzzkill ... I knew that (the Red Sox) were going to win and win big, so I kind of wanted to be a part of it."

Instead, he went to New York and was immediately cast as a villain in Beantown, leaving him no choice but to embrace the rivalry. "Because of that, when I go to Fenway for the first time as a Yankee -- I mean come on nothing could be meaner or more cruel -- I think that's where the emotions started," he added.

Rodriguez did win a World Series with the Yankees in 2009, though the team avoided facing Boston that postseason. "The greatest thing that ever happened to me as a professional was becoming a Yankee," he said.

Built in 1912, Boston's Fenway Park is the oldest Major League stadium and one of the smallest by capacity.

It is also the least welcoming to opposing pitchers, says David Cone, who won four championships in his six years with the Yankees, before moving to the Red Sox for one season in 2001.

"That is by far the most intimidating bullpen to warm-up in," says Cone, now an announcer for the Yankees' YES Network. "The fans are very close, so you can hear every heckler right on top of you within a few feet."

Wells and Cone both threw perfect games for the Yankees -- only the 15th and 16th in MLB history, respectively -- allowing no batters on base over nine innings. The close friends were embraced as Yankees like few others, until they came back to the Bronx in Red Sox uniforms.

"It was a little bittersweet," recalls Cone of his return. "There were some cheers and there were some boos; it really goes back to the old saying that most baseball fans cheer for the laundry."

Wells felt the brunt of it from Yankee Stadium's ardent Bleacher Creature fans in 2005. "I got people throwing (stuff) at me in the bullpen, coins, hot dogs, cookies," he recalls. "I was villain number one."

Wells, however, didn't mix with Bostonians in the same way that Arroyo did, who spoke of fans standing and cheering as Red Sox players walked into restaurants.

"I hated it," Wells says. "I became very rude to people when I was in Boston because I didn't have any privacy. In New York I went out everywhere and nobody bothered me."

As a Yankee, Wells relished the Big Apple's nightlife, famously throwing his perfect game in 1998 on a 5.30 a.m. hangover -- "I did a facial on my bed, annihilated," he admits -- but Boston's locker room was far more suited to his personality.

That Boston clubhouse featuring the loose personalities of Manny Ramirez, David Ortiz and Johnny Damon (who would join the Yankees the following season and have money thrown at him on his return to Fenway), was more amenable to the ear-crushing volume of Wells' Metallica CDs.

"It was like a party after every game," he says. "The Yankee locker room was pretty much business."

Yankee manager Joe Torre, it turned out, was no fan of Metallica. His objections to the blasting of "Enter Sandman", which was later adopted by Hall of Fame closer Mariano Rivera as his theme song, caused frequent arguments in the locker room, says Wells.

"He would go turn it down. I'd go turn it back up," he recalls. "Joe and I would fight on it, and it was unbelievable."

Wells, who owns a world-class collection of Babe Ruth memorabilia, was forced to take it off after the first inning. "Torre fined me $2,500 for wearing it," he says.

Must-watch videos of the week

Local stores sell out of respirator masks amid coronavirus fears