MLB is making a play for popularity in Europe. But in Finland, they've already made baseball their own 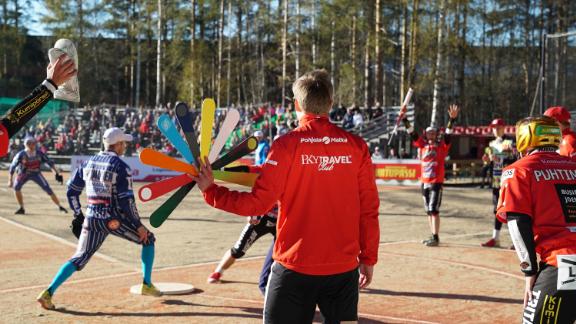 Finland has its own version of America's game. It's called pesäpallo and it's faster, more colorful and could make US baseball feel a little bit boring.

It's baseball, but not as you might know it.

Pesäpallo, as it is called, is considered the national sport in Finland. It has a die-hard following, particularly in the country's rural towns, where spectators in stadiums often outnumber the local population. And, for those who may find baseball's sluggish pace of play a drag to watch, the Finnish alternative offers a welcome change: non-stop action.

Pushed to compare the two, many Finnish players go so far as to describe the American game as, well, dull.

"Maybe I could use the word, a little bit boring," Jussi Pyysalo, chief executive of Superpesis, the top professional Finnish league, told CNN, with a laugh.

At least that's what former Finnish Olympic track and field star Lauri "Tahko" -- "grindstone," in Finnish -- Pihkala thought. According to historians, Pihkala dreamed up pesäpallo nearly 100 years ago, after attending an apparently lackluster baseball game in the US.

He brought the Frankenstein sport back to Finland in the 1920s, where he developed it as a military training program -- a strike in pesäpallo is known as a "wound."

The sport survived wartime in Finland, and its popularity has only grown in the decades since. Today, as Major League Baseball is struggling to attract younger fans, with attendance rates at the lowest levels in years, it's Finnish counterpart is experiencing its best numbers to date.

At the opening game of the season in Joensuu, home to last year's Superpesis champions, Joensuun Maila, the stadium was packed with Finnish fans young and old. Caps for a few MLB teams dotted the crowd, but most were decked out in red "JoMa" jerseys.

To an untrained eye sitting up in the stands, the scene looked much like a regular ballgame. But, while both American baseball and pesäpallo are played with a bat and a ball, the similarities end there. The variations range from the tactics to kit, terminology to the playing field itself.

One of the most obvious anomalies: there's no mound. Pitchers stand across from the hitter, crouching low before launching the ball vertically above the plate -- at least one meter overhead. The field itself is also laid out differently: long and narrow, compared to the traditional diamond. Knock one out of the park? That's not a homerun, known as a "kunniajuoksu" here, it's a foul ball.

Batters do still get three strikes, but if they get a hit on the first two, they don't have to run.

And if they do, it's not counter clockwise around a diamond. Instead, players run in a zigzag pattern along increasingly longer paths -- sprinting to the left to get to first base, then cutting across the infield to slide into second on the right, and finally left to third before running home.

"It's much more active because almost with every pitch you have a strike and the ball is on the move and the runners are on the move so there are no empty moments in the game," Pyysalo says.

There's so much going on, it's difficult to know where to look.

As the first player on Joensuun Maila went up to bat, his teammates circled around home-plate to jeer at the pitcher and shout instructions of when to run. In this arena, hitting is transformed into an aggressive art of imperceptible bunts and long balls, with nearly every pitch put into play.

Standing to one side, the team's coach thrust his hand in the air, gripping a rainbow-colored fan resembling the feathers of a peacock to signal to the hitter and base runners. And with the crack of the bat, the hitter was off, racing across the synthetic turf and diving across a layer of sand into first base.

It's about the most emotion you'll see from stereotypically stoic Finns. For many here, coming to a game is almost like going to church, says Joensuun Maila CEO Jonne Kemppainen -- a place to release emotions "good and bad."

"In the small cities, pesäpallo culture comes with the blood," Kemppainen, who retired from Joensuun last year, says.

Pesäpallo has become an intrinsic part of the culture in villages across Finland, where it's taught to school children and played on fields during the summertime, when the sun almost never sets in northern parts of the Nordic country. Just like in America, it's also an excuse to crack open a can of beer.

From the most elite divisions of Superpesis, to rural teams, pesäpallo is supported through a mix of local business sponsors, government funding and a deep roster of enthusiastic volunteers, who live and breathe the sport.

The big leagues for both men and women are televised, but the highest salary is only around $55,000 -- far less than the multimillion dollar MLB contracts -- so many players have second jobs. And, even though they may not be full-time pros, the prowess of these Finnish athletes' has even piqued the interest of MLB scouts.

"When you see the size, the speed, the strength, the explosiveness, just the quickness those guys had. Whether it's fielding a ball, throwing a ball, hitting a ball, running, everything was very high level," Troy Williams, a New York Yankees scout for Europe, Africa and the Middle East, told CNN Sport. "There were several guys who threw the 92 mph to 97 mph range."

Williams made headlines in Finnish papers a few years ago when he turned up at an All-Star pesäpallo tournament just outside the capital Helsinki. He said he was shocked to see fielders throwing fastballs at speeds comparable to MLB pitchers.

"I was even surprised by how hard those guys did throw and how quick and explosive and fast and powerful they were at very similar skills that we have in baseball."

One of the most skilled players in the game is Tuomas Jussila, a two-time league MVP, who helped lead Joensuun Maila to the championship last season.

Despite not making an MLB-level salary himself, Jussila says he isn't tempted to trade his carbon-fibre bat for a Louisville slugger.

"I have followed and do occasionally watch baseball, but since I've gotten so used to the speed and dynamics of pesäpallo, baseball seems more sluggish," Jussila, who plays pesäpallo full-time, said.

And most of his teammates agree.

"In our towns these guys are stars. They are not superstars, no. They don't need to make a lot of money, no. But, still they are proud of it and their hometowns are proud of them too," Pyysalo said.

"It really was a dream come true," Kinnunen said of the win. His whole family was out in force to root on their team in the opening match in early May, their youngest son banging away on a drum.

Asked whether the MLB's efforts to attract new audiences in Europe will work, these fans say that, in Finland at least, they're happy to stick to pesäpallo.

But, up above the crowds, surveying the field from a VIP box, Kemppainen says he still sees at least one reason to tune into the American sport.

"I have MLB TV in my phone and I watch it every night," Kemppainen said, a smile spreading across his face.

"Because I think that's the best way to get sleep."