US women's soccer team to world: We got this 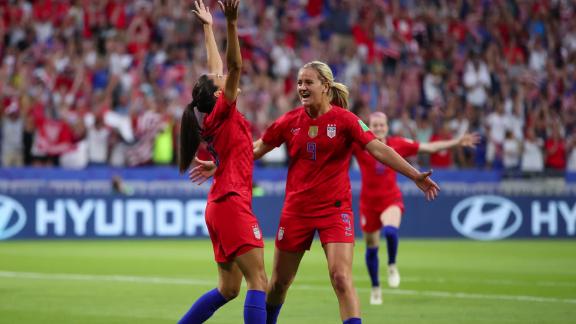 The US national team made the finals of the Women's World Cup tournament, defeating England 2-1. CNN's Don Riddell reports they'll face the winner of the upcoming semi-final match between the Netherlands and Sweden.

Stop telling the US Women's National Team what to do. Seriously. It's exhausting. And that includes trying to coach their coach, Jill Ellis, who sent the Twitterverse into a frenzy when the lineup for Tuesday's semifinal came out and star forward Megan Rapinoe was not on it. Christen Press, who started instead, answered any questions when she headed the ball into the net just 10 minutes in. The US women won a tough match against England decisively, with an additional goal from Alex Morgan.

In the leadup to the 2-1 win, the sideline drama stopped just short of the British accusing the US of deflating balls. From "hotelgate" (in which England manager Phil Neville chastised the US on Sunday for scouting his hotel to stay should the US win but failed to mention that the US also scouted the hotel in Nice, where the third-place game will be played, in case they lost) to Piers Morgan's whining over Rapinoe's grand victory pose (and his subsequent Twitter meltdown during the semifinal), it seemed that this team, which defender Ali Krieger calls the best -- and second best -- in the world, couldn't make a move without a judgmental microscope all over it.

"Are these American stars too arrogant?" bellowed the UK's Daily Mail, with Morgan's and Rapinoe's scowling photographs splashed across the fold. "They are so unpopular that even the French will be backing England."

It makes sense, though, right? That heading into today's semifinal, the team with four gold medals and three world titles, who have reached the semifinal round in all eight of their World Cup appearances, would be called arrogant by a team with, well, none of those things. At this point, the only thing missing was a costumed King George III standing on the Hamilton stage singing, "I am so blue/I thought that we made an arrangement when you went away/you were mine to subdue."

If nothing else, this tournament has put a lot on the table for US sports fans to talk about. From the smashing -- literally -- debut of the US against Thailand, the 13-0 blowout that some called excessive and others deemed powerful, to Rapinoe's battle with the man who sits in the Oval Office, the fact that some of the best soccer in the world is being played, that Sweden beat Germany in the quarterfinals, that France battled back against the US with the greatest of hearts and legs, and that millions are watching all of it is almost beside the point.

And with England, who put down Norway 3-0 to reach the semis, the US had a more than worthy foe; Ellen White's gorgeous equalizer made that clear. But the need to critique how the US women have worked their way through the bracket has taken the focus off some of the more critical issues. That they are suing their own federation for equal pay, to be sure, remains central, especially as the Daily Mail dubbed them a "team of all-conquering multi-millionaires."

But as WNBA star Sue Bird wrote in her loving tribute to girlfriend Rapinoe, it is almost passé to think there's still a debate about it. On the one hand, it is about equal pay with the men, and on the other hand? Well, there is no other hand: The women are selling the shirts, drawing the ratings and continuing to establish a legendary record that doesn't need to be compared to anything. "I had a long thing prepared here about the equal pay debate," Bird said. "But then I thought about it some more, and to tell you the truth ... I'm kind of done with that."

After the epic quarterfinal between the US and France on Friday, many lamented that an American victory meant the French would be unable to play in Tokyo next year at the Olympics, a venue that is becoming increasingly important (though it's not the World Cup) in international soccer. But that's not on the team, just as it isn't on Sweden that Germany will not be able to defend its gold medal next year. Talk to the UEFA (Union of European Football Associations) about its foolish rules that prevent an actual Olympic qualifying tournament. And please don't come down on Morgan for her "sipping tea" victory pose after she headed the US winner into the net -- and on her birthday, no less.

As the US now moves toward the final game, one last takeaway remains: Yes, the USWNT, so far ahead of the pack in so many ways for so long, is being challenged. But as seen right now in France, those challenges -- challenges that have made the last several games feel as tense as any final -- primarily are coming from Europe, which a quick look at the tournament bracket powerfully demonstrates.

Bottom line? Across the board, the women's game needs support, institutional, structural support. Again, it isn't on the US and Sweden that France and Germany are ousted from Tokyo next year. It's on soccer. It's on FIFA. It's on the national federations. As Shireen Ahmed wrote in Time before the tournament, the fact that the most powerful teams in the world are fighting battles over equality speaks volumes about the struggles of those who have gone home, especially those from Africa, Central and South Asia, the Middle East and Latin America.

The women's game deserves support. Women's sports deserve support. So the fanfare and fandom, the frenzy and the nail-biting that we've seen throughout this World Cup as the US women have battled and attacked their way into the World Cup final would be nice at other times of the year, for all sports and for all athletes. Because, as Bird said in tribute to Rapinoe, who has been the center of so many debates about sports, politics, sexuality, patriotism and so on, at the end of the day, this is about "a world-class athlete, operating at the absolute peak of her powers, on the absolute biggest stage that there is."

Cottage Grove man sentenced to 20 years in prison for rape

More than 1,000 to be vaccinated at mass clinics in Lane County