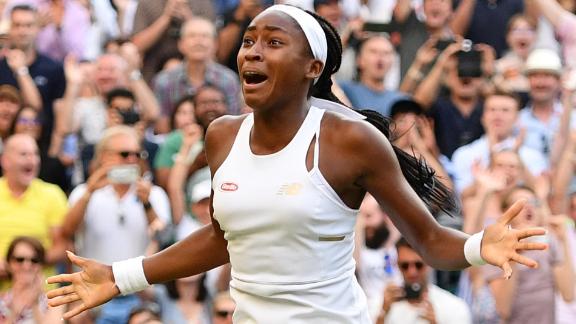 American tennis player Cori "Coco" Gauff came from behind to defeat Polona Hercog in the third round of Wimbledon. CNN's Alex Thomas reports.

Already tennis' newest favorite, Gauff earned cries of "we love you" on her debut on the most famous court in the world as she engineered an electrifying rally to keep her historic Wimbledon run going.

If you didn't know better, you'd think Gauff played for Britain instead of the US.

"The support has been outstanding," her affable father Corey told a small group of reporters. "Every match they're calling her name. I sit there and go, like, 'What in the world is going on?'"

A lot went on Friday.

It looked like his daughter's stay at the grass-court grand slam was about to end but the 15-year-old saved two match points to defeat Polona Hercog 3-6 7-6 (9-7) 7-5 to the delight of most of 15,000 assembled on Center Court.

"She's always had that fight," her father said. "She always had it ever since she was a little baby. She had that feistiness in her. She wouldn't quit."

Gauff left the arena to rapturous applause and gave autographs to her adoring public while Hercog could only rue what might have been. Corey and wife Candi are near celebrities now, with fans taking selfies with the duo.

But spare a thought for the Slovenian, whose lone support from her box came from coach and husband Zeljko Krajan. There was a cast of 17, meanwhile, next door in Gauff's box.

"I'm sure I will be thinking about the match in the next days, but hopefully as little as possible," Hercog told reporters.

Before play even started, Gauff was the fourth favorite according to some British oddsmakers despite only ever winning one top-level encounter prior to Wimbledon.

READ: Coco Gauff, 15 declares -- I want to be the greatest

After beating Venus Williams in the first round — bridging a 25-year age gap — to become the youngest player to win a match here since Jennifer Capriati in 1991, sweeping past 2017 semifinalist Magdalena Rybarikova and then coming back against Hercog, she might be pushed up even further.

Her life won't ever be the same. And all this after being a wildcard — in qualifying.

"It's just crazy," Gauff, the youngest ever qualifier to land in Wimbledon's main draw, told reporters. "I remember before I played Venus, when you walk to leave the practice courts, there are people waiting. One little kid asked me for a picture.

"Then after the next day, after I played Venus, everybody was screaming my name. It was pretty surreal how life changes in a matter of seconds."

Gauff had celebrities direct messaging her after her second-round tussle and said Friday that Beyonce's mom Tina, posted her on Instagram.

Her winning displays, combined with the massive support she is receiving and her pedigree as a junior, presumably earned Gauff a place on Center Court instead of former world No. 1s Caroline Wozniacki — who lost earlier — and Karolina Pliskova. Such is her pull already.

On Thursday, host broadcaster the BBC noted that its highest peak Wimbledon audience was Gauff's victory over Rybarikova on Court 1.

She earned a clash with another former No. 1 Monday in Simona Halep, and that will likely be on one of the two biggest courts.

Having to go through qualifying, Gauff might be especially happy to have an extra day off to rest, recover and prepare for the Romanian. Wimbledon is the lone major where there is no play on the middle Sunday.

Capriati made the semifinals here as a 15-year-old 28 years ago and if Gauff defeats Halep, it would be a brave individual to bet against her matching that achievement.

The 60th-ranked Hercog stood on the cusp of history herself, having never made a grand slam fourth round.

As gutsy as Gauff was in rallying from a set and 5-2 deficit, Hercog will lament not putting her younger opponent away.

The American saved the first match point with a backhand slice that caught the line and kick start her comeback. The complexion changed.

If there was little Hercog could do then, it was quite the opposite on the second match point at 40-30 in the ensuing game.

READ: Roger Federer: The power and presence of the $120 million man

Closing out any contest at a major is difficult and especially so when bidding to get to pastures new. The tension was there for all to see as Hercog double faulted.

Prior to getting broken at 5-3, she hadn't even faced a break point.

What if for Hercog

"Especially the first two sets I don't think she had any chances," said Hercog. "If I made that serve or something, it would just be 6-3 6-3."

After her wicked slice neutralized the Gauff backhand that had done so much damage in the first two rounds and ripping forehands, her errors increased. And Gauff adjusted.

Instead of trying to attack those slices, she countered with her own.

"I thought that Coco tactically changed her game, which is very encouraging to me," multiple grand slam winner Mats Wilander told CNN. "She didn't hit her way through Hercog so to speak, she was slicing the ball back and giving Hercog no pace suddenly. That's for me the biggest sign of something special in Coco.

"I don't buy the, 'Oh she deals with pressure.' There's no pressure, she's 15, she's completely unafraid. She's a freak athlete but the tactical part to me is pretty incredible.

To relieve the tension in the tiebreak, a bird landed on Gauff's side at 2-2 before being chased away by a ball kid. It was soon flying high, just like Gauff is now.

Leading 5-3, two forehand misses arose from Hercog as the Slovenian's difficulty in closing out proceedings resurfaced.

Gauff took her third set point following a marathon rally that featured the duo trading backhand slices prior to the American ripping a backhand cross court to open the court. A swinging volley forced a third set.

Hercog called for the trainer for a buttocks injury and Gauff left for a bathroom break. The pause didn't alter the momentum as Gauff led 4-1 in the third, only for Hercog to get to 4-4 despite leg cramps surfacing.

But showing incredible poise, Gauff responded with big serves to get to 5-4.

"I could see in her eyes she was feeling the pressure, but she came out and served amazing at 4-4," said Corey.

Her opponent then paid for not capitalizing on a game point at 5-6, with Gauff leaping and dropping her racket after Hercog's lob went long 13 minutes shy of the three-hour mark.

It did but his popular daughter still remains at Wimbledon.