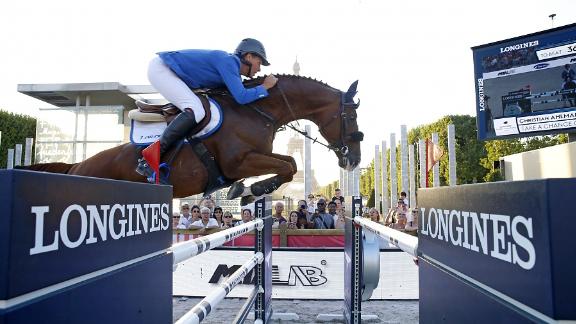 Five days after becoming the father of a baby girl, Christian Ahlmann raced to victory in the Longines Global Champions Tour in Paris.

What a week it has been for Christian Ahlmann.

After becoming the father of a baby girl on Monday with his partner, Judy Ann Melchior, the German rider raced to victory in the Longines Global Champions Tour for the world's top showjumpers in Paris five days later.

"It has been an amazing week, I already had my daughter Ella born on Monday," Ahlmann said, after taking his fifth LGCT victory. "My concentration was not what it should be. Judy wasn't happy when I went (to the show). She said I better do well this weekend. I think she is happy now!"

"Our daughter Ella was born this morning!! 53 cm and 3780 Grams of joy and happiness!" Melchior said in a Facebook posting on July 1, after welcoming the couple's second child.

His win in Paris earned Ahlmann €99,000 ($111,192), and a ticket to the season-ending GC Prague Playoffs November 21-24, which will pit the individual winners of each leg against each other in the season finale.

Although five out of seven riders had a clear round in the jump-off at the Champ de Mars in Paris, the experienced Ahlmann and his big-striding 10-year-old bay stallion Take A Chance On Me Z were fastest in a time of 35.60 seconds, more than 1.2 seconds ahead of Belgium's Celine Schoonbroodt-de Azevedo and Chepetta and 1.7 seconds clear of France's Kevin Staut and Calevo 2.

"I had to work hard and my horse had to work hard," said Ahlmann. "He jumped fantastic in the qualifier and this is his first Grand Prix win today. I can't be more happy and more proud of my horse. I had a really fantastic feeling, in the difficult lines he was really with me."

Ahlmann, 44, was delighted to qualify for Prague, saying he had watched it last year "and it was one of the main goals for this year to qualify for this class and I'm really looking forward to it."

"I have had a consistent season and I am very privileged to have such good horses and good results," said Devos,who finished in 19th place in Paris with Claire Z.

"I am very happy with their performance. There are a few riders behind me who are going well. It will be right until the end but I will come forward with fresh horses at the next shows and do my best to stay in the lead."

READ: Danielle Goldstein on the secrets of her success

READ: Jessica Springsteen on the secrets of her success

The Global Champions League team event was won by Jessica Springsteen and Shane Breen of the Miami Celtics, who had just two faults over two days.

"Shane and I were speaking before the class, and saying we might have to make up the time to win, but we saw a lot of faults so wanted to keep it together and ride for the clear," said Springsteen, the daughter of rockstar Bruce Springsteen.

"The points have been really close all season long, and we're excited to be in the running. We've been consistent so we're hoping to keep that up."

Their strategy paid off, as the Celtics moved to second place in the overall rankings with 202 points, just three points behind the Swans. St Tropez Pirates are lying in third place, with 197 points.

"It was a great competition, with everything so close," said Ireland's Breen.

The next 12th leg of the Tour will take place in Chantilly, close to Paris, on July 13.