'Who will win? I don't have a clue': Grand finale to world's most unpredictable championship 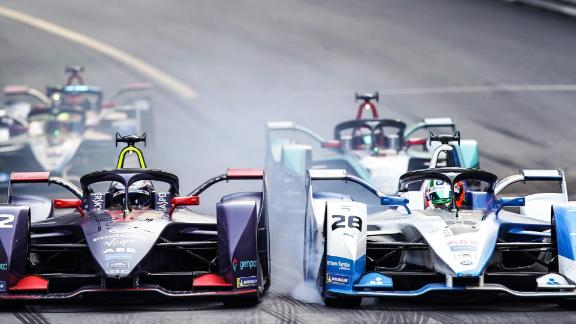 As one of the most thrilling season in motorsport draws to a close, Dario Franchitti previews the Formula E action in New York.

After 11 races and eight different winners, one of the most exciting seasons in recent motorsport history comes to an end this weekend.

With 58 points available, the New York double-header will determine who is crowned champion in season five of Formula E.

It would take a monumental effort for any driver to overhaul Jean-Eric Vergne's 32-point lead -- or a major disaster from the Frenchman -- and stop him becoming the sport's first two-time champion.

"It's so difficult for anyone to catch him," former IndyCar driver and Formula E commentator Dario Franchitti told CNN Sport. "As long as he doesn't make a mistake, it's likely he will be the first double winner -- and he is very deserving.

"It's been such a competitive season, so many different winners and such a mixed up field. We are now in a position where literally anyone in Formula E can win a race."

Defending champion Vergne has endured an up and down season -- as have most of the field -- and didn't taste victory until Hong Kong, the sixth race of the calendar.

Changes to the rules before the start of the season meant that those at the top of the championship would go out to qualify first when the track conditions are least favorable.

It's made it almost impossible for any driver to take control of the championship after having taken the lead, something those on the grid have been far from pleased about.

"It's brilliant as a commentator!" Franchitti says. "But people say who will win? I don't have a clue. The first people to go out are top five in the championship and in that situation the track isn't at its best -- the street circuits are dusty and dirty -- so it tends to be slowest session.

"We're talking tenths of a second between success and failure and the championship protagonists tended to be at back of field. We loved it, but drivers weren't so keen because it mixed it up. But the field of cars is so competitive -- it's been a fantastic season.

"It's so unlike motorsport, so unlike F1 -- that is the point -- that is what the organizers wanted to achieve. There are no preconceived ideas. It's electric racing, completely different."

READ: Motor racing series aims to be the Formula One of the skies

In addition to the popular Fan Boost feature, Formula E this season introduced Attack Mode which allows drivers to deviate off the racing line and drive through a section of the track in order to pick up some extra energy.

While fans believe it has made the on-track action even more exciting, detractors have labeled the features as gimmicks.

But in only its fifth season, Formula E can boast to being one of the fastest growing sports in the world and attracted more than 300 million viewers globally to watch at least one race on TV last season, according to Forbes.

An average of 27.1 million watched each individual race, a huge increase on the 18.6 million that tuned in for each race during the 2016-17 season.

READ: Oliver Rowland finds it's his time to shine in electric racing series

This rapidly increasing popularity has seen not only big name drivers make the switch to all-electric racing, but also the biggest and most prestigious manufacturers -- with more set to join next season.

"Purists are up in arms," Franchitti says of the sport's criticism. "Trust me, I'm a purist as well but it's been a phenomenal addition to world racing; Fan Boost, Attack Mode -- what is most entertaining way to make a race?

"Manufacturers have been flocking to Formula E, next season we'll have Porsche and Mercedes. How much of a chance do they stand against established constructors?

"These teams are incredible good at what they do but Porsche and Mercedes are fantastic manufacturers, they dominate the fields of motor racing.

"I think the field will be raised again."