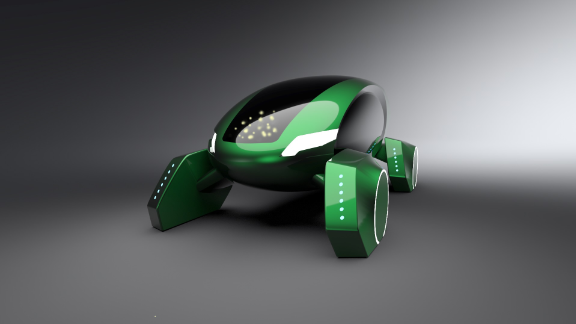 If you're tired of arriving home after work to find yet another online delivery has gone AWOL, then a new autonomous delivery vehicle could soon help.

If you're sick and tired of arriving home after a hard day at work to find yet another online delivery has gone AWOL, then a new autonomous delivery vehicle could soon be here to help.

Kar-go is the brainchild of the United Kingdom-based Academy of Robotics, which describes it as "Europe's first road-worthy autonomous delivery vehicle."

Using AI, this autonomous delivery vehicle offers customers an app -- similar to one used when ordering a taxi -- allowing them to choose when and where their packages are delivered.

Companies like Tesla and Amazon have invested heavily in autonomous vehicles, an innovation that has the potential to create a sea of change in business and society.

READ: Mercedes are coming ... should Formula E be worried?

READ: Jump aboard the eDumper, the world's largest electric vehicle

Resembling something like a green egg on wheels, Kar-go's aim is to reduce the cost of what's known as the "last mile delivery challenge." This is the final stage of your online package's journey, from local depot to your front door.

Labor costs, paying drivers, the cost of fuel and the vehicle costs for maintaining fleets of small vans all contribute to making this the most expensive part of the delivery process.

The first part of the package's journey is far cheaper, with high volumes of packages being transported to and from the same location. Conversely, at the other end, drivers transport smaller shipments to several different locations -- where the recipient may not even be available to collect.

The process becomes even more cost ineffective in rural areas where drop off points are miles apart.

"Britain has a rich heritage in automotive design and a promising future in AI," said Academy of Robotics founder William Sachiti.

"In creating Kar-go, we wanted to take advantage of this drawing on the strength of British motoring heritage and design talent and combining this with the latest AI technology to produce a vehicle which will deliver goods safely, sustainably and in style."

Electric, self-driving, economic and capable of working 24/7, Kar-go runs at a cost of just 1.2p (1.5 cents) per mile and promises to reduce the last mile delivery cost by up to 90%.

READ: Motor racing series aims to be the Formula One of the skies

The vehicle AI uses "terrain-training" technology to become an expert on its own individual route, learning from past experiences in order to help it deal with new future obstacles on the road.

Kar-go also has it's very own internal sorting system, allowing the vehicle to shuffle the packages it's carrying into the correct order for delivery.

Designed in conjunction with the Driver and Vehicle Licensing Agency (DVLA) -- the UK government organization that looks after driver and vehicle records -- Kar-go will still be able to function safely on unmarked roads in both urban and rural areas.

The vehicle was unveiled at the Goodwood Festival of Speed, hosted in the south of England, by Sachiti.

"So Goodwood was a particularly fitting venue to kick-off the next chapter in our story," he said.

By 2030, the Society of Motor Manufacturers and Traders predicts the autonomous market could add £62 billion ($77.5 billion) in economic growth in the UK, creating more than 420,000 new jobs.

And it might not be long before you see them on a road near you -- Kar-go aims to launch its first road tests before the end of the year.

Arrest made in murder of couple from Springfield

What Supreme Court ruling on birth control means in Oregon