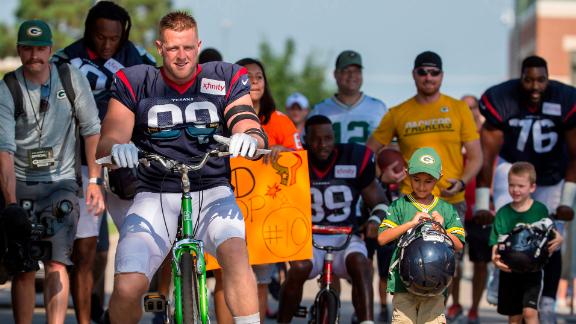 The Texans and the Green Bay Packers are doing joint training camp practices in Wisconsin and with the practice comes an age-old Green Bay tradition: riding young fans' bikes to the practice field. J.J. Watt, a Wisconsin native, was riding a boy's bike to the field when the seat suddenly broke and Watt had to carry the bike.

A childhood dream of Houston Texans defensive end J.J. Watt's didn't end up quite as he planned at training camp on Monday.

The Texans and the Green Bay Packers are doing two joint training camp practices in Wisconsin ahead of their NFL preseason game on Thursday, the first time since 2005 that the Packers are hosting another NFL team for training camp.

With the practice comes an age-old Green Bay tradition: riding young fans' bikes to the practice field. Children line up with their bicycles to wait for the players, who each pick a bike to ride into practice -- cartoon characters, colorful paint and all.

Wisconsin native Watt grew up as a Packers fan and said he has been dreaming of participating in this event since he was a kid.

But as Watt -- who stands 6 feet, 5 inches tall and weighs about 288 pounds -- was riding his tiny bike to the field on Monday, the seat suddenly broke. He decided to improvise and carry it the rest of the way.

But there's a happy ending: Watt confirmed that he'd bought the boy a replacement bike. The child will also have an amazing story to tell.