Sue Gordon's departure is bad news for Trump and country 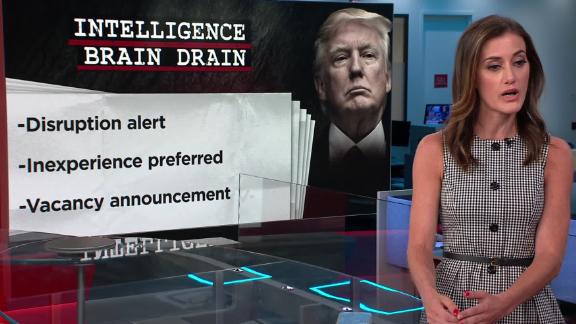 CNN's Samantha Vinograd says the resignation of Sue Gordon, after being passed over for the role of Acting Director of National Intelligence, will introduce unnecessary disruptions into an already strained intelligence community.

President Donald Trump is quickly losing his top intelligence officials, and his self-inflicted brain drain will continue to have dangerous consequences for US national security. The resignation of Sue Gordon -- the highest-ranking career intelligence official in the country -- after being passed over for the role of Acting Director of National Intelligence, will introduce unnecessary disruptions into an already strained intelligence community.

Much to his dismay, Trump isn't an oracle, and his disregard for intelligence in favor of his personal convictions has led policymakers to ignore or inappropriately react to threats like white nationalism, election attacks and North Korea. Trump's prolific personnel problems also signal to our enemies and allies that losing intelligence doesn't phase him -- setting the stage for actual threats to go unaddressed, while we witness the hollowing out of US intelligence.

Experience does matter in Trump's eyes. Often, however, it seems it's a disqualifier -- rather than a resume enhancer for positions in his administration. Gordon's decades of work under presidents from both parties -- and her work at the CIA, National Geospatial-Intelligence Agency, and DNI -- provided her experience covering a wide range of issues and responsibilities. Her most recent position -- as the Principal Deputy Director of National Intelligence (PDDNI) -- kept her busy "advancing intelligence integration across the IC, expanding outreach and partnerships, and driving innovation across the Community," according to the Office of the Director of National Intelligence.

She did it all, so to speak, and that's what may have bothered the President. His son, Don Trump Jr., tweeted about Gordon's relationship with President Barack Obama's former CIA Director John Brennan and "the rest of the clown cadre," and other White House advisers reportedly shared the view that Gordon was too close with President Obama's team. Despite the fact that she became PDDNI during Trump's administration, conspiracy theories tend to get Trump's attention.

When publicly questioned about working with Trump, Gordon spoke about the need to ensure that the intelligence community's work is represented truthfully and for intelligence leadership to make sure it can't be misrepresented

As an experienced intelligence officer, according to the President, Gordon performed her responsibilities with "candor" -- her job was to tell the President what he needed to hear, not what he wanted to hear, even if he rebuffed the analysis she tried to present.

His decision to turn his back on Gordon's experience signals internally -- and globally -- that the President views experience not as a virtue, but as a liability.

Naming Gordon Acting DNI would have provided continuity. Her experience as PDDNI means she was already working on a lot of the areas that the Acting Director is also responsible for. She would have had added responsibilities -- and a learning curve -- but it would have been far less steep than newly named Acting Director of National Intelligence Joseph Maguire will have.

As Director of the National Counterterrorism Center (NCTC), Maguire worked on a narrower range of issues and functions. And it's unlikely he has done a deep dive into election insecurities or North Korea -- two issues that require immediate high-level attention. He also hasn't been looking at resource allocations in those areas or coordinating activities across the 17-member intel community. Gordon had that experience.

He'll need time to get up to speed -- and that transition period is higher risk. Our enemies understand that and may seek to take advantage of this period by ramping up their activities against us.

As Trump looks for a replacement for outgoing DNI Dan Coats -- he claimed on Friday that "everybody " wants the DNI job -- it's hard to imagine what experienced intelligence professional would be willing to take on the role. An intelligence analyst's job is to present unvarnished analysis and to flag issues that may not be on the President's radar, even if they don't jibe with his views or campaign promises.

But the President has personally attacked the intelligence community when their analysis doesn't track with his own, and there's reporting that the intelligence community may not even be comfortable briefing him on key operations because of security concerns. The New York Times reported that Acting Chief of Staff Mike Mulvaney told former Department of Homeland Security Secretary Kirstjen Nielsen not to raise election security with the President because it could upset him. (Mulvaney says he doesn't recall saying that.)

But the Times also separately reported that the intelligence community had concerns about briefing him about another critical topic -- cyber operations against Russia -- because of fears that he would countermand their efforts or discuss them with foreign officials.

Add to that his constant disparagement of the intelligence community, seeming preference for Putin's assessments over the intelligence community's, and his decision to grant Attorney General William Barr authority to declassify intelligence as part of his probe into surveillance of Trump's 2016 campaign, and it's not a compelling vacancy announcement for anyone who wants to perform the actual responsibilities of the job.

Trump isn't looking for a DNI. He's looking for a research assistant for Barr's probe and a supervisor to "rein in" the intelligence community. That's likely what led him to nominate Texas Rep. John Ratcliffe as acting director -- a nomination that was withdrawn because of sharp criticism of his inexperience from the left and a lack of enthusiasm for him on the right.

It will also signal to those seeking to sideline the US -- or, worse yet, hurt us -- that the President doesn't want to hear what's happening, because instead of focusing on our security, he's focused on himself.