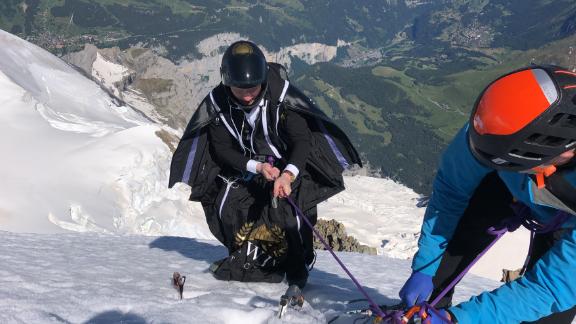 Anton "Squeezer" Andersson, the daredevil who in 2017 became the youngest wingsuit pilot to fly through a solid target at 250km/h (155mph), has been back on the record-breaking trail.

The 25-year-old, from Skövde in the south of Sweden, attempted two new record-breaking jumps in July: the longest distance wingsuit flight from a cliff, and the smallest target hit from a BASE jump.

Andersson's double achievement involved two grueling climbs, the first beginning in complete darkness in the early hours of the morning.

Accompanied by a support team of three climbers, their paths to the summit lit only by helmet lamps, he scaled Switzerland's tallest peak: Jungfrau, near the city of Bern, standing at 4,158 meters.

"I've climbed mountains before, but this was really raising the bar. Navigating crevasses with ice axes, crampons and ropes," the Swede told CNN Sport.

READ: 'As I took off I knew there was no way back,' says snowboarder
READ: Climbing 3,000 feet without ropes

Near the top of the mountain, Andersson needed to abseil down an exposed face, in almost complete darkness, above a sheer drop of 500m. He describes the descent, and being lowered down by his colleague, as one of the scariest moments of his life.

"It's this incredibly deep, deep feeling of fear," he explains. "It's a huge commitment of trust, and the fear, which is felt through the entire body. It's like your entire body is just bubbling, from top to bottom, it's fully vibrating, I cannot describe it."

Once at the summit, switching from climbing to jumping mode was also a challenge.

"The climb in itself is more like an endurance thing," Andersson says. "I have to ensure that I have enough energy to do the jump and have a clear mind. It's definitely harder to focus -- the air in the atmosphere at that altitude is much thinner."

READ: 'The thrill, the fear and the excitement'
READ: Ross Edgley -- 'It was goosebumps upon tears, upon smiles'

The Swede has a routine that he follows to prepare, which helps banish any doubts about the task ahead.

"To control the fear, I always have to go into the same 'jumping mode,'" he added. "It's a ritual, a technique that I do before jumping off, I'm taking deep breaths and getting my body fully connected to what I'm going to do. Feeling the winds, judging the entire situation, and then getting ready and pushing off."

Once airborne, those doubts quickly evaporate.

After flying for two minutes, joined by wingsuit cameraman Scotty Nice -- who jumped from a helicopter to shoot the record attempt -- Andersson deployed his parachute and touched down. This time, however, he had another immediate goal in mind. He began the ascent of the 2,190m Stockhorn mountain, to tackle his next record attempt -- a precision flight to hit a tiny target.

Andersson told CNN Sport that, despite a rigorous training regime, the second climb of the day was a serious physical challenge, particularly as he neared the jumping off point.

"It was a kind of dizzy and light-headed feeling, you almost feel a little bit drunk," he explains. "You can't really think much more than about keeping the focus and breathing properly, to get enough oxygen through your body, because if you don't, it's easy to pass out, or have experiences that you don't want to."

Once in position, it was also a struggle to make out the 30cm x 30cm Styrofoam target positioned far below him.

"I remember standing on the edge trying to see the target that I was going to hit, but it was so small that I could barely see it from a distance," he explains. "We knew where it was, but it couldn't be seen from the cliff edge."

'Every moment is critical'

For such an intricate flight, details are enormously important, Anderson says.

"Everything from jumping off to hitting the sign and opening the parachute, every moment is really critical to making it safe, and not more dangerous than it already is."

Andersson launched off, swooping down the mountainside towards his goal. His trajectory was flawless, and he hit the target perfectly.

"It's so fast that you can barely say if you hit the target or not," Andersson recalls. "I mean I knew I hit it, but I didn't know I hit it so centrally."

The record breaker describes a feeling of enormous satisfaction when he landed.

READ: 'It's like meditation. It's beautiful to feel that small"

Having completed around 1,000 BASE jumps as well as 1,000 sky dives, Andersson believes he has learned a lot about pushing "managing fear.'

He added: "I want to find a way that I can develop that mindset and teach it to others. We don't take much risk in our daily lives, and I think risks are important in our evolution."

The two record attempts are in the process of being ratified by Guinness. In the meantime, the Swede is preparing to compete in the World Wingsuit League WWL Grand Prix in China in September

"I need to do these kinds of things to challenge myself," he says. "I feel like I'm growing as a person out of it."