Can anyone stop Juventus' march to a ninth successive title? 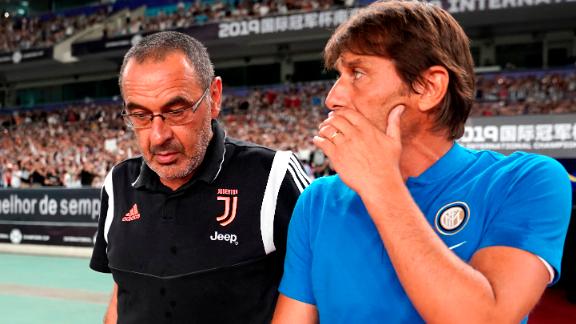 For eight long years, Juventus has dominated Serie A without much of a challenge from those below it.

This season, however, Italy's top three coaches will lock horns in what has the potential to be one of the most exciting title races in almost a decade.

Inter Milan, AC Milan and eight-time defending champion Juve have all changed manager since the end of last season and a flurry of transfer activity sees all three enter the new campaign with revamped squads.

Maurizio Sarri returns to Serie A after a one-year stint at Chelsea with the task of leading Juventus to domestic and European glory, while Antonio Conte arrives at an exciting, new-look Inter with genuine belief he can challenge for the Scudetto.

The pair could be joined in a thrilling title race by Carlo Ancelotti, who is now in his second season with Napoli and looking to close the 11-point gap between his side and Juve last season.

"It's become a little bit boring in Serie A over the last few seasons," Italian football expert Mina Rzouki told CNN Sport. "So having these three Italian coaches back in the Italian league I think is going to make it a lot more interesting.

"You just feel like nobody can really get close to Juventus but for the first time ever, when you mention these names and you know that Carlo Ancelotti has a great squad and you know his name alone inspires fear; you know Antonio Conte is back and he's with the biggest rival that Juventus have."

The Old Lady, bolstered by the addition of $84 million signing Matthijs de Ligt and the arrival of free transfers Adrien Rabiot and Aaron Ramsey, rightly go into this season as heavy favorite to retain its crown and win a record-extending ninth Serie A title.

Massimiliano Allegri's departure after five years in charge as head coach paved the way for Sarri's return to Italy following his one season in England with Chelsea.

Sarri's favored style of play -- known as Sarri-ball -- thrilled viewers across Europe in his final season at Napoli, as the Italian narrowly missed out on leading his hometown club to a first Serie A title since 1990.

Allegri, conversely, employed a more conservative and pragmatic style and Sarri's main task will be trying to convert a squad that has known nothing else for the past four seasons.

"I spent time with Juventus in pre-season and one of the things that Sarri said is that this team has been coached one way for four years and reeducating them, getting them to change, is going to take some time," journalist James Horncastle told CNN.

"It is an interesting fit because you had players in the Premier League (at Chelsea) who like to carry the ball, they like to dribble with the ball and that is something Cristiano Ronaldo does.

"So when it comes to opening teams up with this quick Sarri-ball combination play, there are some players in the team that I think are not conducive to that -- and one is the biggest star of the team in Cristiano Ronaldo."

READ: Cristiano Ronaldo back in the headlines -- without kicking a ball

Given its total domestic dominance, Juventus' obsession -- indeed, the reason it signed Ronaldo -- has become winning the Champions League.

The Portuguese himself said he believes this team can win the European Cup within the next two seasons and, at 34 years of age, the clock is ticking for Ronaldo to add to his haul of five.

Since last winning the competition in 1996, the Bianconeri went on to lose two consecutive Champions League finals and its luck hasn't changed in the intervening two decades, losing three further finals (2003, 2015, 2017) to reach an unwanted tally of five consecutive final defeats.

"We saw that last year, he did it in both legs against Ajax -- it wasn't enough even with him turning up. I think, ultimately, this is why they've taken a punt on Sarri."

If the new coach, who ahead of the new season's start was laid low by pneumonia, can quickly implement Sarri-ball and get this team purring like his Napoli of old, this new-look squad could be Juve's most exciting yet.

But should Juve take its eye off the ball domestically, the new and improved sides will be ready to take advantage.

"I don't think (Juve) will dominate quite like last year because I think the competition has got better," Horncastle says of the Bianconeri's Serie A opponents. "And there are some question marks about the new manager.

"In that, is he a good fit for Juventus? They're trying to do something very different with a manager who is very different from ones they've had in the past.

"But it's a very ambitious appointment and if he can implement that style of play with this group of Juventus players, it could be the best Juventus we've ever seen."

Pretenders to the throne

Inter Milan is arguably best placed to steal Juventus' crown this season and not solely down to the signings it has made on the pitch.

Conte returns to his domestic league for the first time since leaving Juve in 2014 for a two-year stint as head coach of the Italian national team.

The 50-year-old, who won the Premier League and FA Cup in two seasons at Chelsea, is in charge of an exciting new crop of youngsters headed up by the experienced arrivals of Uruguayan defender Diego Godin and Belgium forward Romelu Lukaku.

"With Antonio Conte at the helm of Inter, he will stop at nothing to win the Scudetto and put Inter back where he feels they rightly belong," Horncastle said.

"Conte, for me, is one of, if not the biggest signing that the league has had, be it a coach or player, this season. I think Inter will be a formidable opponent for Juventus this year and it will go very close."

Already in the mix from recent seasons is Napoli, whose settled squad could be ready to mount another title challenge after finishing 11 points back in second last term during Ancelotti's first, transitional season in charge.

"I think one of the reasons those guys have come back is because Serie A has an appeal again that it has lost," Horncastle said. "I think they, particularly Conte, want to win and if he doesn't believe he can assemble a winning team, then he's not interested."

Meanwhile, AC Milan has recently appointed its sixth manager since 2014 after failing to qualify for the Champions League for the fifth consecutive season.

Former player Gennaro Gattuso was the latest coach to walk out of Milan's revolving managerial door and was replaced by Marco Giampaolo following his good work with Sampdoria.

"Milan has been somewhat of an enigma over the last few seasons," football journalist Mina Rzouki told CNN Sport. "And this is going to be the task that Giampaolo has, to instill something into this new team that has been regenerated once again.

"Having them play beautiful and progressive football -- which is what the style is at Milan and we always know they are a glamorous team, they're not the hardworking Juve but they're the beautiful Milan -- and when you have coaches such an Ancelotti and Conte, I'm not entirely sure he can compete with them."

However, without the appeal of Champions League football, Milan has been forced to approach the transfer market from a different angle to its rivals.

An influx of exciting young talent, headlined by striker Rafael Leão and Real Madrid defender Theo Hernandez, provides an ideal template for Giampaolo to work with.

"This has the potential to be quite exciting," Horncastle said. "One of the reasons why Milan has signed Giampaolo is not only because his teams play really good football, they're great to watch and they do well against the big teams, but also for a team club that doesn't own its own stadiu and isn't getting into the Champions League -- how to you make money?

"You make money by signing young players who you develop and then sell on in some cases. Giampaolo has been fantastic at that."

Among those talented youngsters to be sold during his time in charge at Sampdoria were Milan Škriniar, Lucas Torreira, Bruno Fernandes and Patrik Schick.

Two seasons ago, when Napoli pushed Juventus to the penultimate match of the campaign and led the league table for long periods, it looked as though the Turin club's era of dominance was coming to an end.

However, last year's title procession reaffirmed that the best of the rest were still light years behind Italy's powerhouse.

This season, though, that could be about to change.