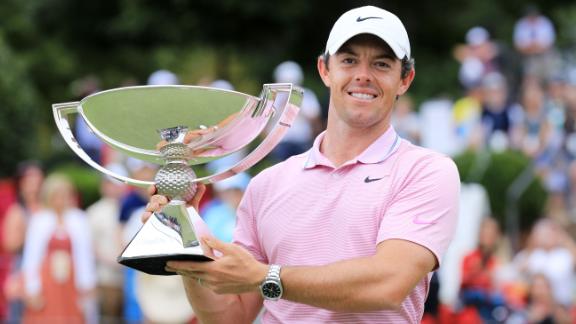 Fresh off victory at the 2019 Tour Championship, Rory McIlroy spoke to Patrick Snell about the new scoring system, his win and what to expect next year.

Northern Ireland's Rory McIlroy won the 2019 PGA Tour Championship on Sunday, and walked away with the $15m first-place prize money.

The victory handed the world No.2 the FedEx Cup title and he became only the second person behind Tiger Woods to win the Tour Championship title twice.

McIlroy shot a 66 in the final round, finishing 18-under-par, four shots clear of second-placed Xander Schauffele, who finished 14-under-par, pocketing a $5 million prize for second place.

And the fact that McIlroy has achieved something only Woods has done is a sign he's on the right track.

"Any time you can do something and Tiger's the only other guy to do it, you know you're doing something well," McIlroy told CNN.

McIlroy's victory at East Lake, Atlanta, was made even more remarkable following the rule changes introduced for the 2019 edition of the Tour Championship.

Players entering the final event were awarded a starting score based on their FedEx Cup rank, descending from -10 for the leader, down to level par for players ranked 26-30.

As a result, McIlroy started the tournament on five under par, five shots behind Justin Thomas -- the FedEx Cup standings leader.

And ahead of the competition, the four-time Major winner had questioned the new format.

"You can shoot the best score of the week and not win the golf tournament," McIlroy said.

"If that happens to someone it's going to be hard for them to wrap their head around."

Sunday's win was McIlroy's third of the season, following those at The Players Championship and the RBC Canadian Open.

He told CNN that 2019 "has almost been a kickstart to the second phase of my career."

Now, he says, he needs to text Woods to "say the race is on to see who can get to three" FedEx Cup wins.