Stephanie Frappart: 'I didn't think about breaking barriers or making history, only doing my job' 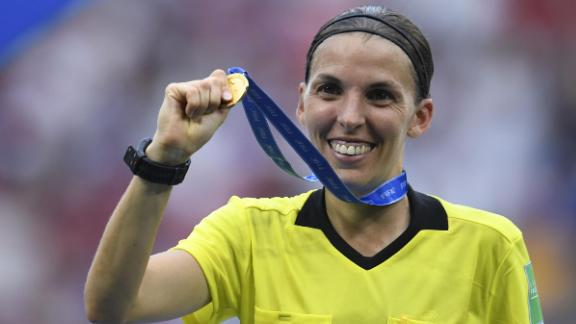 FIFA referee Stéphanie Frappart tells CNN what it was like refereeing the UEFA Super Cup, becoming the first woman to referee a top European football final

"When you're a referee, they're always shouting against you," Stephanie Frappart says with a smile. "But when we entered onto the field of play, everybody was clapping."

The French official is proudly recalling the reception she and her team, compatriot Manuela Nicolosi and Irishwoman Michelle O'Neill, received from the crowd when they walked out to take charge of the UEFA Super Cup final between Liverpool and Chelsea last month.

The trio made history that night in Istanbul, becoming the first female team to officiate a major men's European final.

"When we received the medal it was a special moment," she told CNN. "During the game you cannot feel it because you have to do your job, but when it's finished you realize what you've done."

O'Neill has a similar lasting memory from that evening.

"It was a pretty special feeling when you walked out in the stadium and the crowd were actually cheering for us," she told CNN. "I've never experienced that and in such a big, big match. In the warm up I looked around and I was like, the other teams aren't here so they have to be cheering for us.

"When you looked up at the crowd -- I normally don't engage with the crowd -- they were looking at us and a few were waving and giving us thumbs up and congratulations. I thought that was pretty special."

READ: Referee Stephanie Frappart 'not afraid' as she prepares to make history

Just a month earlier, they had reached the pinnacle of women's football by officiating in the World Cup final in France. It was a whirlwind month and one that transformed Frappart into a household name seemingly overnight.

Their performance in the Super Cup final drew near-unanimous praise and led Liverpool coach Jugen Klopp to comment: "If we would have played like they whistled, we would have won 6-0."

Frappart comes across as methodical and unflappable and, despite the fanfare that greeted the announcement of the all-female team, says the idea she was doing something more than just refereeing a football match did not enter her head.

"I didn't think about breaking barriers or making history, only doing my job and only that," she says matter-of-factly.

Perhaps that is because Frappart has become accustomed to making history. In 2014, she became the first female referee to take charge of a game in the French men's second division and earlier this year the first to take charge in the men's first division.

"So this pressure, I know the feeling," she says. "I know how I can manage it -- I think it was the same as the final of the World Cup. I always say the pressure is [from the] outside, not on my side."

She has been labeled a 'trailblazer' and a 'pioneer' but Frappart feels as though not much has changed.

"A lot of people recognize me in the street," she smiles. "This is only difference that I can feel."

The crack team of officials has been together for three years, joining forces at the start of the three-year cycle for referees and assistants that precedes a World Cup.

It's a grueling process that sees an initial list of more than 300 whittled down to just 27 referees and 48 assistants for the tournament proper.

The officials are gradually eliminated based on seminars, fitness tests and assessments of matches throughout the year in their respective federations, all of which plays into a grading in FIFA's system.

"It's up to you to stay on that list," says O'Neill. "You have to be part of that that small, small number of people on that list for the World Cup and there's so much work that goes into that so when you're finally picked to actually go to the World Cup, it's a huge emotion.

"Then it goes down to: How far in the tournament do I want to go? You're training every single day in the training camp for 40 days, fine-tuning your speed, decision-making, your match preparation and your mentality.

"When it came down to the crunch and we were picked to represent the rest of the referees in the final, it was just: 'I've done it.'

" All the work throughout the years of being a referee came down to this one moment of walking out and being on the world stage of the biggest tournament of our lives.

"And to be the first from Ireland to actually be in a World Cup final was huge again."

Frappart was told she would officiating the Super Cup final by Roberto Rosetti, UEFA's Chief Refereeing Officer, before it was then announced in front of her colleagues at the end of a seminar.

"At first I was surprised," she recalls. "I said: 'Huh? Okay.' And after that I think I realized more when everybody knew [about] this appointment, I realized then what's really going on."

Frappart's first job was to inform her assistants, O'Neil and Nicolosi, that she had chosen them to officiate with her.

O'Neill was on her way to officiate a friendly match in Ireland between Wexford Youths Women and Southampton Women when she received a video call from Frappart.

"I pulled in at the side of the road and Stephanie basically told me on the call that she has been appointed to the Super Cup final -- and that she was bringing us as her team," O'Neill recalls. "We were just like: 'Wow.'

"We had to actually turn and say: 'You mean the men's Super Cup final? Liverpool and Chelsea?' And she's like: 'Yeah, that one.' So we didn't believe it at first but when it sunk in, I was honored actually to be chosen as the trio for that match.

"Stephanie is a different breed, she's matter-of-fact, she's such a strong leader. She was super excited and we were excited at the time we found out, but then we quickly just get into match mode."

Both O'Neill and Frappart had similar experiences at the start of their refereeing careers, initially entering the sport as players before deciding to become officials.

Frappart was the only female official on her course but says the idea that she had to prove herself more isn't limited only to refereeing.

"I think this is society," she says. "As a woman you have more to prove and so in football it's more or less the same. But in my federation they give me my chance all the time, so I have no problem."

In the upcoming Under-17 men's World Cup, another trio of female officials have been chosen, along with three Video Assistant Referees and one support referee.

Frappart believes that eventually there will be no distinction between male and female officials and one day a female referee will take charge of a men's World Cup final.

"Now everything is possible," she says.