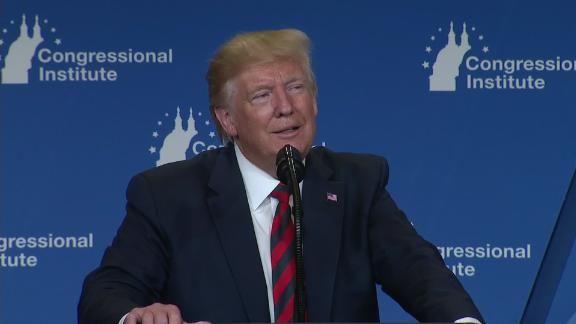 Let's get one thing straight, Donald Trump was orange long before the government phase-out of incandescent light bulbs began more than 10 years ago. Like his bizarre, pumpkin-colored coiffure, the President's complexion has been an unnatural phenomenon for at least a decade.

But with a quip delivered to Republican House members in Baltimore Thursday, Trump admitted he looks strange, though he insisted it's because of modern fluorescent and halogen lights. Bulbs have become an issue because the Trump administration is easing restrictions on the incandescent types that consume far more electrical power and, thus contribute to the pollution from fossil fuels that causes climate change.

"People said what's with the light bulb?" Trump told the group. "I said here's the story, and I looked at it: The bulb that we're being forced to use — No. 1, to me, most importantly, the light's no good. I always look orange. And so do you!"

The audience laughed at Trump's remark and it was funny, especially the part about how everyone looks orange because, in fact, we don't. Whether indoors, or outdoors, or bathed in the extreme light of a TV studio, nobody in public life is as orange as the President. It was the first thing I noticed about him when we first met back in 2014.

We were in the boss's corner office in Trump Tower, where windows that offered views to the north and the west admitted so much natural light that Trump could read his press clippings without even switching on a lamp. Like his hair, which is fashioned into mysterious swoops, even then the exact source of Trump's skin color was difficult to discern.

On TV he sometimes sports a powdery look. But the white skin often evident around his eyes suggests the goggles people wear for protection when they use a tanning bed. In person I thought I saw a cosmetic tanning agent at work and one expert quoted by the press agrees.

Whatever the cause, Trump has made such a bold statement with his skin tone that, as with his hair, there's no way he can retreat. There's no way he'll ever appear in public in his own, unaltered skin and if you think he'll let himself abandon that hair you haven't been paying attention. This is the man who in the 1990s said the worst thing an executive might do is go bald, according to John O'Donnell, a casino executive who ran the Trump Plaza.

Everyone at the White House seems to be playing along with the President, one senior administration official declaring that while Trump may sometimes use a translucent powder, his ruddy skin tone is the product of "good genes."

Check any photo archive and you'll see that Trump's genes didn't make him orange until sometime after the year 2000. Perhaps not so coincidentally, Trump featured a tanning product company on the Celebrity Apprentice TV show. The firm was owned by one of his rich friends, whose skin is also a rather unnatural-looking color. Among its brands is one lotion that encourages customers to "take your color to the extreme." Indeed.

Sure, that the President is able to joke about his appearance is a good thing. It shows he is more human, and less deluded, than his most ardent critics would suggest. However, the presidency is about policy, and this rare self-appraisal about his appearance should not be understood as merely a light-hearted moment—it is a distraction from a serious issue. The switch to efficient bulbs has cut household energy use and allowed everyone to play a part in addressing climate change.

Although some have tried to make a libertarian-type cause out of the light bulb mandate, complaining of government overreach, it's not exactly a burning -- forgive the pun -- issue with voters.

The real-world implications of the administration's change on bulbs ruined Trump's joke. And so we are left with the incontestable fact that the Orange Don's reversal on electric lighting is simply another example of his determination to destroy norms and defy common sense. In his businesses, and his politics Trump has consistently and callously shown a willingness to break the rules. And he often gets away with it. (At last count the President's lies and misstatements total more than 12,000, according to the Washington Post.)

Apparently the brazen attitude has been passed from the President to his offspring. As Politico reported this week, First Daughter Ivanka Trump, a White House official, recently told Republican donors that the main trait she acquired from her father is her moral compass. Presumably this wasn't a joke.

'It's a big deal': Parents react after FDA recommends vaccine for kids 5 to 11