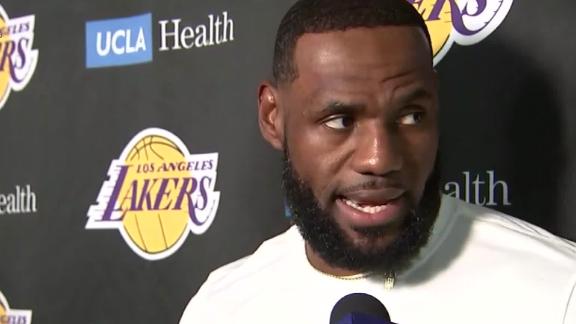 Basketball superstar LeBron James has finally weighed in on the ongoing NBA-China dispute, criticizing Houston Rockets General Manager Daryl Morey as being misinformed about the situation.

Basketball star LeBron James has finally weighed in on the ongoing NBA-China dispute, criticizing Houston Rockets General Manager Daryl Morey as being misinformed about the situation.

The league is embroiled in a standoff with China after Morey tweeted his support for the pro-democracy movement in Hong Kong. Morey quickly apologized and deleted his original tweet, but the league's Chinese partners suspended ties, state broadcaster CCTV halted all broadcasts of preseason matches, and the Chinese government said the NBA needed to show "mutual respect."

Speaking to reporters on Monday before a game in Los Angeles, James, who is known for speaking out on social justice issues, called it "a very delicate situation, a very sensitive situation."

When asked whether Morey should be reprimanded for his tweet, James responded, "I think when we all sit back and learn from the situation that happened, understand that what you could tweet or could say, and we all talk about this freedom of speech -- yes, we do all have freedom of speech, but at times there are ramifications for the negative that can happen when you're not thinking about others and you're only thinking about yourself."

"I don't want to get into a word or sentence feud with Daryl Morey, but I believe he wasn't educated on the situation at hand and he spoke. So many people could have been harmed, not just financially but physically, emotionally, spiritually. So just be careful what we tweet and what we say and what we do, even though yes, we do have freedom of speech, but there can be a lot of negative that comes with that too."

James, who plays for the Los Angeles Lakers, added that he and his teammates had stayed silent about the situation because they were "not informed enough" about it, and that "I'm not here to judge how the League handles the situation."

"I just think that when you're misinformed or you're not educated about something, and I'm just talking about the tweet itself, you never know the ramifications that can happen. We all see what that did -- not only for our league but for all of us in America, for people in China as well," he said.

Hong Kong has been gripped by more than four months of increasingly violent pro-democracy demonstrations, with hostility and anti-China sentiment ramping up among the protesters.

Hong Kong is part of China -- but as a former British colony, it's also a semi-autonomous city with its own language, currency, legal system, and freedoms of speech, press, and assembly.

The protest movement has been driven by persistent fears that those freedoms are now being slowly eroded, as China encroaches on the city's autonomy. In recent weeks demonstrators have burned Chinese flags, spray painted "Hong Kong is not China" across the city, and even attacked Chinese owned-businesses.

Beijing has taken a hard stance in response -- just this weekend, Chinese President Xi Jinping warned that any attempt to split China will "end in crushed bodies and shattered bones" according to state-media.

Many companies and brands have become caught in the crossfire. Those who sympathize with the protesters face Chinese fury and financial backlash; those who try to placate China draw accusations of cowardice from protest supporters in the United States and elsewhere. The NBA faced both of these last week as it tried to navigate the controversy.

In a tweet later Monday night, James clarified that he meant Morey wasn't educated on the repercussions of the Hong Kong tweet, rather than the situation on the ground.

"I do not believe there was any consideration for the consequences and ramifications of the tweet," he wrote. "I'm not discussing the substance. Others can talk about that."

He added that it had been "a difficult week" for the Lakers and the NBA.

"I think people need to understand what a tweet or statement can do to others. And I believe nobody stopped and considered what would happen. Could have waited a week to send it."

The NBA spat spiraled rapidly since Morey's original October 4 tweet of an image that read, "Fight for freedom, stand with Hong Kong." The tweet set off a firestorm in China almost immediately, and the NBA issued an official apology just days later, saying it recognized that Morey's views "have deeply offended many of our friends and fans in China, which is regrettable."

The league has spent years and many millions of dollars investing in China, helping to build courts, giving broadcasting rights away for free and bringing its stars over for preseason games.

China makes up at least 10% of the league's current revenue, according to one analyst, and the country is expected to contribute even more than that over the next decade, perhaps reaching 20% of the league's revenue by 2030.

But the apology drew widespread and scathing bipartism criticism in the United States, and the NBA issued a stronger-worded statement emphasizing freedom of expression in an attempt at damage control.

The next day, all 11 of the NBA's official Chinese partners suspended ties.

Through all of this, NBA players have stayed relatively quiet, making James one of the first to speak out on the issue. When CNN's Christina Macfarlane tried to ask Rockets players James Harden and Russell Westbrook about the NBA's position with China, she was shut down by a Rockets' media officer.

"It's already been answered," the media officer said.

"This is a question that's not been answered. James?" Macfarlane responded, to which Harden stayed silent.