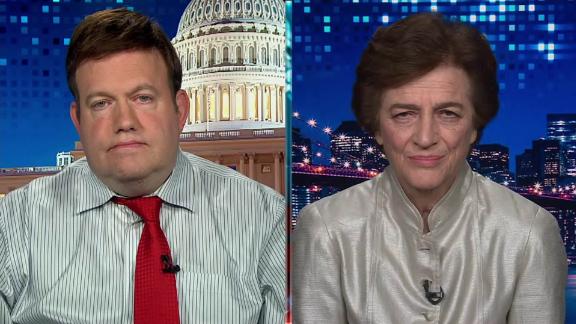 Congresswoman Elizabeth Holtzman - who sat on the House Judiciary Committee during Watergate - and political strategist Frank Luntz weigh in on the impeachment inquiry after a week of explosive testimony.

When the House votes Thursday on formal procedures governing its impeachment inquiry, the administration will no longer have a reason to argue that the impeachment inquiry is invalid without a full vote and that the proceedings are unfairly secretive and one-sided.

This argument was already on shaky footing. The Constitution gives the House "sole power of impeachment," without specifying any particular investigative process requirement. And the first round of closed-door House depositions are open to Republican and Democratic members of the investigating committees, all of whom have the ability to question the witnesses.

This week's vote should spike any remaining Republican gripe about the fairness of the process. The House resolution provides for open, public hearings in the House; grants subpoena power to Republicans (though subject to approval by Democratic committee chairs); requires a written, public report by the House Intelligence Committee setting forth its findings; and provides for transmission of all records and materials to the House Judiciary Committee, which is charged with ultimate responsibility for conducting impeachment proceedings.

Tellingly, the White House and other leading Republicans responded to the announcement of the vote not with satisfaction that their calls for a full vote and more process have been heeded, but rather with anger, seemingly more at losing yet another political talking point.

Trump's "perfect phone call" defense crashed upon release of the summary transcript of that call, highlighted by Trump's imperfect request of Ukrainian President Volodymyr Zelensky: "I would like you to do us a favor, though."

And last week saw the demise of "no quid pro quo," which sustained terminal damage with a contrary admission by Chief of Staff Mick Mulvaney (later walked back by a bizarre denial that Mulvaney said what he said) and the testimony of career diplomat Bill Taylor about a direct link between foreign aid and Ukrainian investigations of Trump's political rivals (to which Trump responded with ad hominem personal attacks).

And the testimony of Army Lt. Col. Alexander Vindeman -- a career military and diplomatic professional who was awarded a Purple Heart for sustaining injuries in combat -- further seals the deal.

According to Vindeman, who, as part of his duty, listened to Trump's July 25 call with Zelensky, Trump tied United States support for Ukraine to his demands for partisan investigations. Vindeman saw Trump's actions as improper and a threat to national security.

Thursday's vote will provide political benefits for House Democrats. It also will help legally as they fight to overcome White House stonewalling and compel witness testimony and other evidence. Multiple federal judges already have held that the House has broad subpoena power pursuant to its impeachment authority, even without a full formal vote.

To be clear: Trump and others likely will continue to make the aforementioned defenses. But with each passing week, those claims drift further and further away from any factual mooring. Eventually, the truth catches up.

Bob (South Carolina): Bill Taylor seems to have confirmed there was a quid pro quo with Ukraine. But how is a quid pro quo relevant and necessary in the impeachment process?

"Quid pro quo" is a Latin phrase meaning essentially "this for that" -- an exchange. Trump has repeatedly claimed there was "no quid pro quo" between him and Ukraine. But, as discussed above, that defense has sustained serious damage with the recent admission by Mulvaney and the testimony of Bill Taylor, the top US diplomat in Ukraine.

With respect to potential crimes, the existence of a quid pro quo is relevant to bribery, the essence of which is an illicit exchange. But quid pro quo has nothing to do with other potential federal crimes including extortion and solicitation of foreign election aid.

And remember: The House does not need a crime to impeach. Abuse of power or misuse of office is sufficient. If there was, in fact, a quid pro quo, the case for abuse of power -- hence, the case for impeachment -- becomes difficult to refute. I believe this is why Trump has unleashed vicious personal attacks against Taylor. Trump likely recognizes that Taylor's testimony could vastly increase the likelihood of impeachment and potential conviction and removal.

Tom (Illinois): What's the next step for the New York case in which Trump's team argued he could shoot somebody on Fifth Avenue without getting arrested?

Trump then appealed to the Second Circuit Court of Appeals. At oral argument, Trump's attorney contended that, even if Trump shot somebody on Fifth Avenue (as Trump once boasted he could do without losing voters), he could not be arrested while in office or even criminally investigated. While it is debatable whether a sitting president can be charged criminally, the notion that a sitting president cannot even be investigated is entirely novel and legally dubious.

The Court of Appeals should rule within the next several weeks. Given the absurdity of Trump's position I expect him to lose. Trump then can ask the Court of Appeals to consider the case "en banc" -- meaning the entire Court of Appeals hears the case, rather than the standard three-judge panel. En banc review is granted only in the rarest circumstances, and I do not expect the court to grant it here.

Chris (Illinois): What would happen if Trump refused to follow an order from the Supreme Court to release documents and comply with congressional subpoenas?

If Trump defies an order from the Supreme Court -- or any final order from a federal court -- then there are only two potential legal remedies.

First, the judiciary or Congress could refer the case to the Justice Department for prosecution for criminal contempt. It plainly would be contempt for a President -- or any person -- to simply defy a final court order. That said, current Justice Department policy counsels against indicting a sitting President, likely rendering this option toothless.

Second, Congress could -- and arguably must -- impeach. By refusing to comply with a final order from a federal court, the President would dramatically upset the balance of powers by essentially placing himself beyond the reach of both the legislative branch (by defying the subpoena) and the judicial branch (by defying the final court order). Impeachment and removal from office therefore would be the most effective -- and, really, only -- available legal remedy.

1. Will other public officials involved in Ukraine dealings -- including John Bolton -- testify, and what more will we learn?
2. Will the White House identify and execute a coordinated counter-impeachment strategy?
3. Will other Republicans follow the lead of Sen. John Thune in expressing concern about Trump's actions towards Ukraine?

Friend of victim speaks out after North Bend murders

Father of kidnap victim found in Wisconsin speaks out

No foul play suspected after body found along Willamette River