'It has been too long': Gold Star spouse urges Congress to repeal 'widow's tax' 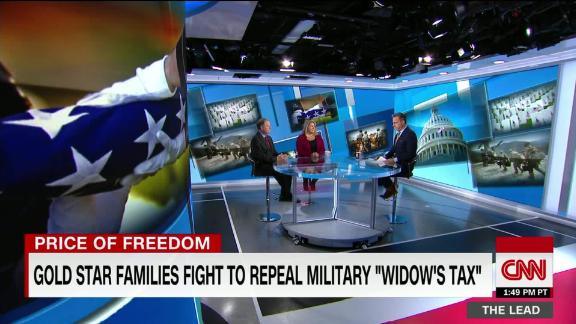 Kristen Fenty has been waiting 13 years for a change in the survivor benefits for military spouses that would mean thousands more dollars per year. Now, renewed action in Congress has her feeling hopeful that her wait is over.

Her husband, Lt. Col. Joe Fenty, was killed in action in Afghanistan on May 5, 2006. He had served for 20 years. He was buried at Arlington National Cemetery on May 23, 2006, his sister's birthday.

Before his burial, Fenty not only had to make funeral arrangements, she also had to make lifelong decisions about two financial benefits available to surviving spouses: a nontaxable monthly stipend of about $1,300 from the Department of Veterans Affairs' Dependency and Indemnity Compensation, and an insurance annuity from the Department of Defense's Survivor Benefit Plan, whose amount varies.

Fenty said she was told she could receive the Defense Department benefit in her name for life with an offset for the amount she got from the VA -- or receive the full benefit in her daughter's name, but only until the girl reached adulthood or graduated from college.

"It was very confusing to figure out what plan would work," she told CNN on Wednesday. Fenty said she ultimately chose to have the benefit placed in her daughter's name.

Under current law, Gold Star spouses cannot receive the full amount of both benefits. Every dollar received from the VA benefit is deducted from the Survivor Benefit Plan payments, an offset called the "widow's tax." An estimated 65,000 Gold Star families are affected by the offset.

Fenty's daughter is now 13, and the benefits are still in her name. Fenty said that not being able to receive the full benefit is a "financial injustice" that causes "emotional harm."

"Our family was left with 13% of the income that my husband was earning. But now it will go away," she said. "Our spouses paid for this benefit with their lives, with their service, as well as deferred compensation contributions to ensure a retirement benefit to which our survivor benefit is attached. This is not gratuitous. It's an earned and purchased benefit. Purchased through service and deferred compensation through duty. And by premium post retirement."

Further, a recent change in how the IRS handles survivor benefits paid to children, which are now treated like stocks or other inheritances, has drive up taxes by thousands of dollars for those who put the benefits in their children's names.

She said she has not spoken with anyone from the Trump administration about the survivor benefits, because she is waiting to see if Congress will act. But she has a message for the President.

"My message for him would be show leadership and voice support for this benefit," Fenty said. "And when it comes across his desk to please sign off on it. It has been too long. Please help expedite it."

Less in benefits, more in taxes

For years, Fenty has been to Capitol Hill advocating not only for herself, but also for other Gold Star families. She said the strain that not receiving the full benefit has on families' finances depends on their circumstances. She said that some surviving spouses have lost their homes and are facing high taxes.

"We've moved 16 times in 19 years. I've worked since I was 14 years old. I have never vested in a retirement plan. In my case, I'm fortunate: I've always been a professional," she said. "I have multiple degrees, I'm pretty high-functioning in the workplace, but I never really had the opportunity to move up the salary ladder before I was starting over again, and never vested in a pension, so we planned on my husband's retirement and then the attached survivors benefit for our family."

The loss in benefits is not the only financial burden. Fenty said she has lost nearly $200,000 in taxes just on her daughter since her husband's death.

"We have lost more in taxation than we would have with the offset, and I would have kept the benefit for life," she said.

In April, a US Department of Treasury spokesperson told CNN, "We are deeply grateful for the sacrifices made by our brave service members and their families and we are evaluating what can be done to solve this issue and provide relief to the families of our fallen heroes."

Hoping that 'finally, Congress will wake up'

Various bills to repeal the offset have been introduced in Congress over the past 18 years. Most recently, Democratic Sen. Doug Jones of Alabama and Republican Sen. Susan Collins of Maine, both members of the Senate Armed Forces Committee, introduced legislation to repeal the "widow's tax."

In September, the Senate voted 94-0 urging House-Senate conference committee members to include the measure in the National Defense Authorization Act for the 2020 fiscal year. Jones told CNN's Jake Tapper on "The Lead" on Wednesday that the bill is now in conference and he believes legislation will pass this time because it has bipartisan support.

"Everybody, I think, now, Jake, recognizes that for 40 years we have neglected our duty and our obligation to the very people that served us and gave us their all," he said. "I am hoping that, finally, Congress will wake up. You know, for years Congress sits around and we talk about and go to Memorial Day celebrations and Veterans Day celebrations. And we talk about our devotion to service men and women, but yet this is happening for 40 years. It's time, I think, that Congress put its money where its mouth is."

Fenty said she is hopeful and believes it is the will of Congress to end the "widow's tax."

"If it doesn't pass, I think it is time to stop shaking hands and taking photo ops with people who don't stand behind their word. And be very clear about why it has not passed."