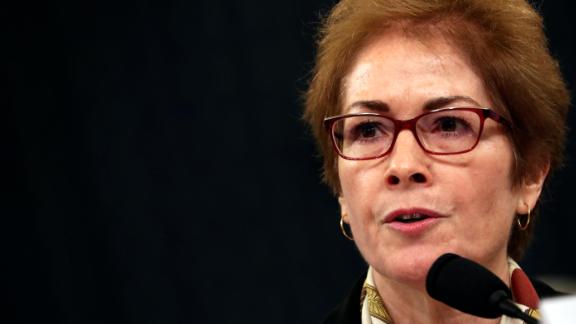 Former US Ambassador to Ukraine Marie Yovanovitch says the State Department failed to push back as "foreign and corrupt interests apparently hijacked our Ukraine policy."

On October 11 the world watched as the former US ambassador to Ukraine Marie Yovanovitch strode boldly into the Capitol. In a basement room away from cameras, she addressed the House Intelligence, Foreign Affairs and Oversight committees. Her deposition lasted more than nine hours.

A foreign service officer for 33 years, Yovanovitch was directed this spring while in Kiev to "get on the next plane" to Washington. She told the committees that she'd been dismissed as ambassador thanks to "unfounded and false claims by people with clearly questionable motives." Her anti-corruption work in Ukraine may have rankled those who "believed that their personal financial ambitions were stymied" by her efforts.

In fact, the key question in the impeachment inquiry is to discover whether President Trump has sought to serve the American people, or only himself.

That same night I was hearing from experts here inside the Beltway saying that her testimony could be a turning point in the undoing of the President of the United States.

According to Yovanovitch's testimony, the Deputy Secretary of State John Sullivan told her there had been a "concerted campaign" against her, and that the President himself had pressured the State Department to remove her from the post. In a dismaying but no-longer unusual parallel, she faced the kind of bullying at home that she was fighting abroad.

More than a decade ago, Yovanovitch and I sat down for breakfast in Bishkek, Kyrgyzstan. As "Swanee" and "Masha," we compared notes about our work with Kyrgyz women leaders. As we talked, I realized that Masha was herself an American role model in a country where strong women who led civil society held precious few positions in their corrupt government.

Career diplomats tend to succeed by following orders, or by quietly stepping aside if they cannot. In a strikingly courageous move, Yovanovitch defied our executive branch by responding to a subpoena from a separate but co-equal branch of government. With her choice to cooperate, she laid a foundation. Perhaps Ambassador Bill Taylor, who took over the embassy in Ukraine after Yovanovitch's removal, has been emboldened by his predecessor's decision to speak out.

CNN recently published a gallery of "Who's Who" in the unfolding drama. Tucked in the long gallery of (mostly tainted) men are pictures of two gutsy women -- House Speaker Nancy Pelosi and Ambassador Marie Yovanovitch.

Coincidently, while the ousted ambassador was testifying, I was on a dais of the State Department at the other end of the National Mall, addressing high-level officials, including some from the Ukrainian border. The theme assigned to my panel was "Leaders in Action: Women Diplomats on Decision-Making Roles ‎in Peace and Security."

We told the officials that paradoxically women can usually go places men can't without being killed; after all, how threatening can second-class civilians be? Also, women generally are less enamored with weapons; instead, they are ferociously committed to peace so that housing and schools won't be destroyed, but even more, to protect their sons from being killed, husbands maimed, and daughters raped.

Statistically, as a group, women are conciliators, adept at working across aisles, whether in the District of Columbia or the nation of Colombia. And because they have their fingers on the pulse of their communities, they often have valuable knowledge, for example, about which boys -- their neighbors' or their own -- have guns stashed under their mattresses. That community-based understanding is one reason peace agreements they help write last much longer than male-only efforts.

For decades, I've been hearing from high-ranking officials in dozens of countries that women are more trustworthy than men. It's why since 1999 I've brought scores of influential women from nations at war to lecture at the Kennedy School of Government.

Three years ago, Ukraine was one of those countries, and the heroes with whom I sat on the forum stage included Olga Bogomolets, a physician, parliamentarian and 2014 presidential candidate: "Don't wait for messiahs to change your country -- just be them," Bogomolets told the audience.

Another member of Bogomolets' delegation was Oksana Romaniuk, a journalist hacked and harassed for her activism, who managed to push five media reforms through the legislature. And at their side was Iryna Brunova-Kalisetska, an opposition leader forced to flee Crimea for denouncing Russian propaganda in the region and Russia's use of religion to mobilize dissent.

These three, like Yovanovitch, are in good company -- which includes Hillary Clinton. In contrast to the integrity of these women, Trump's own machinations have become utterly transparent, as he and his sidekick Rudy Giuliani feebly try to deflect evidence of their apparent corruption. After all, in 2016 the Trump campaign's signature strategy of projecting accusations back onto the accuser helped put him in the White House.

In 2008, when Clinton lost the primary race to Barack Obama, she said her voters had left 18 million cracks in the "highest, hardest glass ceiling." I would add that three years ago she pierced it. Despite rampant interference in our presidential election, her landslide victory in the popular vote opened a chasm through which tens of thousands of risk-takers like Bogomolets, Romanium, Brunova-Kalisetska — and now Yovanovitch — are surging. Pushing through in their fight against corruption, they are disrupting the course of history.

One person taken to the hospital after assault