Jesse Marsch: 'I don't just want to be some American guy trying to coach' 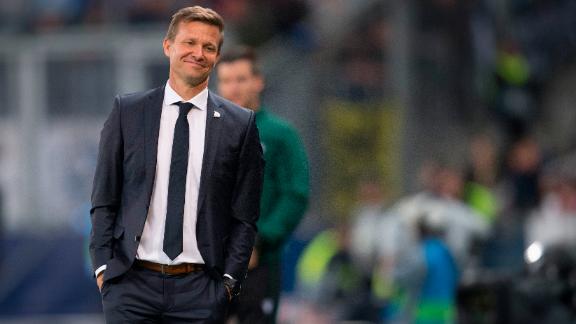 Forget the American dream. Red Bull Salzburg coach Jesse Marsch is living the European soccer dream and is on a mission to change stereotypes.

When Salzburg beat Genk 6-2 in the Austrian club's first Champions League game since 1994, Marsch became the first American to manage and win in the competition.

"I don't just want to be some American guy trying to coach. I want to try to really embody so much more than that", Marsch told CNN's Alex Thomas.

Salzburg's domestic results speak for themselves. The club is currently top of the Austrian Bundesliga having scored 58 goals in 15 games this season. But the Champions League has proved more challenging and tough clashes against Liverpool and Napoli means Salzburg has just one win from four games in the group stage so far.

Salzburg certainly cranked it up a notch when they saw red at Anfield, coming back from 3-0 down at half-time, before narrowly losing 3-4 to the European champion.

READ: Force is with Flamengo as River stunned in Copa Libertadores

"What makes it a little bit unique is, it's an American speaking German coaching an Austrian team," explained Marsch, who admitted he wasn't aware the footage was going to be released.

The Wisconsin native arrived to work in Europe in the summer of 2018, when he was appointed assistant manager to Ralf Rangnick at German Bundesliga club RB Leipzig. He then joined Salzburg a year later with a contract until 2022.

Rangnick played a huge role in Marsch's development as a coach, according to the American, introducing him to "high level thinking in terms of tactics and football in Europe."

The other, perhaps more surprising influence is Bob Bradley, who coached Marsch at Princeton University and later at D.C. United and Chicago Fire in Major League Soccer.

Bradley now coaches Los Angeles FC and was the first American to manage a English Premier League club in 2016 — he was infamously sacked after only 85 days in charge of Swansea City.

"I know that the opinion of Bob in England is mixed and then there are a lot of negative thoughts about having an American coach in the Premier League, but for us in the US it was a big moment," said Marsch.

During his short Swansea spell, Bradley was criticized by UK pundits for being 'too American,' but he quickly shot back at his critics.

"Sometimes I'm going to say 'field' instead of 'pitch' and I could try to sound like I'm from the UK. But it would come off very poorly, and that's not who I am."

READ: Mourinho and Spurs: A match made in heaven ... or hell?

Marsch admitted he didn't experience anything similar in Leipzig or Salzburg but stressed the road to acceptance in Europe starts with cultural appreciation.

"He [Bradley] wasn't able to have the success we were all hoping that he would and It's also key to understand some of the reasons why it's (soccer) cultural here in Europe. It's really important for me to understand the language, the people," Marsch explained.

Salzburg's coach speaks fluent German, only slipping into English when he gets emotional — Marsch even knows the differences in dialect between German in Leipzig and German in Salzburg.

He has succeeded in destroying stereotypes of American managers in Germany and Austria but said it was easy to adapt after already having worked with the Red Bull franchise as manager of the New York Red Bulls.

"When I moved to Leipzig, there had been a previous relationship, so I had known the people and I wasn't really treated like an American."

Yet, it's the English Premier League he sees as a challenge, as Bradley remains the only American to have managed there to date.

"It depends a little bit where you go. How will an American make their way specifically into a place like the Premier League? Yeah, I believe there's prejudice against American coaches in the Premier League. But in the end, somebody has to try to change that and I don't know if that'll be me," Marsch told CNN Sport.

Besides learning the language and immersing himself in local culture wherever he has coached, the support Marsch got at Leipzig and now Salzburg have been crucial for his success.

"I was treated like a young coach that was coming up through the system that they believed in and I think it's helped. That kind of support has helped me be successful in general in this world.

"Whether it's the Premier League, whether it's the Austrian Bundesliga, coaches need to be surrounded by environments where people believe in them and support them."

For Marsch, success isn't measured in the number of trophies. He thinks It's all about "creating a positive learning environment where people can thrive and be their best."