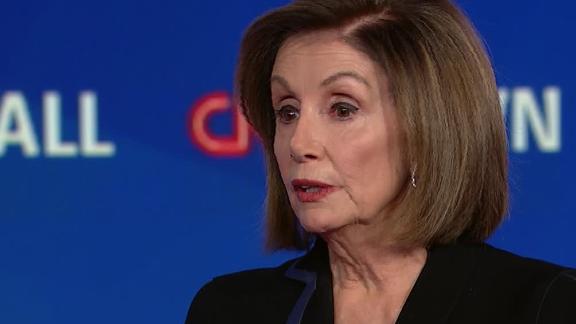 "Can we not have any more questions about impeachment?" Nancy Pelosi asked halfway through her CNN Town Hall meeting.

Hours earlier, Pelosi had stood on the Speaker's balcony, and announced on live television that the House Judiciary Committee and other house chairs will draft articles of impeachment against President Trump. The statement brings us closer to the third presidential impeachment in US history, and naturally became the focus of the town hall.

Pelosi said, with a straight face, that the impending impeachment of President Trump, which she has ordered and directed, was not about politics.

"It's about honoring our oath of office," she told the audience. "Politics is not even a consideration in this."

That is the kind of thing that leaders like Pelosi say when they know the politics are lined up in their favor. And, of course, Pelosi has clearly considered the politics: Her decision to push forward with impeachment is a sure sign that Democratic leaders believe voters will support and reward their actions.

Polls indicate that more Americans support impeachment than not. Support for removing Trump from office has increased in the last two months, thanks to Pelosi's methodical staging of tightly-managed public hearings designed to make a public, easy-to-understand case that Trump has abused power, obstructed Congress and violated his oath of office.

Along the way, Pelosi's own stock has risen. As CNN's Harry Enten noted in October, "Pelosi is arguably the most popular nationally-known politician currently holding federal elected office," and has higher favorable ratings than Trump or Pence.

That didn't happen by accident.

Pelosi has served in the House for 32 years. She was born into a political dynasty: Her father and brother both served as mayors of Baltimore. She is the first female Speaker of the House, and the first person in nearly 60 years to hold the office twice.

It's safe to say that Pelosi does not get out of bed in the morning without considering the politics of putting on her slippers.

Since impeachment enjoys considerable public support, thanks to her political acumen, Pelosi has room to speak like a statesman.

Over and over during the town hall, Pelosi cited the Founding Fathers, describing impeachment as a constitutional obligation forced upon members of Congress by Trump's actions.

She referenced an oft-cited quote -- "the time has found us" -- from the author Thomas Paine, who said that history had forced him and his fellow Revolutionary War-era agitators to take a stand.

"I truly believe the times have found us to protect and defend our democracy," Pelosi told the town hall audience. She also reminded them that in 2008, during her first tour as Speaker, Pelosi shot down efforts by liberal House Democrats to remove then-President George Bush from office over the Iraq War.

Back then, Pelosi bluntly declared impeachment to be "off the table" and allowed a motion for impeachment by Rep. Dennis Kucinich to die in committee.

This time around, Pelosi has no such qualms. "I have to admit that today was quite historical," she said at the end of the town hall. A bit of modesty from the most powerful woman in America.

Brush fire breaks out near Springfield

Former Thurston teacher accused of sex abuse back in jail

Experts say risk of getting blood clots from Johnson & Johnson vaccine vs. coronavirus is low