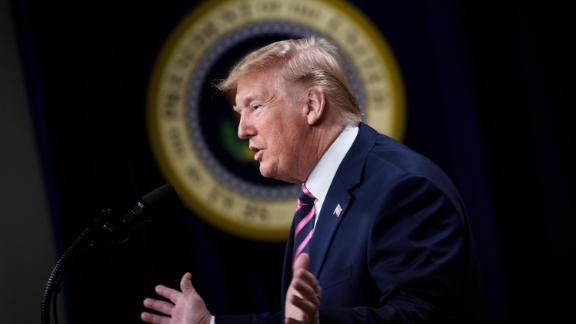 The American public is about evenly split over whether President Donald Trump should be impeached and removed from office, according to a new CNN Poll conducted by SSRS. CNN's David Chalian reports.

A new CNN Poll of Polls finds opposition narrowly outpacing support for impeaching and removing President Donald Trump from office -- 46% believe Trump should be impeached and removed from office, 49% don't.

This Poll of Polls includes national polling conducted between Dec. 4 and 15 by telephone and averages results among registered voters across the polls.

The newest poll, from ABC and The Washington Post on Tuesday morning, found 48% of registered voters want Congress to impeach and remove Trump from office, just above where CNN's recent poll, out Monday night, found support for Trump's impeachment and removal (45%).

Support for impeaching and removing President Richard Nixon was similar to this level in the spring of 1974, according to a Harris poll with similarly worded questions, and ticked over into majority support for impeachment in June of that year. Nixon resigned in August 1974.

Of all the polls in CNN's Poll of Polls -- released between Sunday and Tuesday -- Monmouth University poll found the lowest support for impeachment and removal (44%) while Fox News found the highest (50%). However, with only a six-point spread between the six polls conducted in the same period, they all show similar results.

All these polls show stark partisan and gender divides on impeachment, many finding higher shares saying Trump behaved improperly than those who support impeachment. Others show a higher approval rating for how Democrats in Congress are handling the hearings versus how Republicans in Congress are, while Trump's handling of impeachment lands at around two-in-five.

Most polls show the hearings haven't made a big difference on public opinion, with little movement over time on impeachment in most polls. And most voters say that not much could change their mind on impeachment at this point.

I-5 southbound reopens near Albany after semi crash