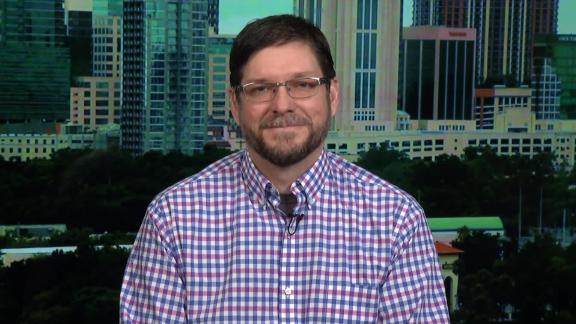 Napp Nazworth, former editor for The Christian Post, said he had "no other choice" but to resign from his job after the Christian news website issued a strong editorial supporting President Donald Trump.

A former editor for The Christian Post said Thursday he had "no other choice" but to resign from his job after the Christian news website issued a strong editorial supporting President Donald Trump.

"When I was told this would be the position of the paper, of the news site, I said that's not something I can support," Napp Nazworth, who announced on Monday that he had resigned from The Christian Post, told CNN's Alisyn Camerota on "New Day."

Nazworth's resignation came amid a heated debate among evangelicals about Trump, who enjoys overwhelming support from the community despite his controversial public behavior and comments.

The controversy began last week, when a rival publication, Christianity Today, published an op-ed that called Trump morally unfit for office and called for his removal. In response, The Christian Post denounced the article, insisting that Trump's support among evangelicals remains strong and slamming the impeachment process -- arguing that a "government of elites" has compromised constitutional due process.

"We've never sounded like that before. That's not the types of positions we take in the past," Nazworth told CNN on Thursday, adding that his former employer's position on impeachment sounds like "some odd sort of conspiratorial thinking."

He also likened the Christian news website to the far-right website Breitbart, which is supportive of the President and his policies.

Nazworth brought up how the editors had all worked together previously on an anti-Trump editorial in 2016 with the headline "Donald Trump is a scam."

"We all agreed back then and understood who Donald Trump was," Nazworth said. "I didn't change my mind about Donald Trump, but some of the other editors did."

"I'm worried now that without me there, that, you know it will no longer be a place that presents the alternative view to team Trump and the evangelicals who support him," Nazworth said.

He added that he didn't want to leave.

"I warned them. If you go down this road and join team Trump, then that will destroy the reputation of The Christian Post," Nazworth said, adding, "We had reached the impasse and I really had no other choice but to leave."

In response to his initial resignation announcement, the Post told CNN on Tuesday that it "does not normally discuss personnel matters" but that it's "so very grateful for Napp's contribution over these many years and we wish him the best." The publication declined to add additional comment on Thursday.

White evangelicals form a major part of the foundation of Trump's political base and its leaders are among his most outspoken supporters. Trump won 80% of the vote among white born-again or evangelical Christian voters in 2016, according to CNN exit polls, and he's counting on their support as he seeks reelection in 2020.

Need a face mask? Here’s how to make one yourself

McKenzie-Willamette furloughs some employees amid COVID-19