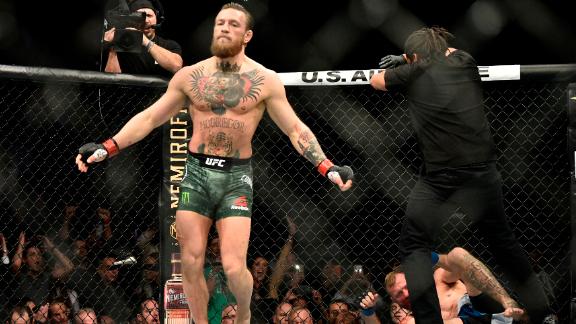 Irish mixed martial arts fighter Conor McGregor was victorious in his first UFC match in over 15 months, with a technical knockout win over American opponent Donald "Cowboy" Cerrone in Las Vegas, Nevada. McGregor blitzed Cerrone from the opening bell and won the fight less than a minute into the first round.

McGregor improves his career professional record to 22-4 with 19 knockouts. Cerrone, the UFC's all-time winningest fighter, drops to 36-14 in his professional career.

This was McGregor's first time in the octagon since a loss to Khabib Nurmagomedov on October 6, 2018, and a night some thought might never happen. In March of 2019 McGregor tweeted that he planned to retire, then hinted at a future UFC fight the very next week.

McGregor's most recent victory in mixed martial arts came in November 2016 when he won by knockout over Eddie Alvarez.

Despite the long layoff, McGregor is the fourth ranked lightweight in UFC. He is 13th on the pound-for-pound ratings.

Cerrone is ranked fifth among lightweights.

The two fighters, however, competed in a heavier division, as welterweights.

Romance writer accused of murder seeks release due to coronavirus

Bernie Sanders drops out of the 2020 race, clearing Joe Biden's path to the Democratic nomination